New York: In the last 24 hours 20,000 people in Idlib packed their belongings and fled to escape bombing.

Mostly women and children, they travel in open trucks or by foot during the day and at night. As they move, they look to the sky and wonder if they are about to be bombed. 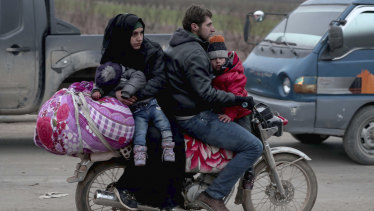 Civilians flee from Idlib to find safety inside Syria near the border with Turkey on Tuesday.Credit:DHA/AP

They head north and west into the ever smaller space considered safe near the Turkish border. Most camps are full. Many sleep in the open in fields. The crisis in north western Syria has reached a new level.

What the people of Idlib need is an immediate cessation of hostilities. The attacks on civilians and infrastructure in the region are unacceptable. They must be brought to an end. 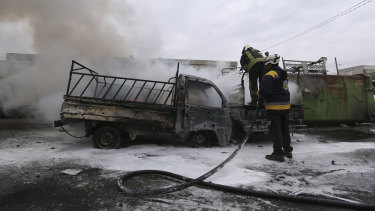 Firefighters hose a truck after a Syrian government airs trike in the city of Idlib on Tuesday.Credit:AP

The people of Idlib have nowhere left to go – many have already moved several times. Where they go the bombs follow.

Syrians I spoke to in the city last month are traumatised. They feel abandoned by the world. "We are afraid. Please help us. Make it stop" they say.

Trucks loaded with food, shelter materials and water continue to arrive in the north west from Turkey. A massive humanitarian operation is under way for more than 440,000 people in urgent need.

This month alone more than 230 trucks carrying assistance have been sent into the area through the Bab al-Hawa and Bab al-Salam border crossings, as authorised by the Security Council. This is in addition to the 1227 trucks sent across the border in January.

But the relief operation is overwhelmed. A humanitarian warehouse was bombed a week ago. Many organisations have had to relocate their staff and facilities. Three humanitarian workers were killed in the last fortnight.

Schools are closed. More than 70 hospitals and health centres have closed their doors. There is a serious risk of disease outbreaks. Basic infrastructure is falling apart. 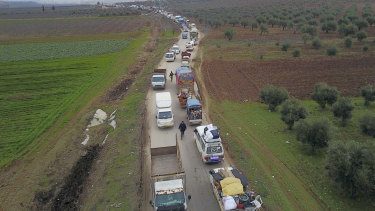 Civilians flee from Idlib to find safety inside Syria near the border with Turkey on Tuesday.Credit:DHA/AP

The horrible truth is the humanitarian disaster unfolding is far bigger than the humanitarian system's capacity to respond. This should not come as a surprise to anyone. We have been warning of it for months.

Time is short. Front lines have now moved to within a few miles of Idlib, the largest urban centre in north western Syria. What happens next will depend on whether a solution can be found to ease the situation for those still in harm's way. The only option is a ceasefire. When will the carnage stop?

I have briefed the UN Security Council month after month on the consequences of inaction.

Since last summer we have seen deadlock and division. Calamity can only be avoided if Security Council members, and those with influence, overcome individual interests and put a collective stake in humanity first. That requires difficult decisions, especially from council members with veto powers. The parties to the conflict have a legal and moral responsibility to respect international humanitarian law.