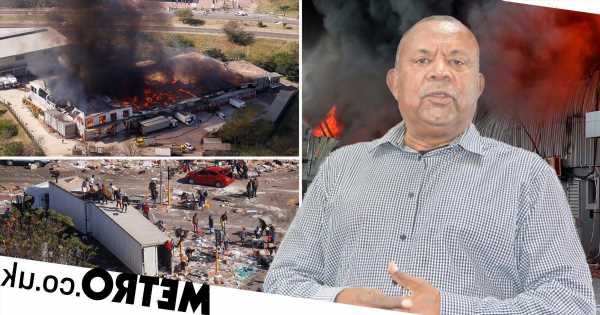 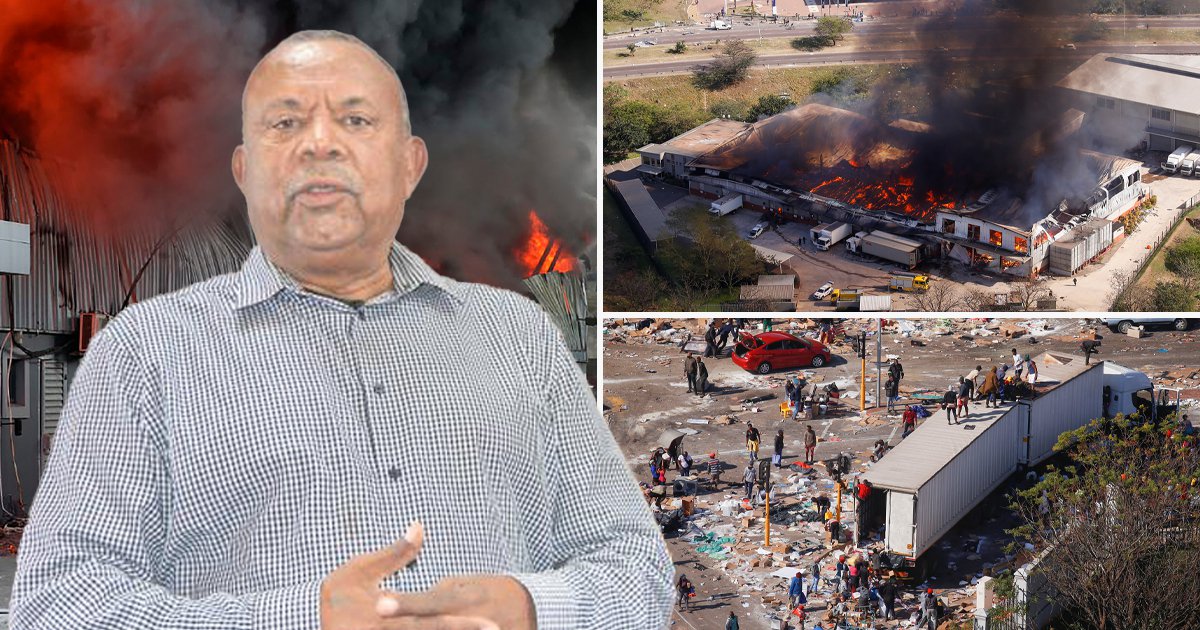 A South African pastor in a province ravaged by looters is manning the barricades to protect his neighbourhood.

Donny Anderson said his community in Durban has been ‘living in fear’ due to the lawlessness which has given way to food shortages.

The clergyman is asking people across the world to keep South Africa in their prayers and said he still has hope the country will recover, despite warehouses being razed to the ground.

He told Metro.co.uk: ‘I’m filled with emotion, there’s a sense of hurt and anger at what is going on.

‘There’s been lawlessness, unruliness, looting and no regard for people’s property. We have been safe but in surrounding areas it’s been total chaos.

‘Because of the numbers the police force can’t assist or do anything about it. You see people are helpless but there’s nothing you can do to assist or help.

‘The most difficult part is living in fear at what’s going to happen.

‘We are so grateful for the people who manned these posts, a few people tried to get in but they were repelled, and we stayed safe.’

Rioting, looting and violence sparked by the arrest of former president Jacob Zuma has engulfed the city in the eastern KwaZulu-Natal province. Huge food stores have been raided and torched, while the death toll stands at 72.

Pastor Anderson has been with his congregation and wider community of 60,000 people in Austerville as they keep up a 24-hour barricade.

The clergyman, of the Apostolic Faith Mission of South Africa, is trying to spread calm while helping his community keep out the looters.

The Government has sent an extra 25,000 soldiers onto the streets in an effort to restore calm and stability, which Pastor Anderson says has made a difference to the unchecked disorder of the past five days.

As the barricades are scaled back, he described huge queues at the few stores able to reopen.

‘It’s going to take quite long to get back to normal,’ Pastor Anderson said.

‘It’s going to take months because the major food warehouses were not just looted, they were burnt also.

‘The people who work there will be out of jobs. At the moment there is a lack of food supply, we haven’t had bread since Sunday.

‘Slowly but surely the shops are opening but there’s limited supply and there’s an influx of people going to the supermarkets and malls. The lines are so long people going to buy necessities are being turned away.’

The unrest is widely regarded as the most serious witnessed in the post-Apartheid era. While millions of South Africans live on the breadline, and have been hard-hit by the pandemic, the level of wanton destruction has seen huge warehouses reduced to charred shells.

Zuma, 79, was jailed for contempt of court after failing to appear in front of investigators accused of stealing from taxpayers during his nine-year presidency. In his absence, he was sentenced to 15 months in prison and on Sunday night he handed himself over to the authorities.

In a first-person piece for Metro.co.uk, journalist Pamela Owen described how protests by his supporters spiralled into chaos, with residents in Durban kept awake by the sounds of gunfire and looters setting off petrol bombs.

The army was deployed on Monday to quell the disorder, with more than 1,700 arrests so far. As relative calm is restored, the cost of the damage to the national economy is estimated in the hundreds of millions of pounds.

Along with other ministers at his church, Pastor Anderson is taking part in a national prayer for South Africa until July 25.

The married father-of-three knows all too well the pitfalls of the country’s fraught social order, having previously told the Southlands Sun how he joined a gang in his youth before committing himself to the church at the age of 20.

But he told Metro.co.uk he believes South Africa can pull back from the brink, despite the apocalyptic scenes.

‘It’s going to be an uphill battle,’ Pastor Anderson said.

‘But if we all put our heads together irrespective of who we are and what we are we can make it a better place for our kids and our grandkids.

‘For now, we are over the worst and we are praying that it stops completely so we can get back to normal and start rebuilding. We would ask people in the UK and around the world to keep us in their prayers.’