Theresa May today fought to defuse Brexiteer fury at ‘backstop’ plans to keep Britain tied to the customs union to avoid a hard Irish border.

The Prime Minister said the proposal was a last resort and would have to be for a ‘limited time’ as she denied caving into Brussels.

The Irish border has become the critical issue in Brexit negotiations, with the UK and the EU engaged in bitter wrangling over how to avoid imposing ‘hard’ customs checks.

Brussels has dismissed the government’s options of either a customs partnership or a ‘Maximum Facilitation’ technological solution. 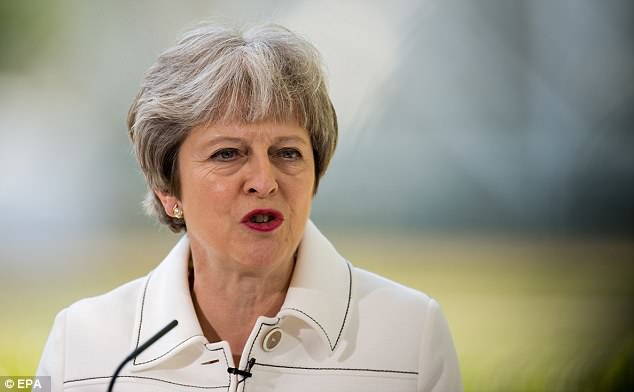 Delivering a speech at Jodrell Bank today, the Prime Minister said the ‘backstop’ proposal would only be for a ‘limited time’ as she denied caving into Brussels

A divorce deal struck by Mrs May before Christmas included a backstop that if no other solutions were found to avoid a hard border, the UK would stay aligned to EU rules in key areas.

However, a legal text of the document produced by Brussels since then has been condemned as unacceptable by the PM as it would effectively draw a red line down the Irish sea and split the UK.

Speaking during a visit in Cheshire today, Mrs May said the UK’s counter-proposal for a backstop would be a last resort – and would only be permitted for a ‘limited time’.

WHEN WILL BRITAIN BE OUT OF THE EU?

October 2018: Political agreement on the future partnership due to be reached

Early 2019: Major votes in Westminster and Brussels to ratify the deal

March 29, 2019: Article 50 expires, Britain leaves the EU. Transition is expected to keep everything the same for about two years

December 31, 2020: Transition expected to come to an end and the new relationship – if it has been agreed – should kick in

‘The European Commission between December and March outlined their backstop solution,’ Mrs May said.

‘So what we are proposing is an alternative backstop proposal but nobody wants this to be the solution that is achieved.

‘We want to achieve the right solution to our own border relationship with the European Union.

‘If it is necessary it will be in a very limited set of circumstances for a limited time but we are working on achieving that commitment to Northern Ireland through our overall relationship with the European Union.’

The PM was backed by Brexiteer Michael Gove, who claimed the backstop was there ‘just in case’.

He told a conference on unionism in London: ‘The whole point about the backstop is that it’s intended not to be implemented, but it’s there just in case.’

DUP leader Arlene Foster told the same conference that the backstop plan must be time limited.

Mrs Foster said: ‘There has to be a backstop on the backstop. It is vitally important that if that is to happen there is clarity in relation to the timing of it, for businesses in particular. 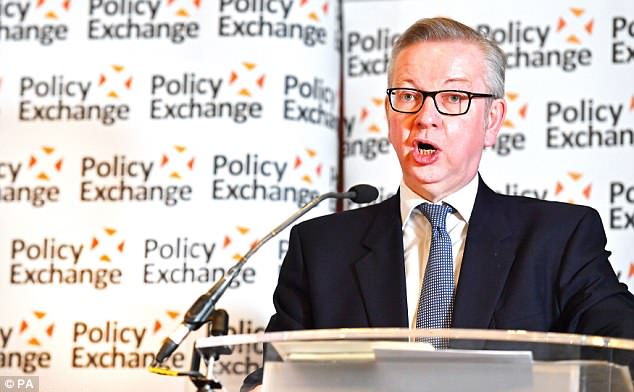 The PM was backed by Brexiteer Michael Gove (pictured today), who claimed the backstop was there ‘just in case’ 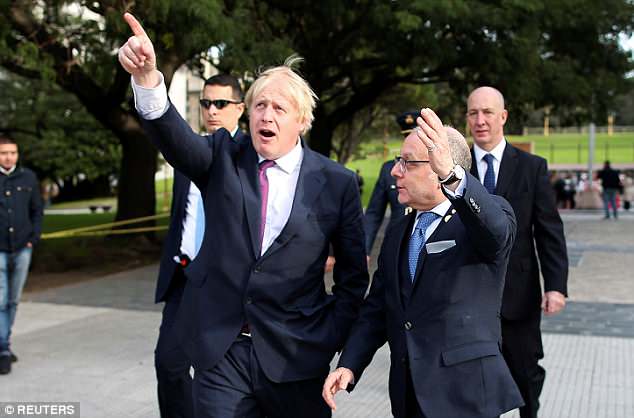 Foreign Secretary Boris Johnson, pictured left on a visit to Argentina yesterday, said he believed Brexiteers’ fears of a ‘betrayal’ were unfounded

‘We will not support a withdrawal agreement that creates a legal protocol with a new regulatory border down the Irish Sea.’

Foreign Secretary Boris Johnson, who is on a trip to south America, said he believed Brexiteers’ fears of a ‘betrayal’ were unfounded.

But in a warning shot over a ‘backstop’ plan that could keep Britain tied to the EU’s customs union beyond Brexit, Mr Johnson told reporters that ministers should not be planning to fail.

He said the Prime Minister must deliver a final deal that leaves Britain ‘unhindered’ to strike new trade deals across the world.

What are the options for the border between Northern Ireland and the Republic after Brexit?

Theresa May and the EU effectively fudged the Irish border issue in the Brexit divorce deal before Christmas.

But the commitments to leave the EU customs union, keep a soft border, and avoid divisions within the UK were always going to need reconciling at some stage. Currently 110million journeys take place across the border every year.

All sides in the negotiations insist they want to avoid a hard border between Northern Ireland and the Republic, but their ideas for how the issues should be solved are very different.

If they fail to strike a deal it could mean a hard border on the island – which could potentially put the Good Friday Agreement at risk.

The agreement – struck in 1998 after years of tense negotiations and a series of failed ceasefires – brought to an end decades of the Troubles.

More than 3,500 people died in the ‘low level war’ that saw British Army checkpoints manning the border between Northern Ireland and Ireland.

Both London and Dublin fear reinstalling a hard border – whether by checkpoints or other means – would raise tensions and provoke a renewal of extremism or even violence if people and goods were not able to freely cross.

The DUP – which opposed the Good Friday Agreement – is determined to maintain Northern Ireland inside the UK at all costs, while also insisting it wants an open border.

The PM has made clear her favoured outcome for Brexit is a deep free trade deal with the EU.

The UK side has set out two options for how the border could look.

One would see a highly streamlined customs arrangement, using a combination of technology and goodwill to minimise the checks on trade.

There would be no entry or exit declarations for goods at the border, while ‘advanced’ IT and trusted trader schemes would remove the need for vehicles to be stopped.

Boris Johnson has suggested that a slightly ‘harder’ border might be acceptable, as long as it was invisible and did not inhibit flow of people and goods.

However, critics say that cameras to read number plates would constitute physical infrastructure and be unacceptable.

The second option has been described as a customs partnership, which would see the UK collect tariffs on behalf of the EU – along with its own tariffs for goods heading into the wider British market.

However, this option has been causing deep disquiet among Brexiteers who regard it as experimental. They fear it could become indistinguishable from actual membership of the customs union, and might collapse.

Brussels has dismissed both options as ‘Narnia’ – insisting no-one has shown how they can work with the UK outside an EU customs union.

The divorce deal set out a ‘fallback’ option under which the UK would maintain ‘full alignment’ with enough rules of the customs union and single market to prevent a hard border and protect the Good Friday Agreement.

The inclusion of this clause, at the demand of Ireland, almost wrecked the deal until Mrs May added a commitment that there would also be full alignment between Northern Ireland and the rest of the UK.

But the EU has now translated this option into a legal text – and hardened it further to make clear Northern Ireland would be fully within the EU customs union.

Mrs May says no Prime Minister could ever agree to such terms, as they would undermine the constitutional integrity of the UK.

Neither side wants a hard border between Northern Ireland and the Republic.

But they appear to be locked in a cyclical dispute, with each adamant the other’s solutions are impossible to accept.

If there is no deal and the UK and EU reverts to basic World Trade Organisation (WTO) relationship, theoretically there would need to be physical border posts with customs checks on vehicles and goods.

That could prove catastrophic for the Good Friday Agreement, with fears terrorists would resurface and the cycle of violence escalate.

Many Brexiteers have suggested Britain could simply refuse to erect a hard border – and dare the EU to put up their own fences.