Dili: Prime Minister Scott Morrison has dismissed calls for the Australian government to drop the prosecution of whistleblowers Bernard Collaery and Witness K.

Mr Morrison was asked about the cases during a trip to East Timor where he finalised a long-awaited revenue-sharing agreement for the Greater Sunrise oil and gas fields. 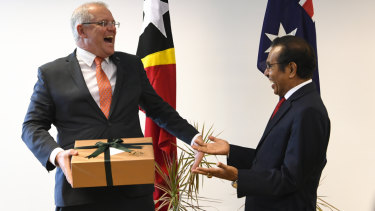 “That’s a domestic matter for Australia, it’s currently before the courts, it’s not a matter I want to comment on,” Mr Morrison said of the whistleblower prosecutions during a brief press conference in Dili.

Mr Collaery is his Canberra-based lawyer. The pair are regarded as heroes by many Timorese but they are being prosecuted for breaching Australia’s secrecy laws.

The Australian prime minister also rejected suggestions that Australia owed East Timor up to $5billion in oil and gas revenue which would have flowed to Timor under the new maritime agreement, but not under the previous 50-50 revenue split.

The phone bugging took place while Australia and East Timor were negotiating the maritime boundary and revenue sharing arrangements in 2004. When it was revealed, the agreement was dumped.

The new maritime deal came into force on Friday when the two nations’ leaders exchanged diplomatic notes, officially handing at least 70 per cent of revenue to East Timor from any future development of the Greater Sunrise gas field. They will receive 100 per cent of the revenue from existing fields.

“What was agreed over quite a period of time is that revenue sharing agreements commence from the time of exchange. That’s what we agreed, that’s what we will do,” Mr Morrison said.

The Australian prime minister added that Australia was East Timor’s principle development partner, having sent about $1.7 billion in aid to the country since independence and stressed the close ties between the two countries.

He highlighted the decision for Australia to fund East Timor’s first undersea fibre optic cable connection and a maritime security package, which will see Australia hand two Guardian class patrol boats to the country, as well as upgrade its naval base.

East Timor is this weekend celebrating the 20th anniversary of its historic vote for independence from Indonesia.