Theresa May has been accused of plotting to block Boris Johnson’s leadership ambitions by dragging out the contest to succeed her until the Tory Party conference in October.

Conservative chairman Brandon Lewis has told friends that if Mrs May survives the coming weeks, then Downing Street hopes to delay the final stages of the contest until the gathering in Manchester – in the hope it will deprive Mr Johnson of an immediate ‘Brexit bounce’ if Britain has left the EU.

Allies of Mrs May believe that a long contest would offer the best chance for the leadership to skip a generation, allowing a ‘dark horse’ candidate such as Tom Tugendhat, James Cleverly or Mark Harper to surge through the ranks. 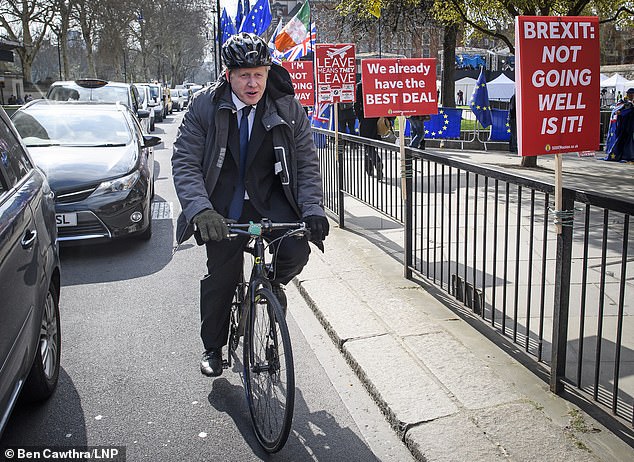 THE FAVOURITE: Boris Johnson has three times the support of his closest rival in leadership polling. But the darling of the party faithful has an uphill struggle convincing MPs to put him to the membership 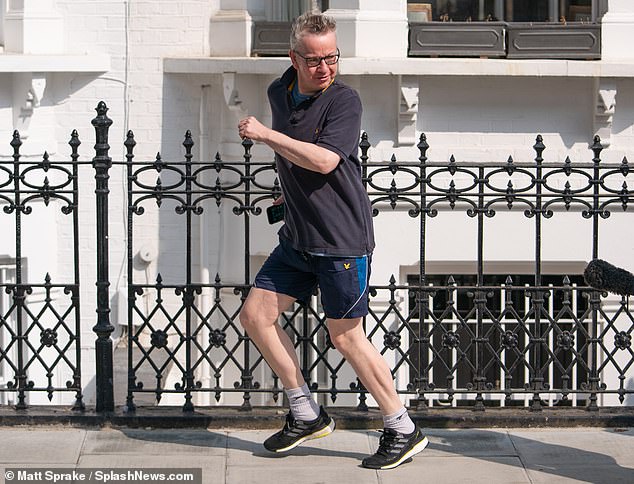 THE RUNNER: Michael Gove is running everyday, and not just to be Prime Minister. The Brexiteer believes he is the only one who can see off hardliners and unite remainers 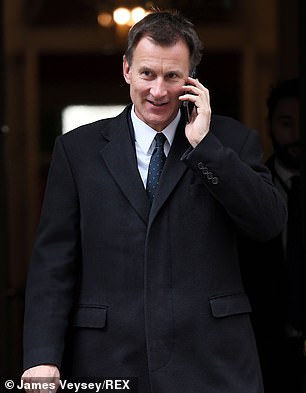 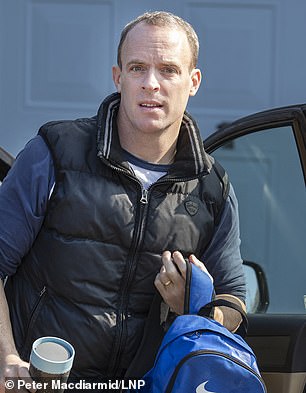 THERESA IN TROUSERS: Jeremy Hunt (left) is seen as a safe pair of hands but other MPs worry he is a bit too boring. He needs to move fast to shake the comparisons to Theresa May’s cautious steady-as-she-goes style. THE KARATE KID: Dominic Raab (right) is a Brexit purist but risks putting off more moderate MPs with his hardline Brexit stance. Clean cut with a black belt in Karate, his good looks hide a ruthless streak

Under the plan, the leadership contenders would parade their wares to the party faithful before a final vote by the Tory membership. It would also, they believe, allow Mrs May to be given a ‘dignified’ send-off by the party.

No 10 is furious about the leading role played by Mr Johnson and fellow Brexiteer Dominic Raab in opposing Mrs May’s deal – until they performed a U-turn in Friday’s vote.

A friend of Mr Lewis said: ‘By the time we reach the autumn, everyone will be heartily sick of hearing Boris and Raab banging on about Brexit, and will be in the mood for a new face – or at least a more acceptable one such as [Foreign Secretary] Jeremy Hunt.’

A Eurosceptic source said: ‘If they try this there will be a riot. Whoever takes over will need a decent run-up to the Brexit trade negotiations, to have the right team in place and devise a clear and coherent strategy’.

Who’s the real top dog in the Gove household?

Michael Gove’s wife Sarah Vine has lifted the lid on the real battle to be top dog – the one raging in their home.

Like the Tory Party leadership contest, this battle erupted last week after bichon frise Snowy got top billing by being pictured on their doorstep next to would-be Prime Minister Mr Gove. 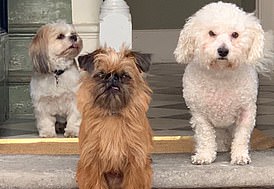 But as columnist Ms Vine revealed on Twitter, that only provoked the couple’s other two pets. ‘Muffin and Monkee say why is Snowy getting all the attention – look how damn cute we are,’ she tweeted.

It has been claimed that Mr Hunt is the frontrunner, with between 75 and 100 MPs ‘in the bag’, followed by Mr Gove with between 40 and 50 MPs.

However, both men privately dispute the figures and a poll in today’s Mail on Sunday by Deltapoll shows that former Foreign Secretary Mr Johnson is almost three times as popular as his nearest rival. Claims Mr Johnson has pledges of support from 80 Tory MPs have been dismissed by his camp as ‘well wide of the mark’.

It comes as the Cabinet contenders all unveiled their operations, with MPs starting to openly declare to each other who they are backing.

Mr Javid, who is said to be struggling to drum up significant levels of support, is being backed by Treasury Minister John Glen and former Minister Robert Halfon, a university friend. 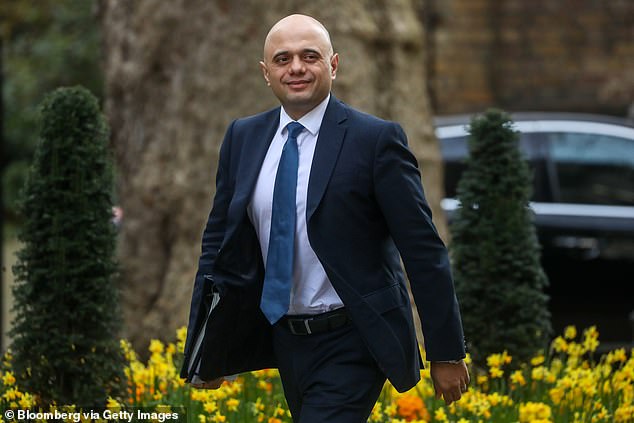 THE SAJ: The Home Secretary is said to be struggling getting support from colleagues after a choppy few months. He as an amazing backstory, but MPs fear he’s not ready 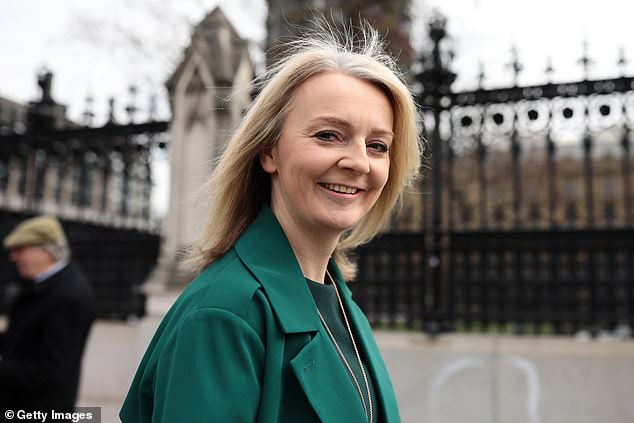 THE FREEDOM FIGHTER: Liz Truss wants to inject a bit red meat into the race with a clarion call for freedom against the nanny state. Picking up a lot of support with younger MPs of the right

Mr Hunt’s status as frontrunner last week came under sustained attack from rival camps which have nicknamed him and Mr Javid ‘The TiTs’ – short for Theresa in Trousers.

One Minister said: ‘We let the managers have a go last time and that went well. It’s time for someone with a bit of flair.’

Iain Duncan Smith’s arrival to see Theresa May at Chequers in his £25,000 Morgan 4/4 last week made headlines and turned the former Tory leader into an unlikely heart-throb. 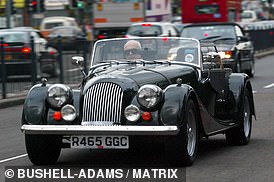 ‘He’s been getting fan mail from middle-aged women all week asking for a ride,’ a Commons source said.

It is not the first time IDS’s soft-top motor has hit the headlines – we first revealed his ‘Mr Toad’ look, below, back in 2003.

And another branded Mr Hunt ‘a Diet Coke version of Theresa May’.

Mr Hunt was by far the most active candidate last week, addressing MPs on Monday, followed by a wide-ranging midweek interview.

This weekend he tried to burnish his ‘statesman’ credentials with an article in the Washington Post newspaper in which he defended Britain’s presentation in the foreign media as a crime-ridden dystopia mired in political chaos.

He wrote: ‘Please put aside the doom-laden commentary and accept my assurance: we British are neither abandoning our neighbours nor retreating from the world.’ He was also seen wooing Amber Rudd at the expensive Corinthia Hotel off Whitehall, and The Mail on Sunday has learned he offered to make her his replacement as Foreign Secretary if he won a leadership contest.

However, Ms Rudd’s wafer-thin majority in Hastings would make extensive international travel a tough ask. Their breakfast plotting came as Ms Rudd, who many Remain-backing MPs want to run herself, emerged as a powerful ‘kingmaker’ figure.

Remainers and left-wing Tories will today launch a new ‘Compassionate Conservative’ group, to counter the Brexiteers. The 40-strong body will be headed by Ms Rudd as well as other ‘wets’ Damian Green, Nicky Morgan and Sir Nicholas Soames.

The group will seek to hold their own leadership hustings and rally behind a single candidate with the best hopes of defeating a Brexit hardliner from the European Research Group. Meanwhile, Mr Raab has been warned he will lose if he becomes the ‘poster boy for the ERG’. 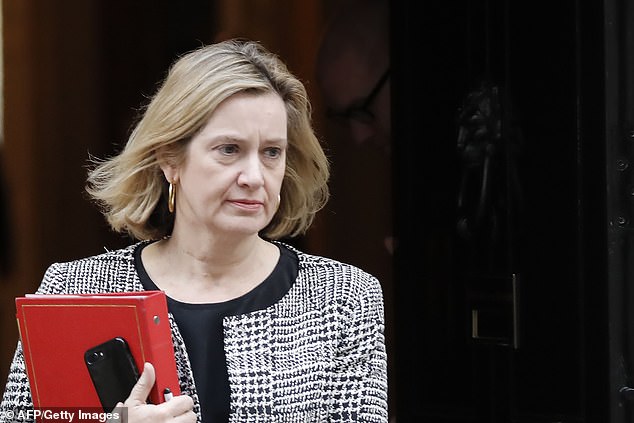 Remainers and left-wing Tories will today launch a new ‘Compassionate Conservative’ group, to counter the Brexiteers. The 40-strong body will be headed by Amber Rudd as well as other ‘wets’ Damian Green, Nicky Morgan and Sir Nicholas Soames

One MP said: ‘There is so much anger in the party at the behaviour of the nutters, that anyone who gets their backing en masse is f***ed.’

Allies of Mr Gove say his pitch to the MPs will be that he is the only Brexiteer who can unite the party – as it is highly likely a Remain-supporting candidate would be trounced in a vote of party members. Yet Mr Gove has proven with his support of the PM that he is not a hardliner.

A source said: ‘Michael is the only one who can beat the ERG out there in the country and stop us becoming a far-Right party.’ Mr Gove and Mr Javid were spotted have lunch together on Thursday in the House of Commons, with both camps dismissing reports that Mr Gove could endorse Mr Javid. A source in the Gove team said: ‘More like the other way round.’

Mr Javid would be a powerful endorsement for any frontrunner, but after a series of gaffes he is failing to attract the levels of support he might have hoped for. One MP said: ‘It’s always buddy this and buddy that, but I’m not sure he’s got what it what it takes to win people over.’

Last night luxury bookmakers Fitzdares told The Mail on Sunday that the firm was yet to receive a single penny in bets on favourite Michael Gove – and that all the flutters on Boris Johnson had come from females.

CEO Will Woodhams said: ‘Someone asked for odds on Winston Churchill’s grandson Sir Nick Soames, saying “only a Churchill can sort this mess out”. We gave him 250/1.’