Hardliners often attend annual rally, and their focus this year is on protecting ‘traditional values’ and shunning LGBT. 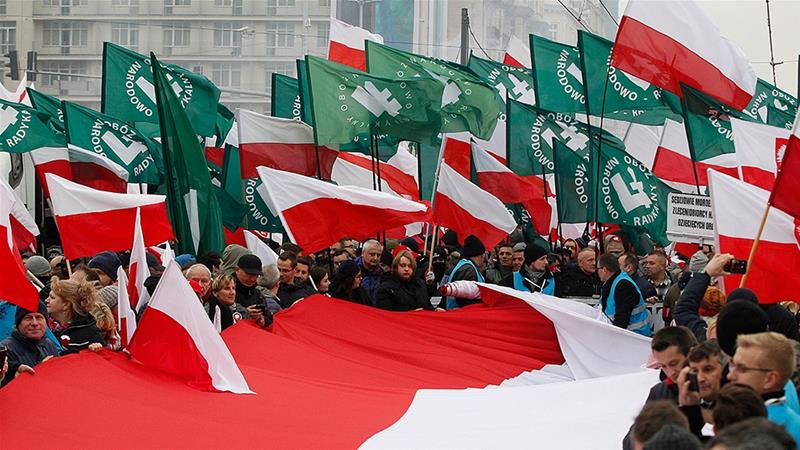 Warsaw, Poland – A raised fist holding a rosary in a gesture of resistance has become the symbol of this year’s Independence March – an annual nationalist event in Warsaw to celebrate Polish independence.

Participants on Monday are marching under the slogan: “Take care of the whole nation” – an excerpt from a Polish Catholic song calling on the Virgin Mary to protect the country.

The event is expected to begin at 2pm local time (13:00GMT), with the march kicking off an hour later.

In past years, the march has drawn thousands of nationalists from Poland and abroad and featured racist and anti-immigrant chants.

Nationalists who attended the march were focused on external “threats”, such as migrants and refugees, Islam, and Jews, as well as the internal “enemies”- liberal media, “communists” and “cultural Marxists”.

This year’s main threat, as perceived by hardliners, comes from those aiming to destroy a “Catholic Polish” identity and traditional family values – namely the LGBT community and activists promoting sexual education.

“The Independence March is a sad event, as it shows that Poland has a huge problem with national identity, especially the youth, which has been looking for answers in ethnonationalism,” said Rafal Pankowski, sociologist and political scientist at Collegium Civitas, and the head of the anti-racist Never Again Association.

“This event has also ceased to be only a day for Polish nationalism. It’s become a hub for far-right groups from around the world.”

In 2018, the centenary of Poland’s independence, about 200,000 participated in the event, which was attended by President Andrzej Duda.

“The participation of the president in the march last year was symbolic, as it was an extreme form of legitimisation of the movement. And it was a great mistake. The president showed that radical nationalists are legitimate hosts of a national celebration.

“This is one of the elements which contributed to what happened in the election – a legitimisation of radical groups, which for years were at the fringes of politics,” Pankowski said, referring to recent gains by the far right.

‘Ongoing fierce fight against our faith’

While a raised fist has long been used as a symbol of solidarity and resistance by oppressed groups around the world, in the latter half of the 20th century, white nationalists adopted it as a logo – the so-called Aryan or White Power fist.

The symbol in connection with the reference to the widespread cult of the Virgin Mary in Poland is indicative of yet another chapter in the country’s cultural war.

“There is an ongoing fierce fight against our faith and our sacred values,” wrote Robert Bakiewicz, the head of the Independence March Association, in an open letter published on the march’s website on October 22.

“It is happening through the profanation of the holy cross, a blasphemous portrayal of Virgin Mary, promotion of unnatural family model, demands of the right to live in a sin against the nature and the right to kill unborn children, and finally, there is an intensification of attacks against bishops calling these ideologies by their name and dubbing them as a plague.”

Tomasz Kalinowski, the association’s board member, added: “We want to invoke a patriotic, national slogan, but at the same time a Catholic and Christian one and, with the march, we want to highlight that national identity is inseparable from our Catholic faith.”

The march reflects an ongoing schism between nationalist conservatives and church groups and the liberal sections of Polish society.

This conflict has intensified as LGBT marches have been violently attacked by far-right demonstrators, who falsely accuse members of the sexual minority of being perverts or even paedophiles.

“Above all, the Independence March is a political and not a religious event,” said Tomasz Szczepanski, head of the neo-pagan, far-right Niklot association. “Secondly, if we are to politically interpret it [the slogan], it refers to the idea of a Pole-Catholic and the church as a national institution. This could have been defendable in the 19th century, but not today.”

During the march, nationalist activists are planning to gather signatures to support a bill against property restitution.

The bill is designed to target the heirless properties that had belonged to Jews and were appropriated by the Nazis during the second world war.

While, by law, such property becomes a state asset, nationalists fear that the Jewish restitution organisations, with support from the US government, could try to reclaim the lost properties.

In the October 2019 parliamentary elections, Konfederacja, a party of hybrid of hardline free-market groups and far-right nationalists close to the Independence March circles, received 6.8 percent of the vote – thereby bringing their representatives to parliament for the first time.

But the far-right Independence March is not the only gathering the city hall has registered on November 11.

Other groups, including left-wing Antifa, will also hold demonstrations, although far fewer participants are expected than the nationalist gathering.