Hiding on thin ice: Polar bear is hard to spot as it leaps between melting sheets of ice in the Arctic

A polar bear shows its camouflage skills as it prowls among the ice sheets almost impossible to spot in these stunning aerial pictures.

The beautiful photos taken in the Nunavut territory, the northernmost in Canada and which includes most of the country’s Arctic islands, show the animals’ amazing abilities to hide as they cross the pieces of ice.

But the images, taken in the north of Canada this summer, show how the polar bears’ habitat is coming under threat with ice shrinking and sea levels rising.

Shot by wildlife photographer Florian Ledoux, 28, the pictures show the animals leaping from one piece of thin and breaking ice to another as the area becomes ever more flooded by water. 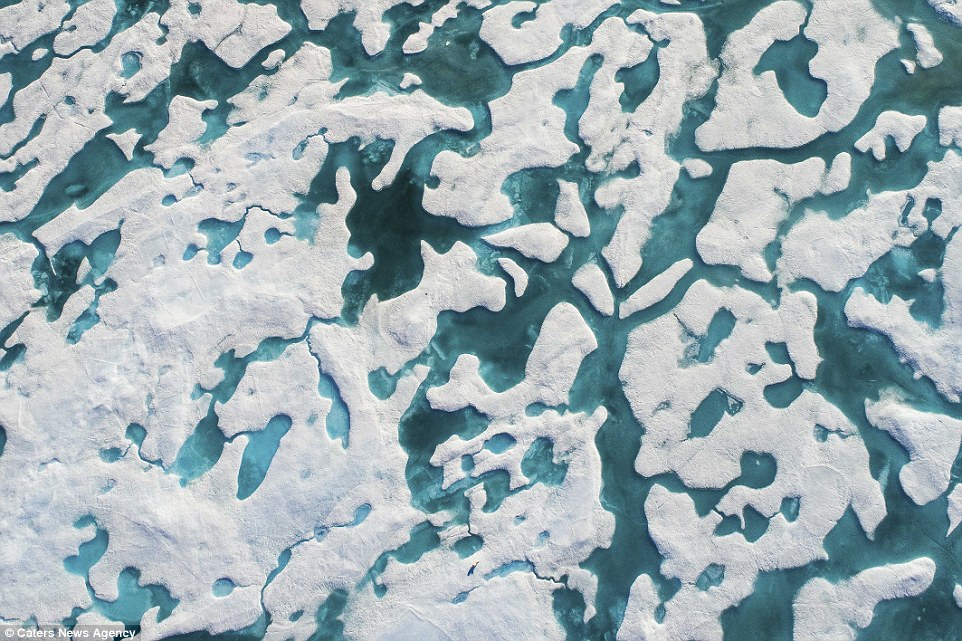 Can you spot the polar bear? An animal lurks among the ice in this aerial image taken in Canada (scroll down for answer) 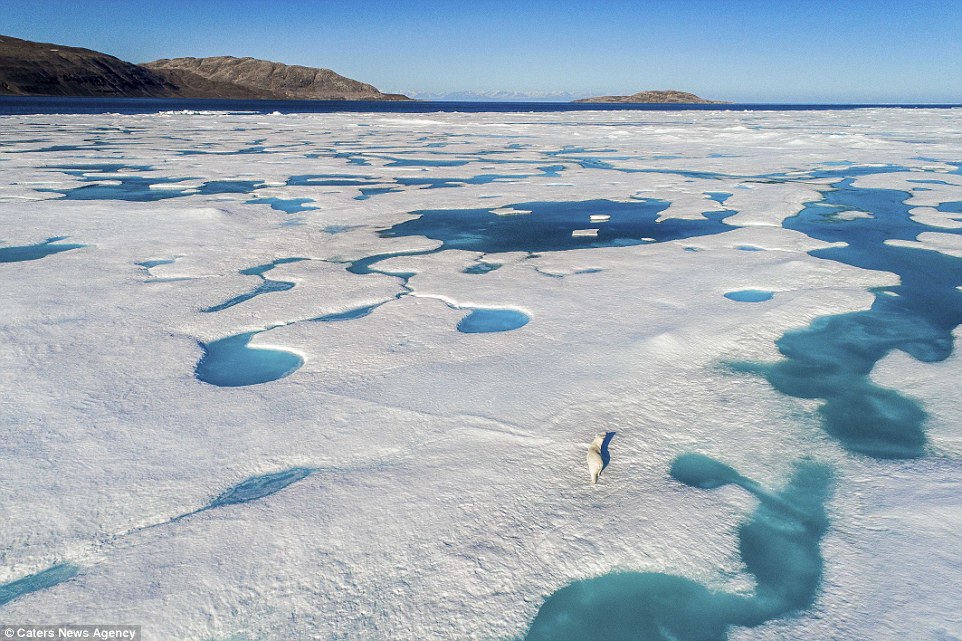 Stunning: The graceful polar bear walks among the sheets of ice in the far north of Canada in one of the beautiful pictures 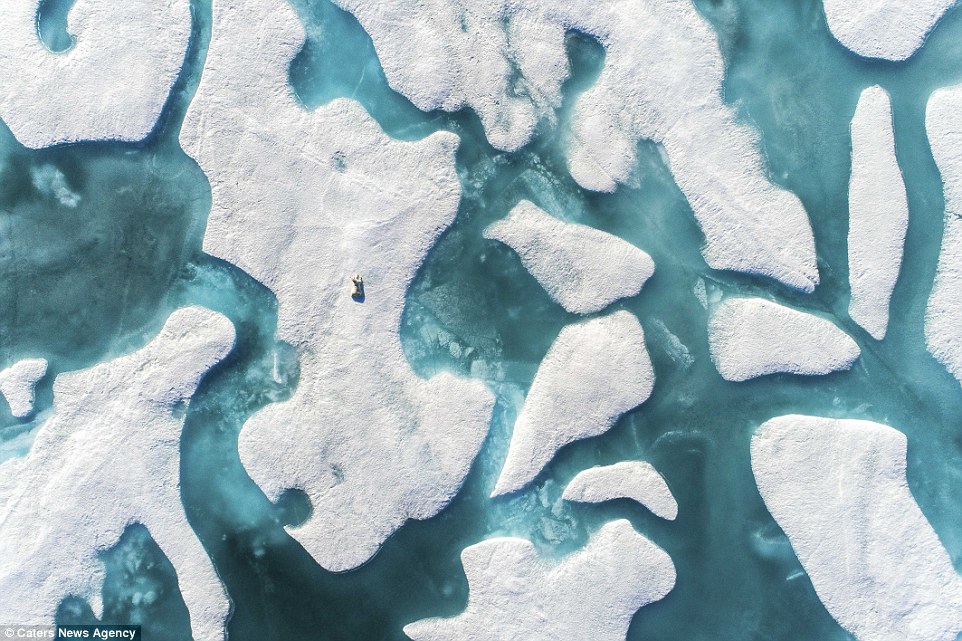 View from the top: This shot shows the diminishing ice sanctuaries for the polar bear as their habitats come under threat 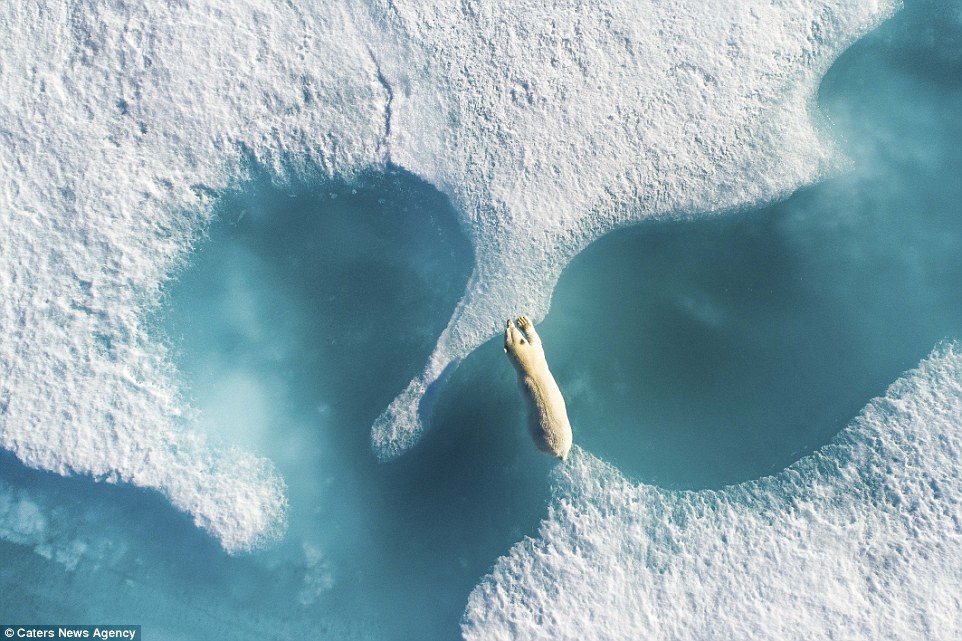 Leap of faith: A polar bear crosses from one sheet of ice to another as the animals’ habitats come under threat in the summer

He said he observed the creatures on the rapidly disappearing ice sanctuaries and saw open ice-free fjords with the last ice havens all but gone.

Polar bears rely upon these pieces of ice for hunting but the International Union for the Conservation of Nature has warned their population will drop if the loss of sea-ice continues due to climate change.

Florian said: ‘The idea to see polar bears in the wild was in my head since the day I went to the Arctic when I was 11 years old. I did not know I would capture these unique images but I wanted to photograph them from above.

‘For me, there is no better feeling than being close to those magnificent mammals, sharing a space with them.

‘I will always remember that moment I saw my first polar bear, I cried during the three hours we stayed close to them.

‘But now, it is time to act to protect these animals and I want my photos to help in creating more Marine Conservation Areas.’ 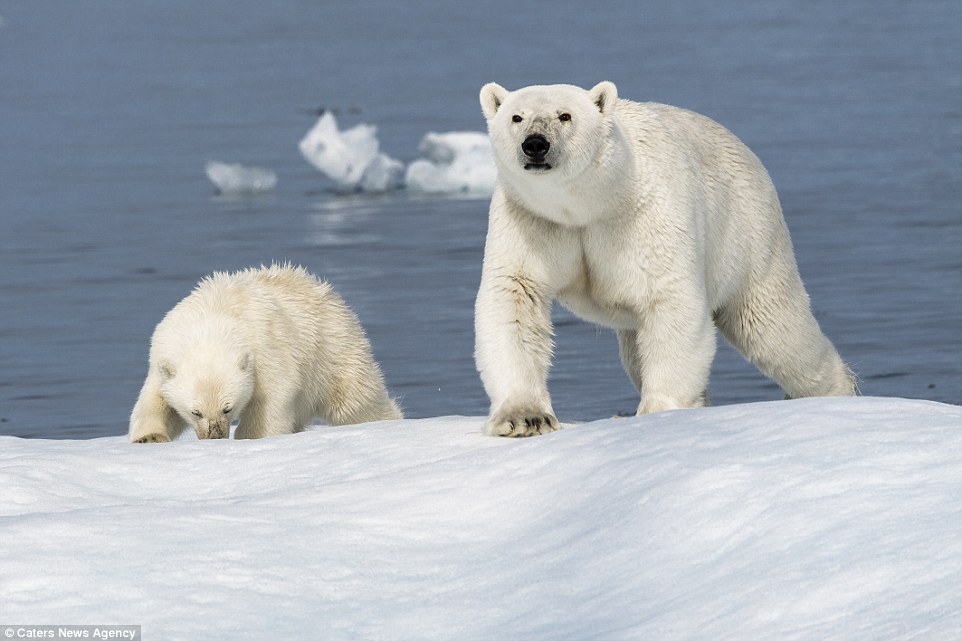 On land: A close-up of the polar bears who are able to camouflage on the ice but must adapt to shrinking territory in Canada 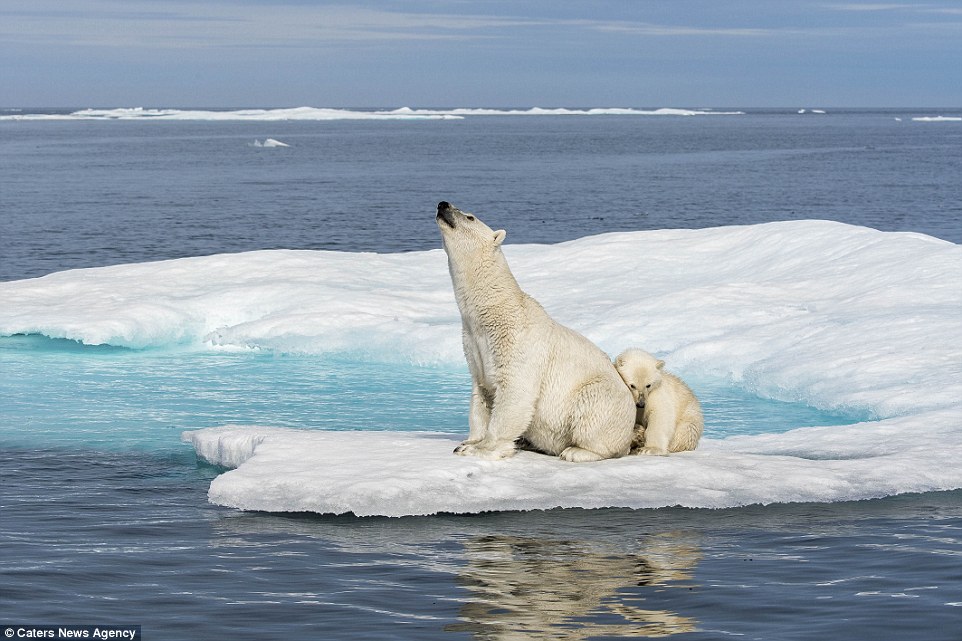 Island sanctuary: A ground-level view of polar bears in the north of Canada where a small block of ice is surrounded by water 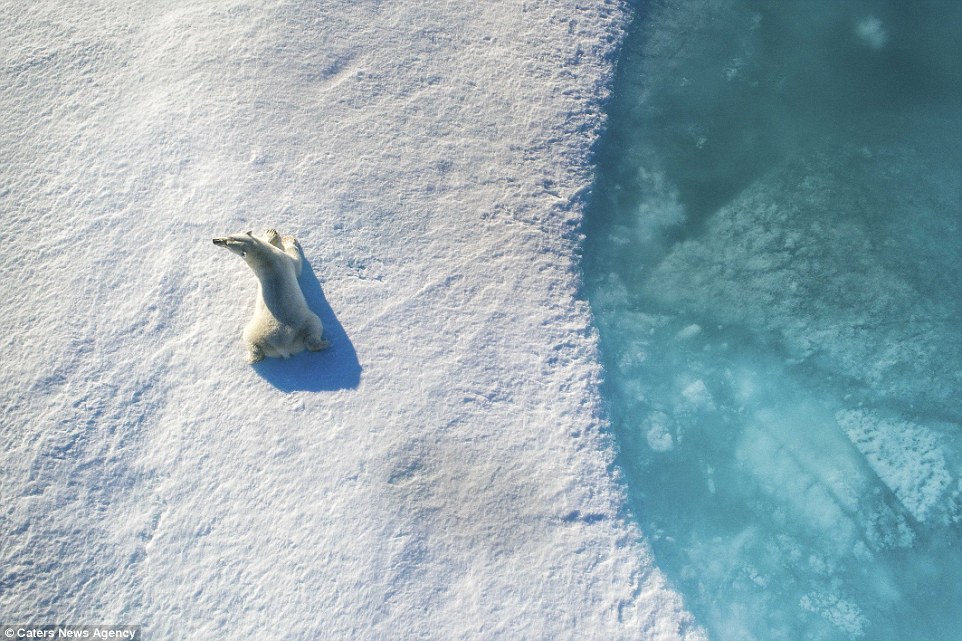 By the sea: The polar bear lies on the edge of the ice in one of the shots taken by wildlife photographer Florian Ledoux 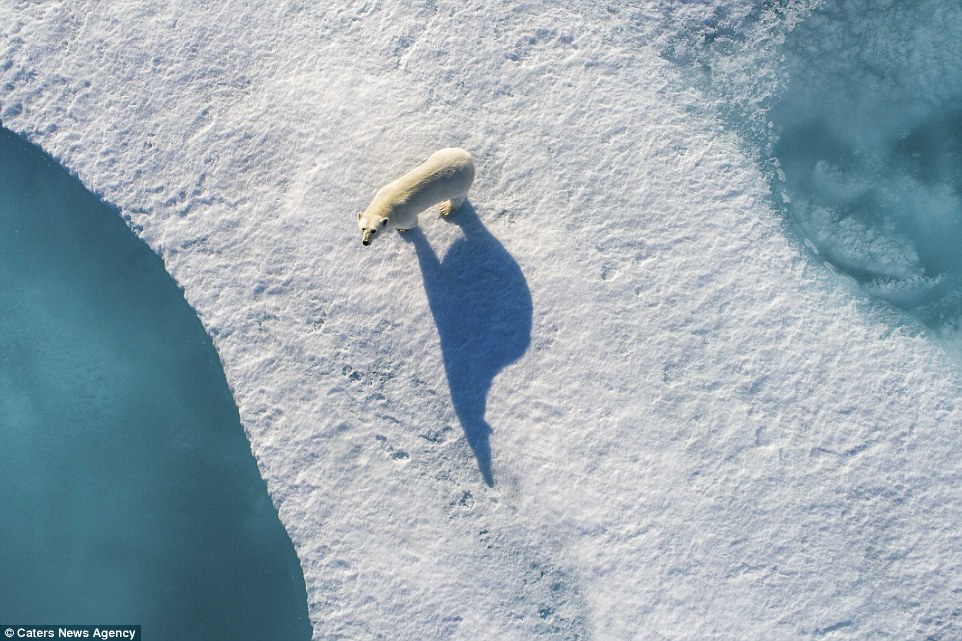 Graceful: The polar bear casts a long shadow in the summer sunlight as it walks over the remaining sheets of ice Sink or swim: A polar bear crosses thin and breaking pieces of ice which is melting away in the hot summers 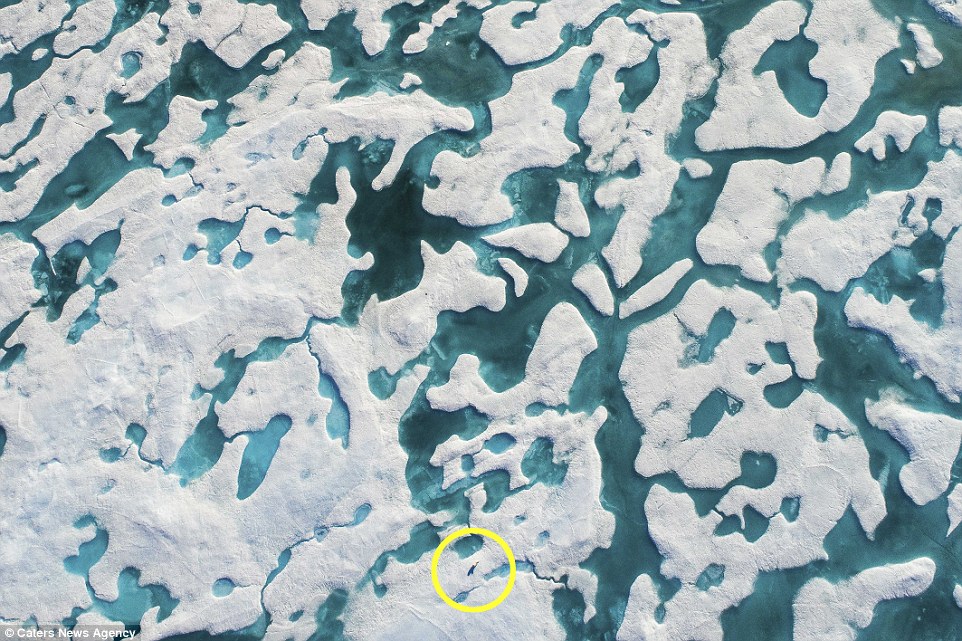 The answer: The polar bear is prowling at the bottom of the picture almost invisible among the remaining portions of ice