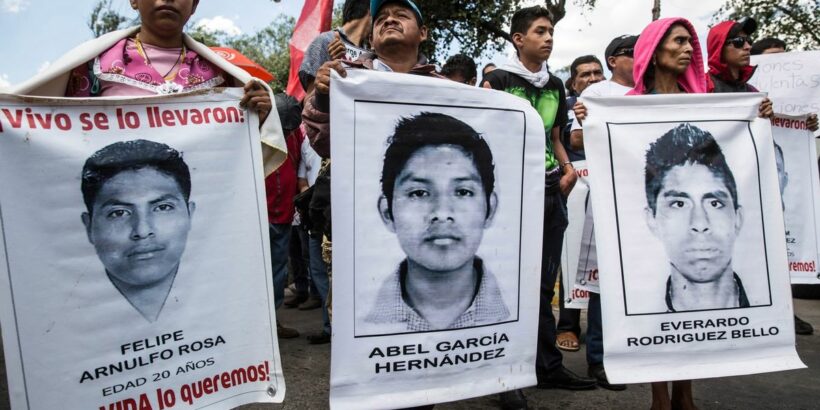 New chilling messages indicate that police and the Mexican cartel worked together to capture, torture and murder at least 38 out of the 43 students that went missing in September of 2014.

The mystery surrounding the disappearance of 43 male students from the Ayotzinapa Rural Teachers' College has never been revealed until now.

Text messages between a crime boss and a deputy police chief has revealed horrible details about the fate of at least 38 of the 43 students.

Several buses were commandeered by the students in order to drive to a Mexico City protest.

But it is now clear the vehicles were part of a drug-running operation that were due to carry a a large cargo of heroin across the U.S border, which was accidentally stolen by the students.

Local leader of the cartels at the time, Gildardo López Astudillo and Francisco Salgado Valladres, deputy chief of the municipal police force in the town, traded text messages on the day.

September 26, 2014, Salgado texted López explaining that he had arrested two groups of students for taking the busses – writing that 21 of them were being held on the bus.

López then responded with a trading point on a rural road stating he "had beds to terrorise" the students in. This is believed to have been referencing the cartel chief's plans to bury and torture them, The Daily Beast reported.

Salgado next wrote that 17 more students were being kept "in the cave," to which the cartel chief said he "wants them all."

The police officer then reportedly told the cartel boss to make sure he brings enough men to handle the job.

Devastatingly, the bodies of the students have never been found, aside from a small number of bone fragments.

Speaking to The Daily Beast, Mike Vigil, the DEA’s former chief of international operations, said: “The story of the massacre of the students in Ayotzinapa is like a Hollywood movie, but the events are real.

"They involve collusion between the police, army, organized crime, and a massive coverup by the Mexican government.”