Nearly 200 anti-lockdown and Million Mask March protestors were arrested for breaching coronavirus legislation after some clashed with police in London over the new Covid-19 restrictions.

Officers were called to Trafalgar Square yesterday evening during a protest against the second national lockdown as well as the law around wearing masks.

Jeremy Corbyn’s brother Piers, 73, stood among the crowds with a megaphone despite being fined £10,000 for his part in a previous rally.

Hundreds of demonstrators marched through the streets of the capital chanting ‘freedom’ and ‘no more lockdown’.

All 190 arrested suspects were taken into custody for breaching the new coronavirus legislation that was first passed in September when huge fines were introduced as punishment for large-scale breaches.

One of those arrested is being investigated for a £10,000 fine, while the other 189 face a fixed penalty notice, police said. 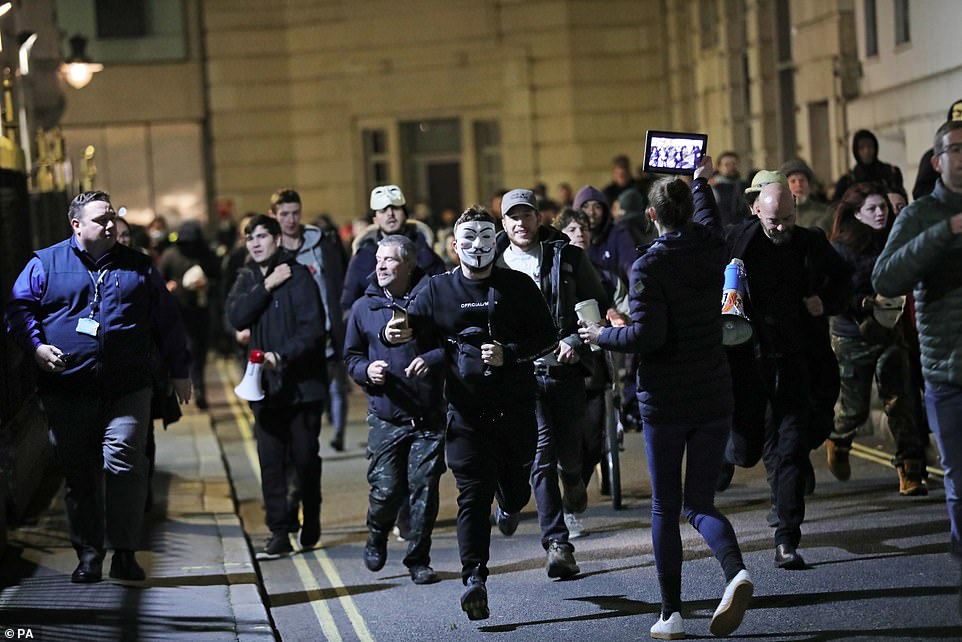 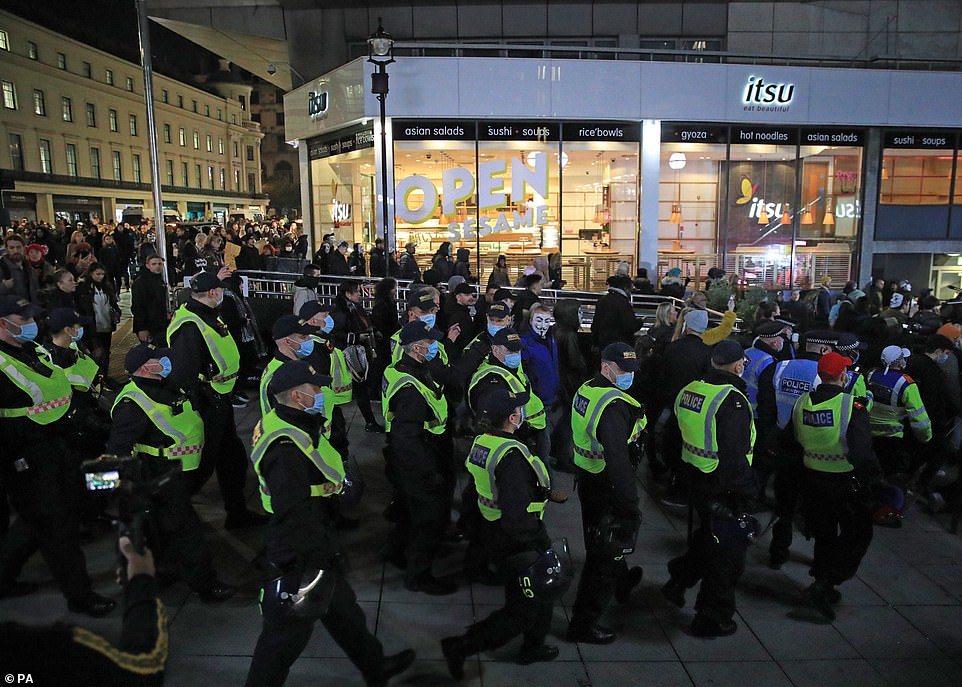 Police vans lined the Strand as officers from both the City of London and Metropolitan Police forces urged protesters to go home with one officer shouting at a group: ‘You are breaking the law’ 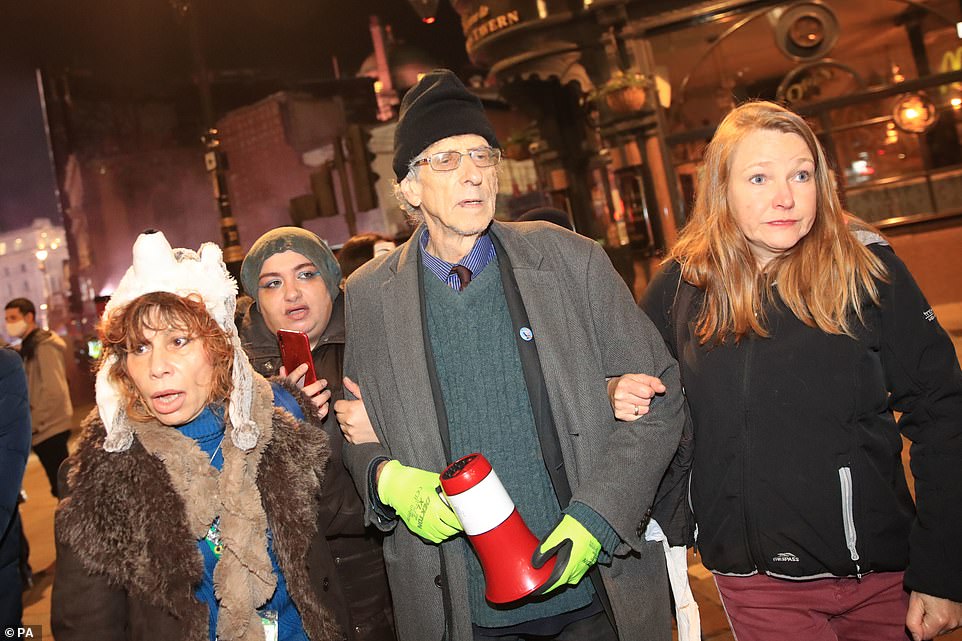 Jeremy Corbyn’s brother Piers, 73, stood among the crowds with a megaphone despite being fined £10,000 for his part in a previous rally 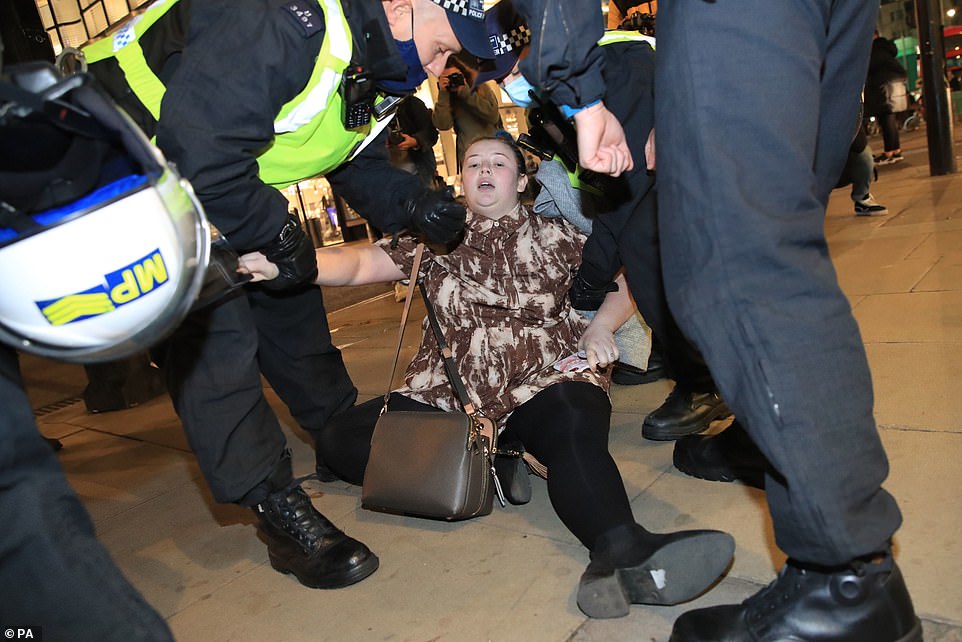 Police detain a protester during the Million Mask March anti-establishment protest at Trafalgar Square in London, on the first day of a four week national lockdown for England 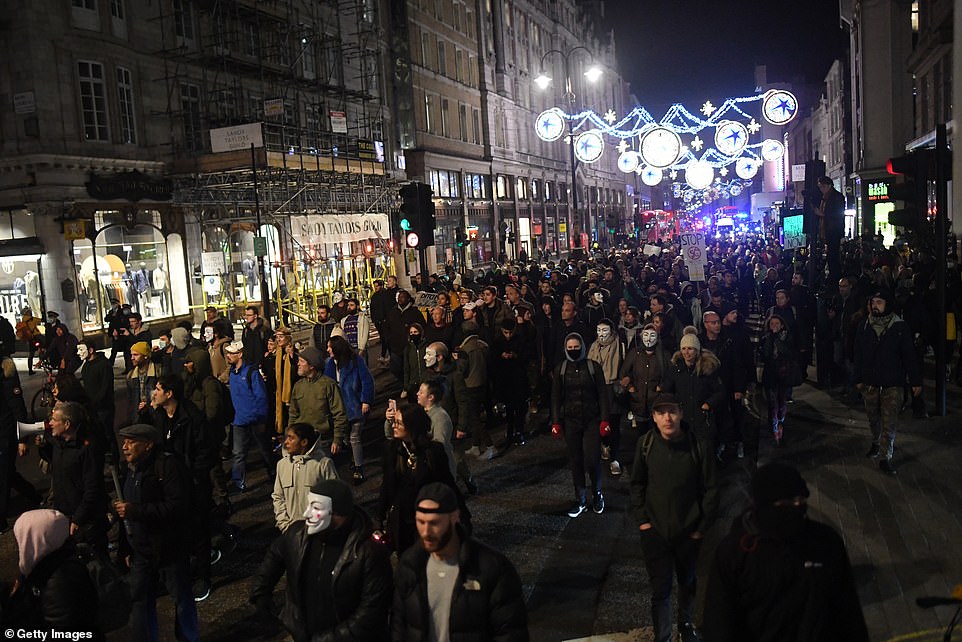 Officers were called to Trafalgar Square, London, yesterday evening during a protest against the second national lockdown and the law around wearing masks

Matt Twist, deputy assistant commissioner, said the arrests were made because protesters deliberately ignored their instructions.

He said: ‘There can be no excuse for breaching the regulations which have been designed to save lives and keep people safe.

‘Those who came out to protest last night put their health at risk and frustratingly, they put the health of London and our officers at risk, this is clearly unacceptable.

‘A significant policing plan was in place last night and officers moved swiftly to speak with those who were intending to gather.

‘Officers explained very clearly the regulations and unfortunately a number of people took deliberate steps to ignore the direction. 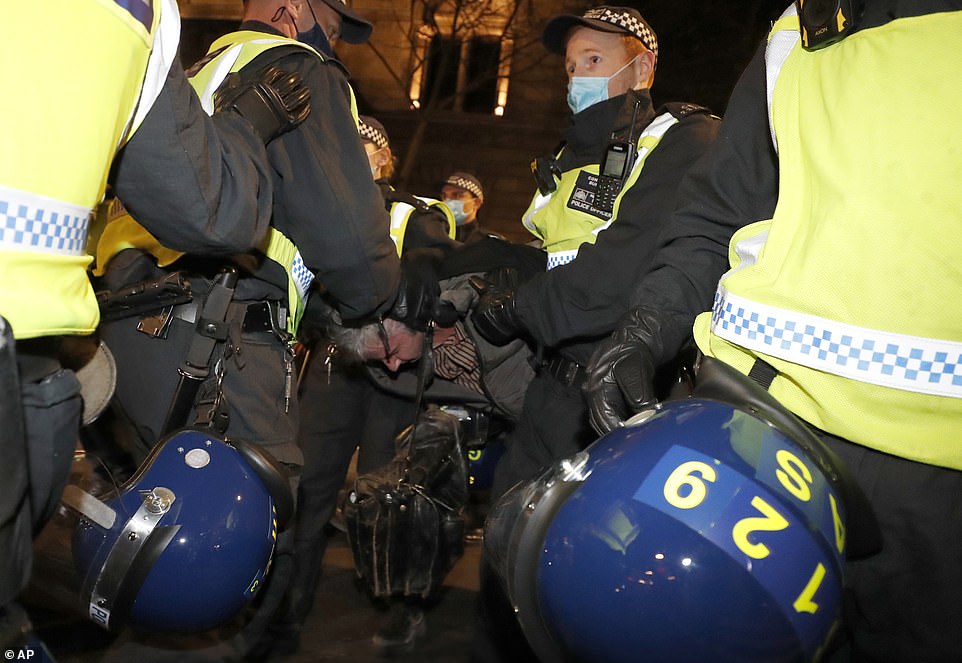 Metropolitan Police officers, who were wearing face masks, carried one man away from the crowds after detaining him earlier yesterday evening 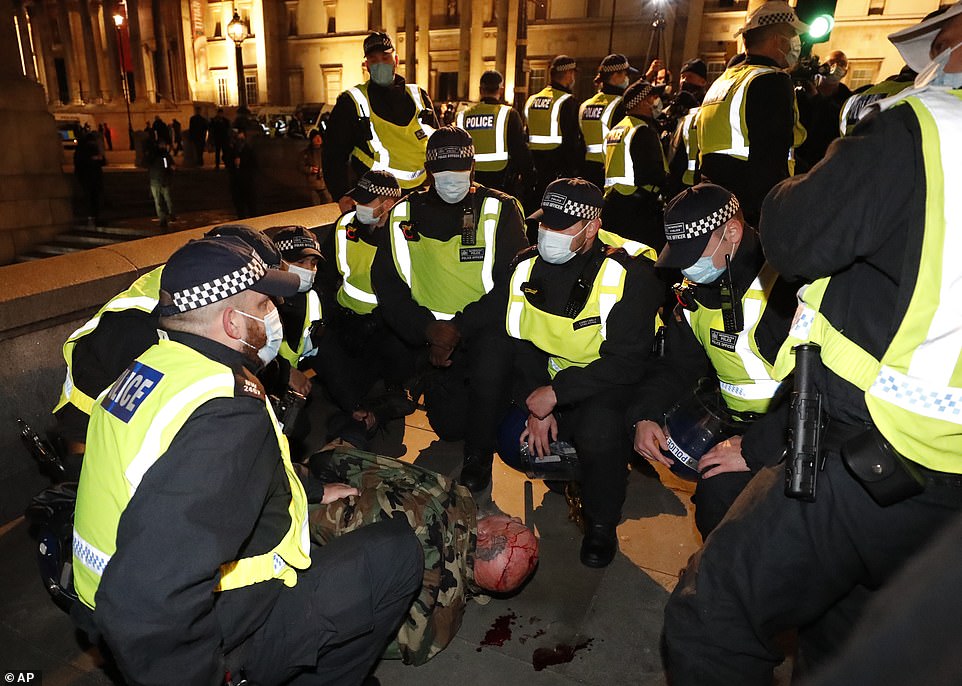 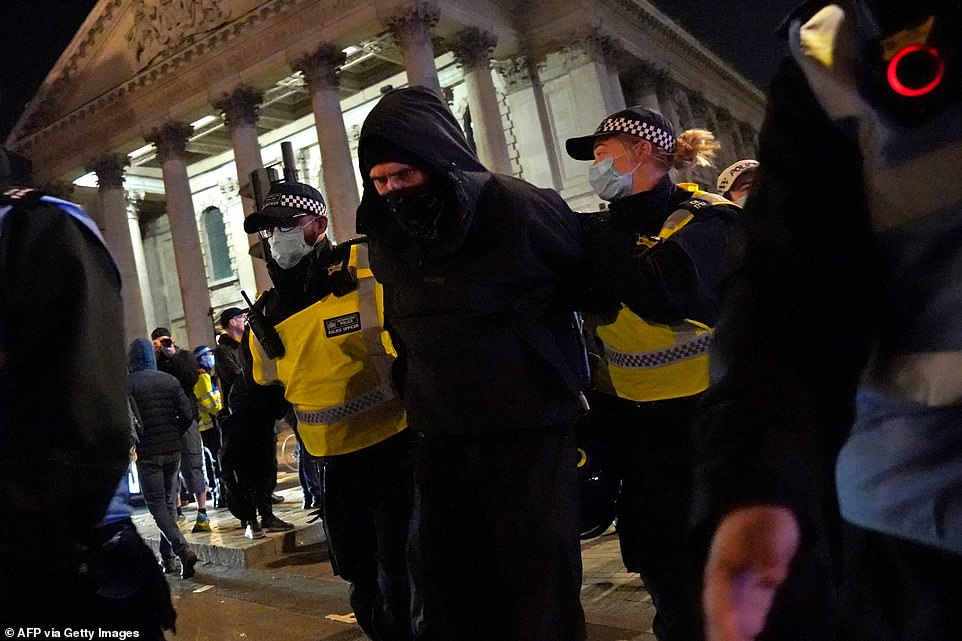 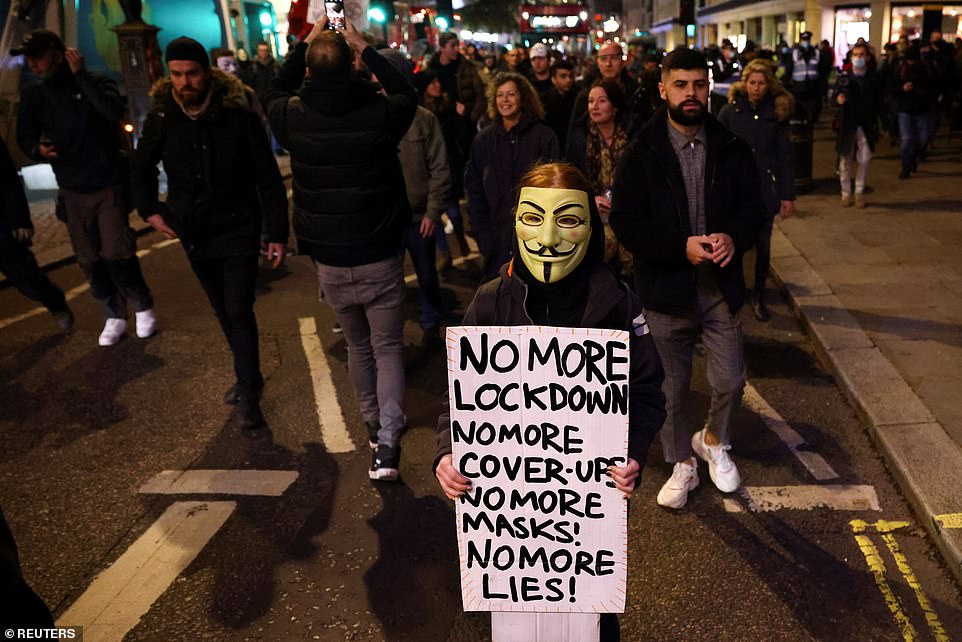 Many of the demonstrators carried placards – one of which read: ‘No more lockdown, no more cover ups, no more masks, no more lies!’ 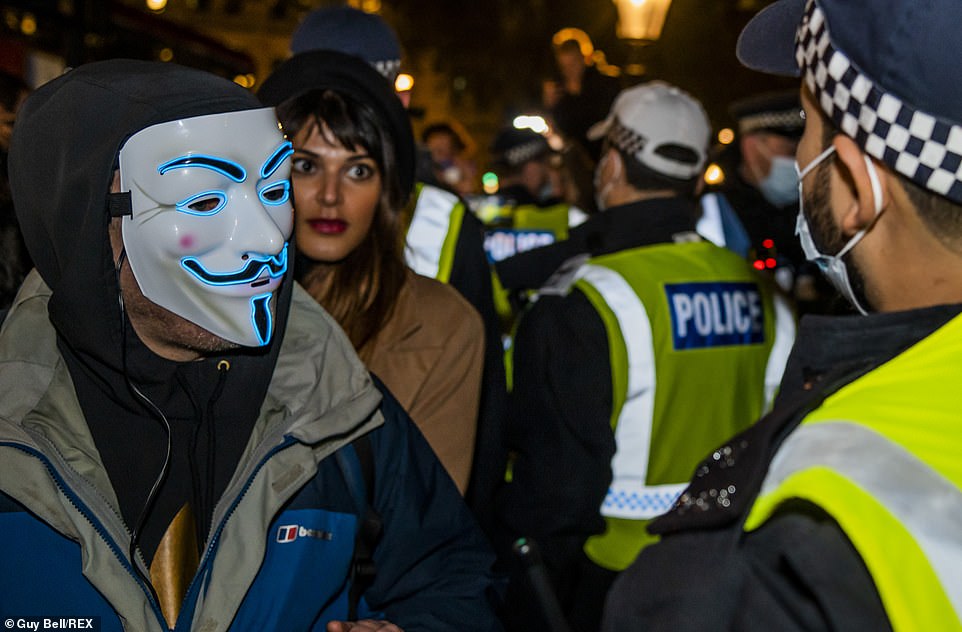 Hundreds of protestors gathered in Trafalgar Square, London, yesterday as police officers from the capital attempted to move them on

‘Because of this, firm action was taken and a large number of arrests were made. We will not tolerate these dangerous breaches of the regulations.

‘190 is a significant amount of arrests and we have a post-incident plan in place to ensure these investigations are progressed and the suspects are brought to justice.’

Four protesters, one of whom was wearing a Guy Fawkes mask, were arrested by police officers near the gates of Charing Cross Station.

Soon after 7pm, a smaller demonstration gathered near Primark on Oxford Street, where a number of protesters were grouped in by two lines of officers.

Those clustered in by police chanted ‘stand up’ while officers encouraged protesters gathered nearby to go home. 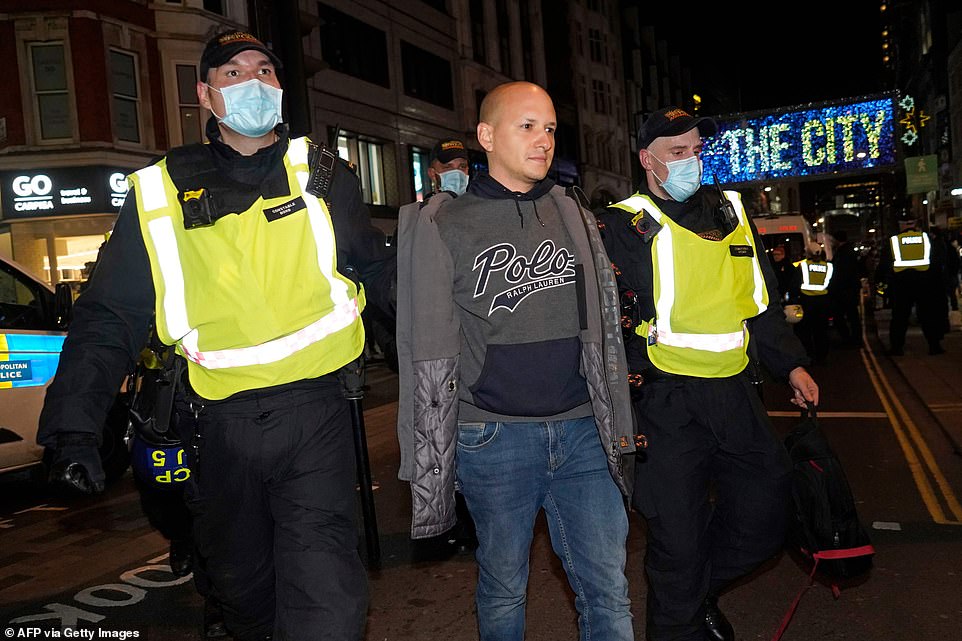 One anti-establishment demonstrator was escorted away by police officers on Oxford Street, London, yesterday evening during the anti-lockdown and Million Mask March 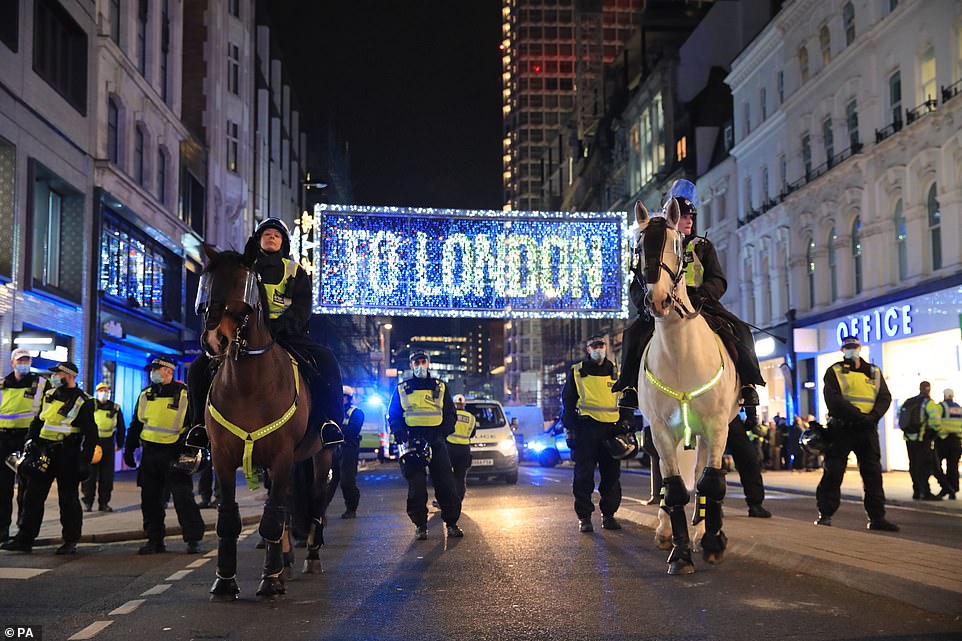 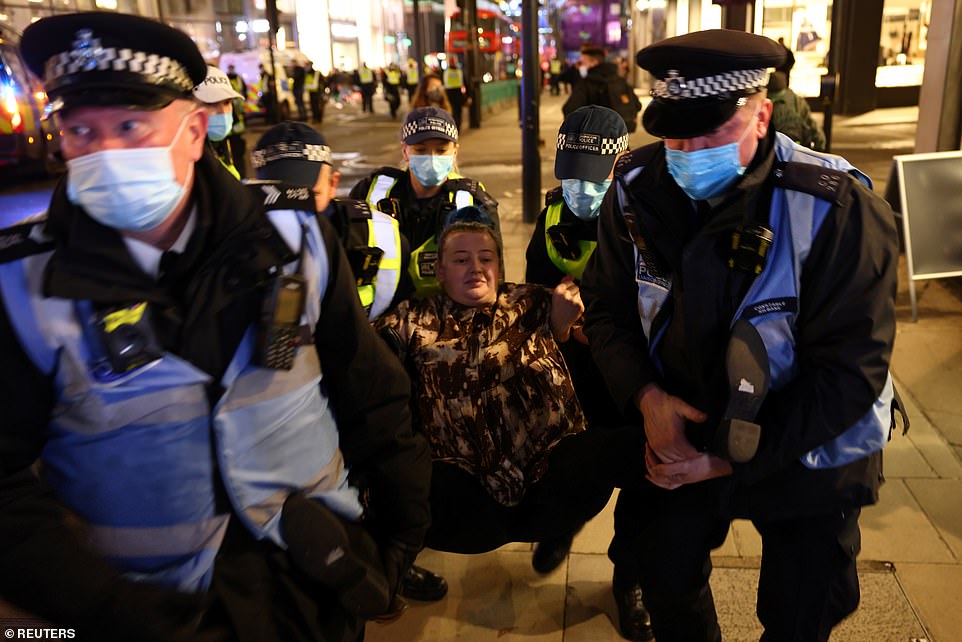 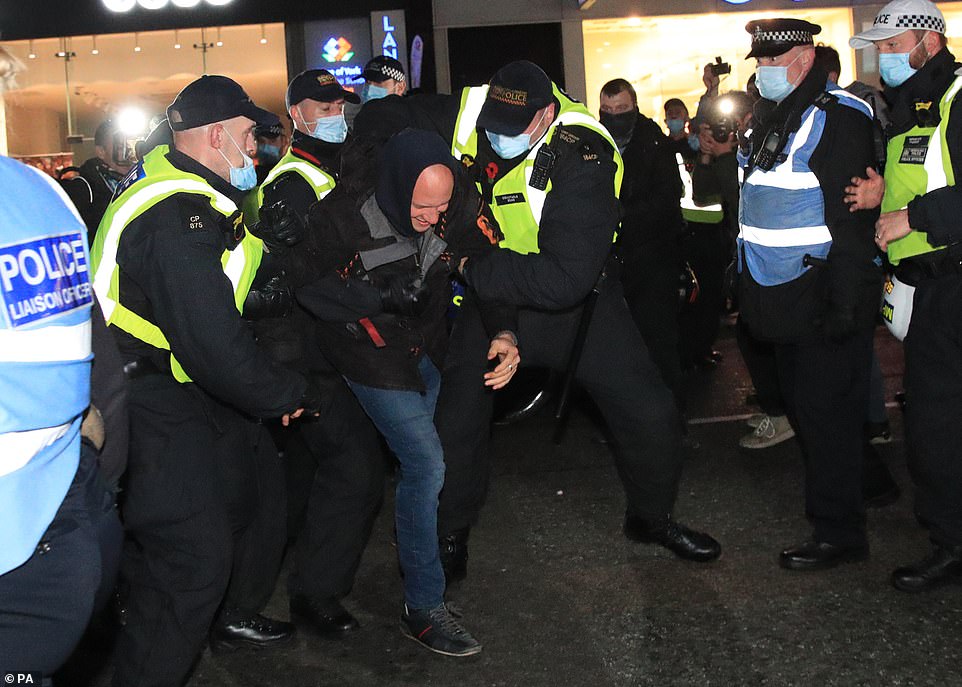 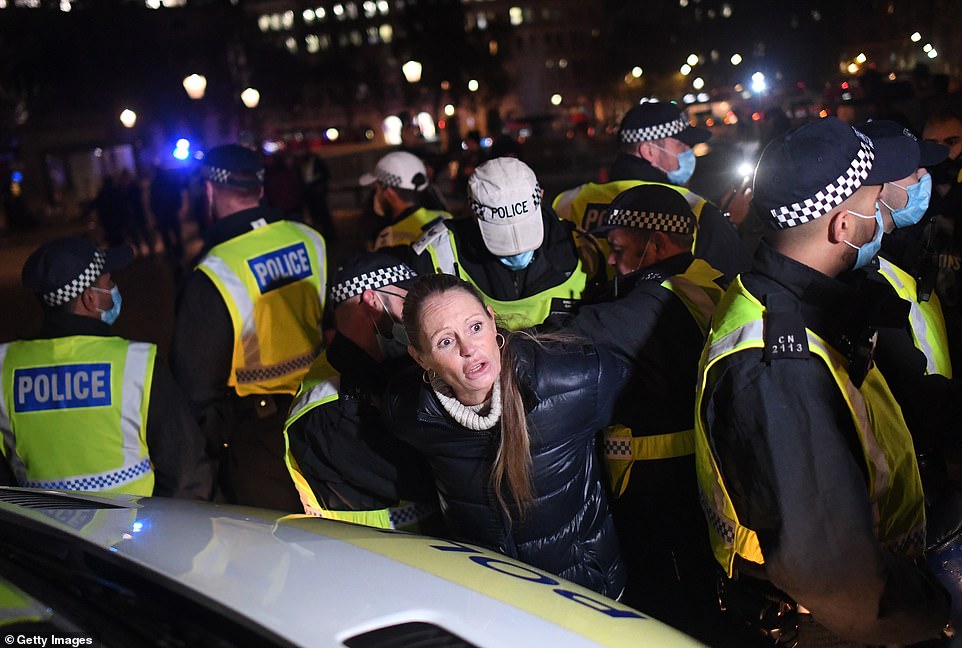 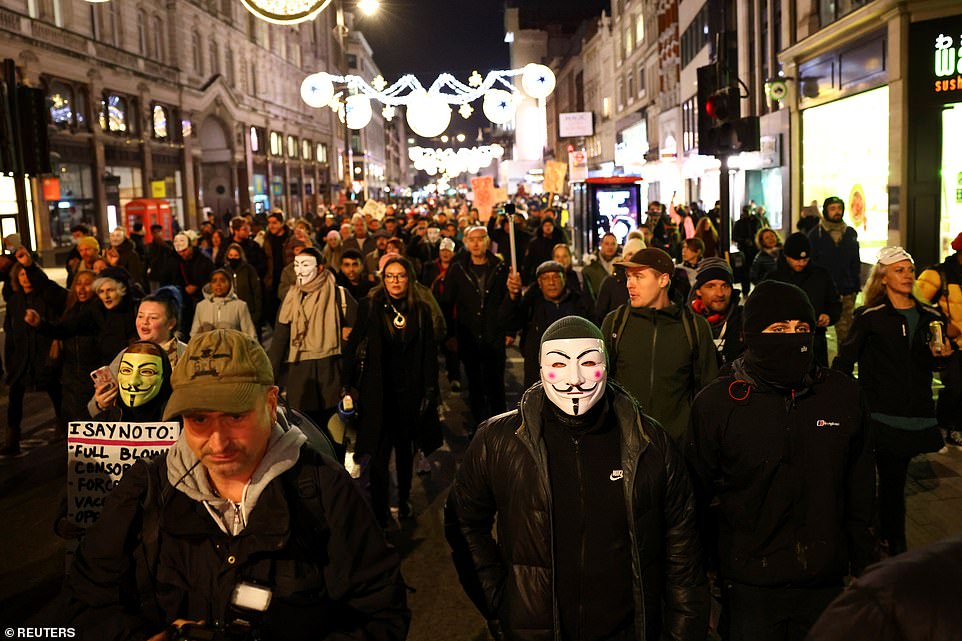 ‘You need to leave, you are breaching coronavirus restrictions,’ one officer told demonstrators.

Police vans lined the Strand as both the City of London and Metropolitan Police forces urged protesters to go home with one officer shouting at a group: ‘You are breaking the law.’

Many of the demonstrators carried placards – one of which read: ‘No more lockdown, no more cover ups, no more masks, no more lies!’

Other attendees filmed officers while shouting ‘freedom’ and ‘take our country back’.

The Metropolitan Police condemned the group’s action in a tweet last night that read: ‘A small group have gathered in #TrafalgarSquare to protest tonight.

‘Officers are talking with those there and directing them to go home. If they do not, officers will take enforcement action.

‘We remain in a national health crisis and new heightened restrictions have been brought in to limit the spread of Coronavirus.

‘This action is being taken to keep everyone safe. A policing plan will remain in place throughout the night.’ 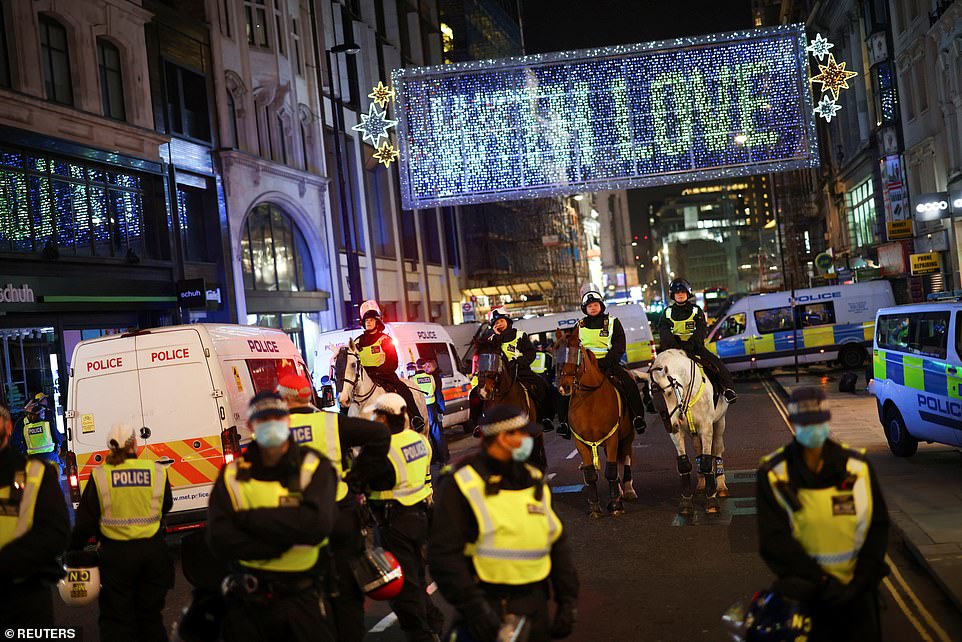 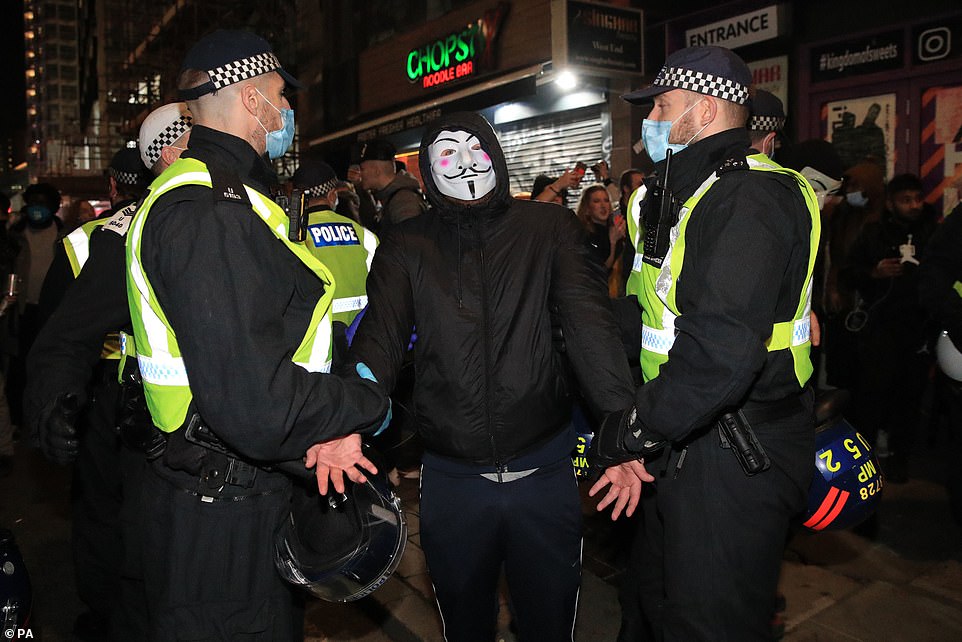 Several demonstrators, one of whom was wearing a Guy Fawkes mask, were arrested by police officers near the gates of Charing Cross Station 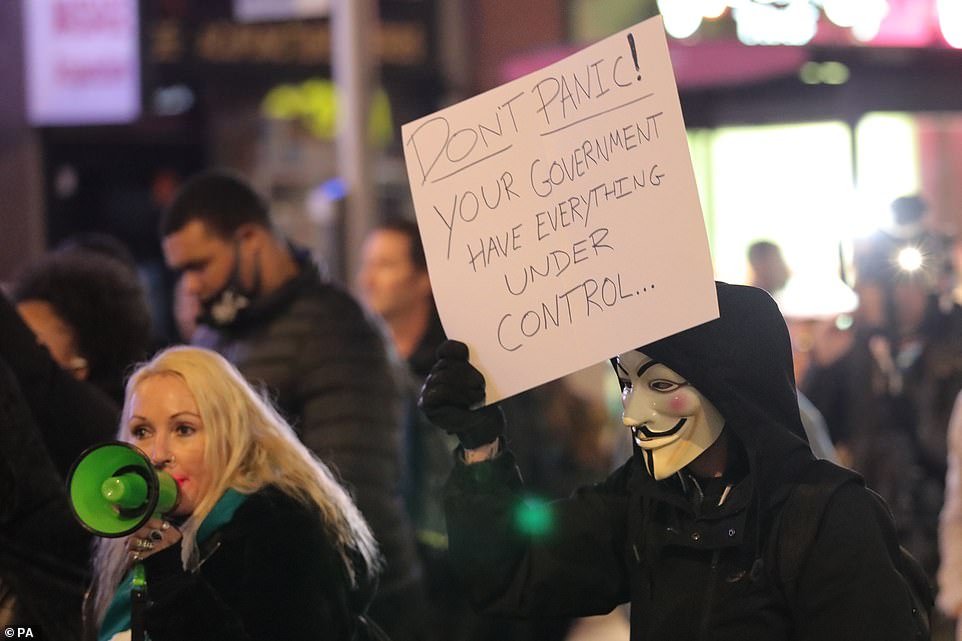 One of the protestors chanted through a megaphone as another, wearing a Guy Fawkes mask, carried a  placard that read: ‘Don’t panic, your government have everything under control’ 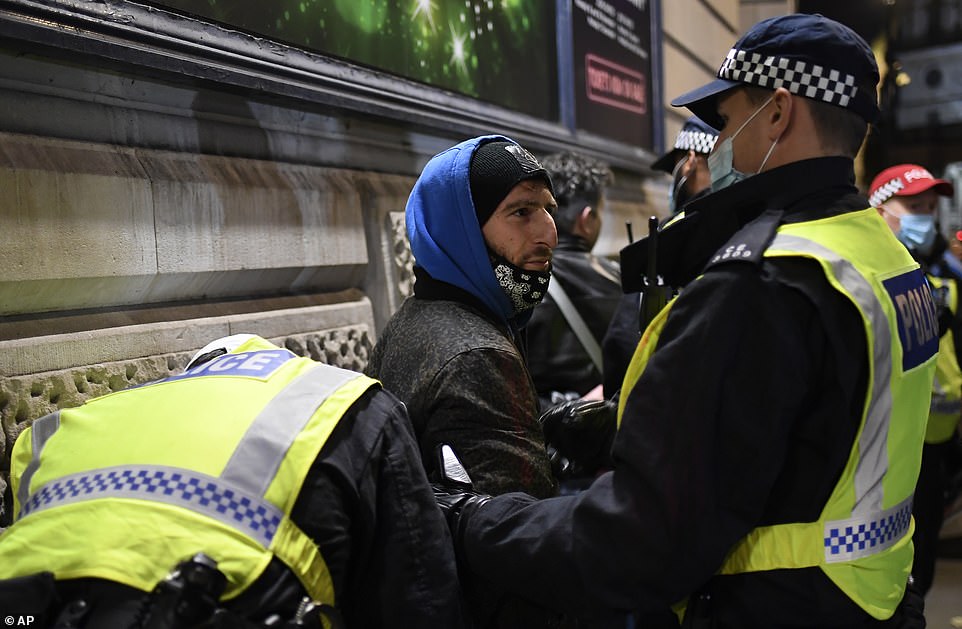 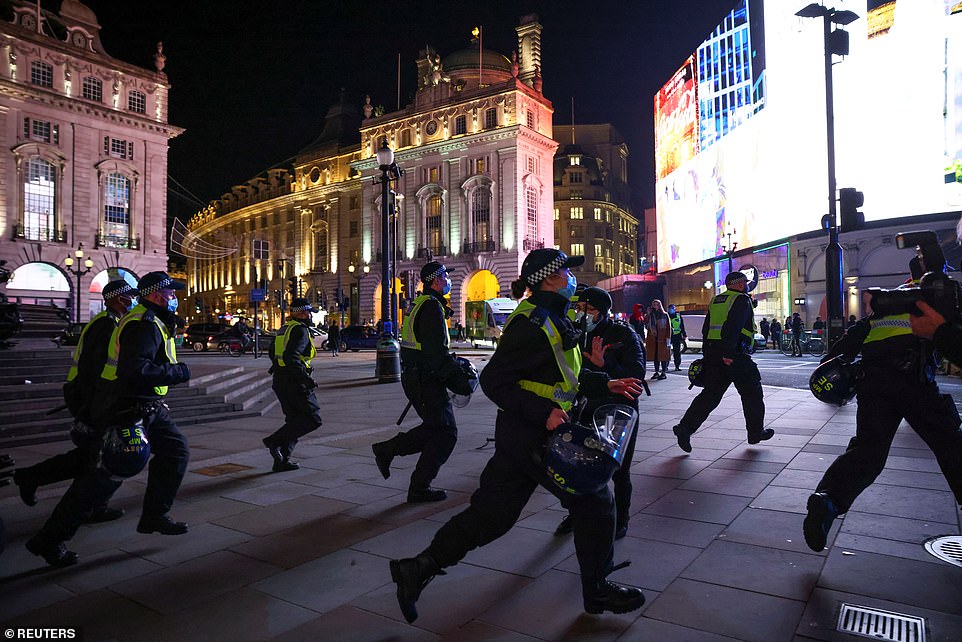 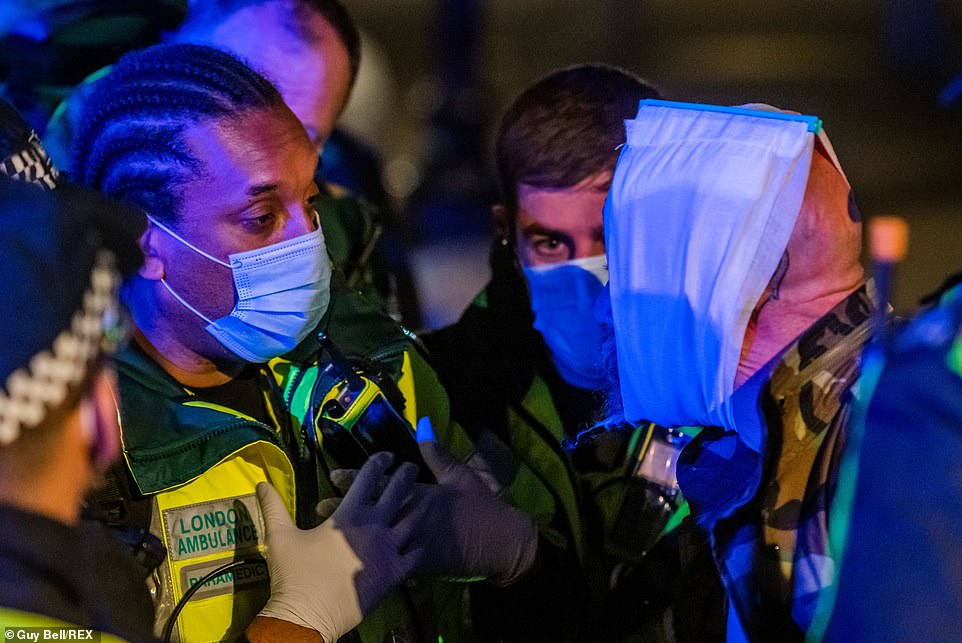 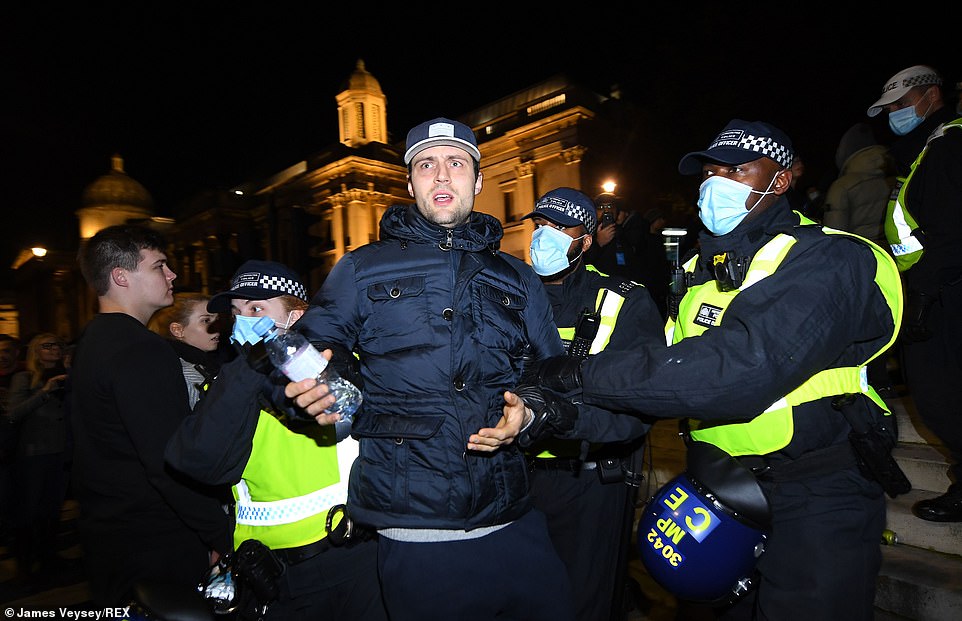 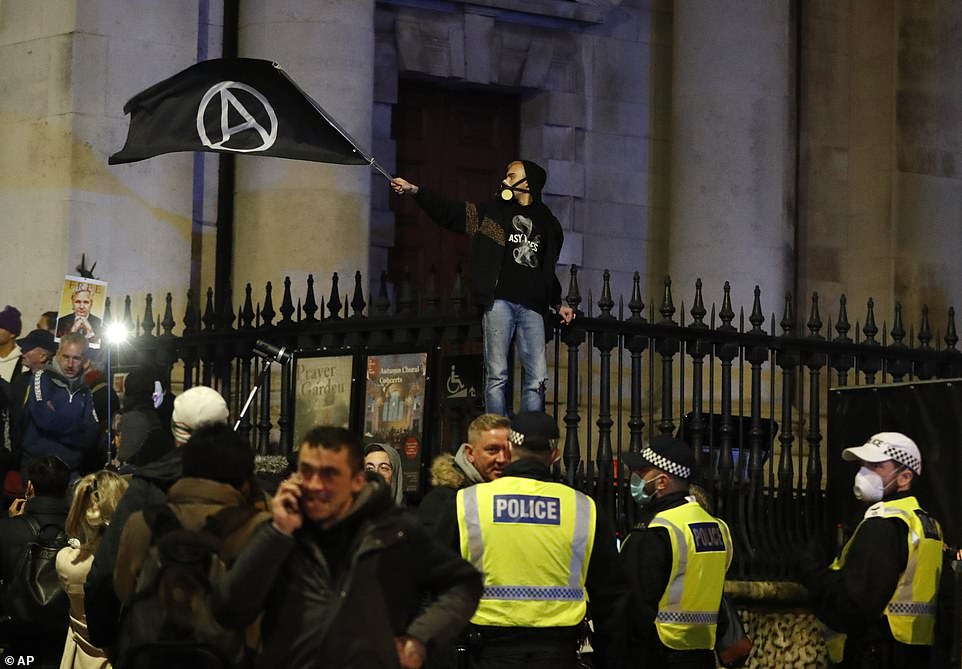 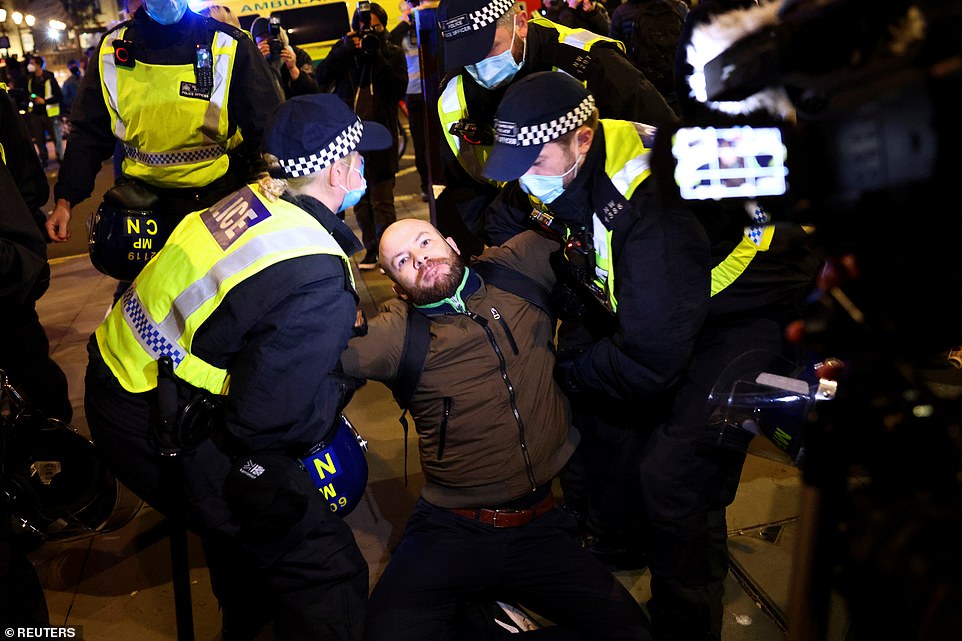 Several demonstrators were seen being detained by officers during the anti-lockdown and Million Mask March protest in Trafalgar Square, London, yesterday

It later issued an update that the protestors had started to make their way through the capital as they continued to ignore officer demands.

The force said: ‘A large crowd of protesters are at Oxford Street and continue to gather.

‘Arrests have been made as demonstrators failed to comply with the directions of officers.

‘We continue to urge people to go home. We remain in a health crisis.’

Commander Jane Connors, who is leading today’s operation, said: ‘Our main priority this evening has been to keep Londoners safe. We are eight months into this national pandemic and frankly there can be no excuse for people to dangerously breach regulations which are there to prevent further spread of Coronavirus.

‘Tonight, a crowd of people chose to ignore the new regulations, to behave irresponsibly and meet in a dangerous manner. More than 100 of these people have now been arrested and will have to face the consequences of their actions.

‘We expect the number of arrests to increase as our policing operation continues into the night. I would continue to urge people across the city to keep yourselves safe and stick to the regulations.’

England today entered its second national coronavirus lockdown which is due to last until December 2.