Demonstrations against Melbourne's stage four lockdown and the state government's road map for reopening were planned for both the popular running track the Tan and Fitzroy Gardens at 11am. 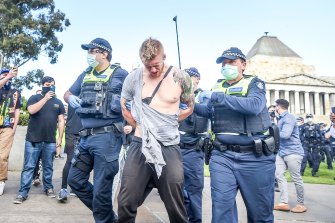 Police making an arrest after a scuffle with protesters at the Shrine of Remembrance last Saturday.Credit:Justin McManus

The organiser of the Tan rally Tony Pecora – a former candidate for Clive Palmer's United Australia Party – appeared in the Melbourne Magistrates Court on Friday via video link after his arrest on two counts of incitement.

The court heard Mr Pecora used an online alias to create anti-lockdown protest events on Facebook, including Saturday's planned protest at the Tan.

Hundreds of anti-lockdown protestors converged on the Shrine of Remembrance and later Albert Park Lake last weekend, with intense clashes between police and demonstrators resulting in 17 arrests and more than 190 fines being issued to those breaking stay at home directions.

Earlier this week, more than 1300 people indicated that they were either interested in attending or planning to attend the protest at the running track that encircles Melbourne's Royal Botanic Gardens.

The page promoting the event claimed the walk is legal, "allowing citizens to come together, get healthy and talk about getting our freedoms back", organisers wrote.

Anti-lockdown advocates were sharing details of the Fitzroy Gardens protest online on Saturday morning, with photos emblazoned with the phrase "Human Rights Matter. End The Lockdown Now. Take Back Our State".

Police urged protesters on Friday to be "less selfish and a bit more grown up", with Victoria Police Assistant Commissioner Luke Cornelius admitting it was “incredibly frustrating” to have to continuously urge people not to attend the protests.

“To be honest, I feel a bit like a dog returning to eat his own vomit. None of us want to do that and I’m sick of it, really,” he said.