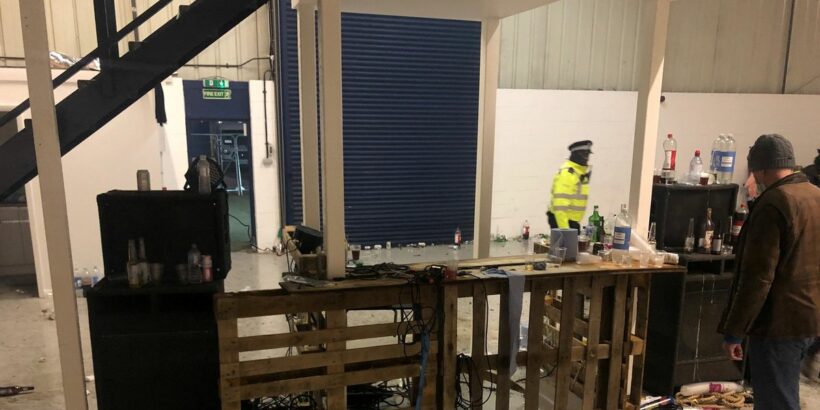 Officers in one county handed out fines of more than £18,000 after New Year’s Eve revellers flouted Tier 4 Covid restrictions for illegal raves.

Essex Police slammed people who chose to "endanger themselves and others" by attending unlicensed events to see in 2021 instead of adhering to coronavirus restrictions.

Assistant Chief Constable Andy Prophet said it handed out fines of over £18,000 in organiser and fixed penalty notices over the course of the evening.

He said their actions put a "strain on our NHS on New Year's Eve," with one cop threatened as he was trying to do his job.

One church rave is understood to have been attended by over a hundred people who had heard about the party through a conservation society in the Essex area.

Mr Prophet said the group "decided that partying was more important than protect other people" and “seized their equipment."

Five people were also arrested in connection with the event and a large number of fines handed out to "those who think this behaviour is acceptable."

In a Facebook post, Essex police shared images from inside the rave that showed empty plastic cups strewn all over the floor.

A large DJ area was also set up at the front of the church with purple mood lights, loud speakers and a bottle of what appears to be champagne near the decks.

Revellers posted their own images to Snapchat throughout the night, with one girl wearing skimpy shorts snapped holding a large object on fire.

In another picture, a partygoer posted a picture of Belvedere vodka and a bottle of Courvoisier with a caption that read: "Vibes for the night."

Assistant Chief Constable Andy Prophet said: “I’d like to firstly thank everyone across Essex who stayed at home and did the right thing last night.

“You’re protecting our NHS and you’ve allowed us to attend a large number of callouts across the county, including arresting three people on suspicion of murder in Rayleigh following the tragic death of a man in Worcester Road.

“Unfortunately, there were others who decided to blatantly flout the coronavirus rules and regulations and, ultimately, they decided that partying was more important than protecting other people.

“We’ve seized their equipment, arrested five people, and issued a large number of fines to those who think this behaviour is acceptable.

“We need you to keep yourselves, other people, and the NHS, safe. Thank you again to everyone who spent their New Year’s Eve in a responsible, legal, way."