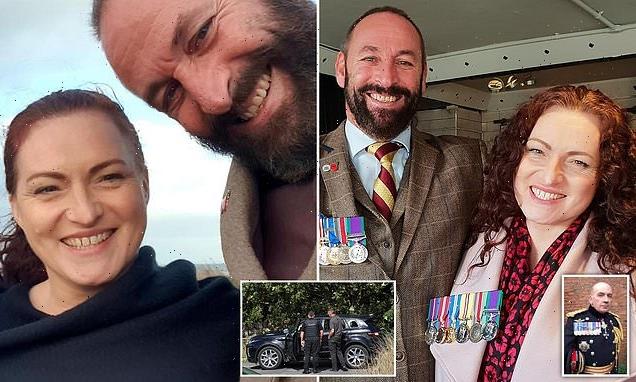 A former Army couple who killed themselves in a suicide pact had their house raided by police just four days before their deaths, it has emerged.

Officers investigating the sharing of child pornography searched the home of Peter and Deborah McGuinness on July 29 last year and seized a number of devices.

On August 2, the couple died in their car by carbon monoxide poisoning at a Dorset beauty spot, leaving poignant notes for their family, saying ‘It’s time for us to leave this world.’

Friends and family are still mystified over why the couple, who held a Mexican-themed party at their home in Kingston-upon-Thames just a day before driving to Durlston Country Park in Dorset, chose to kill themselves.

A coroner in Bournemouth heard this week that Mr and Mrs McGuinness were visited by PC Vicky Currie, and colleagues from the Metropolitan Police Online Child Sexual Abuse and Exploitation team on July 29, 2020. 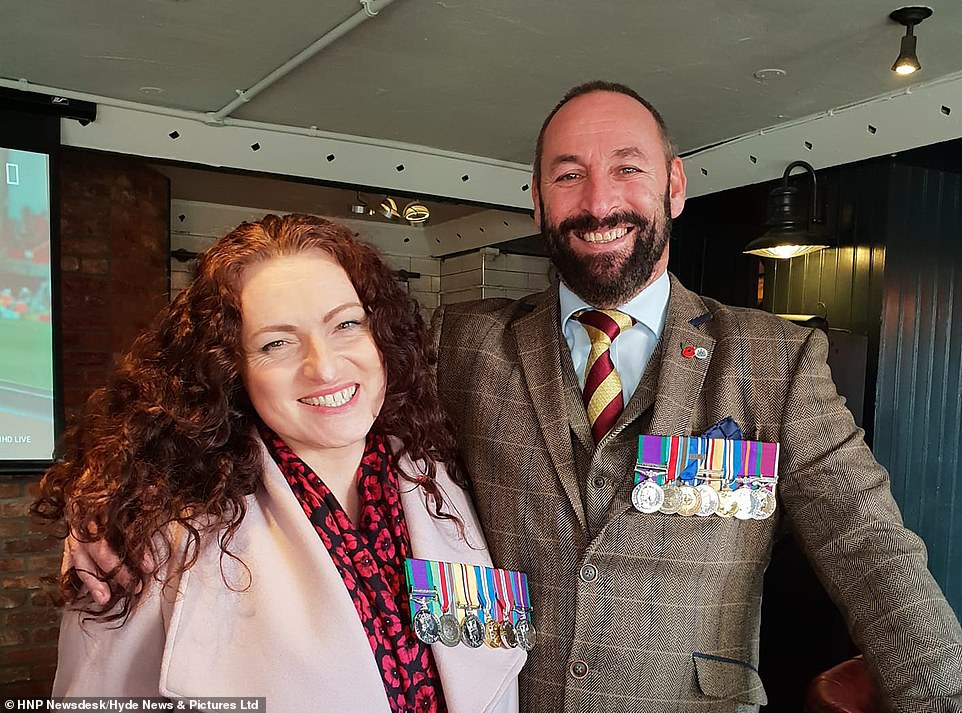 Peter McGuinness, 54, and wife Deborah (pictured), a former PA to three heads of the military, were found dead in a Range Rover at a remote beauty spot 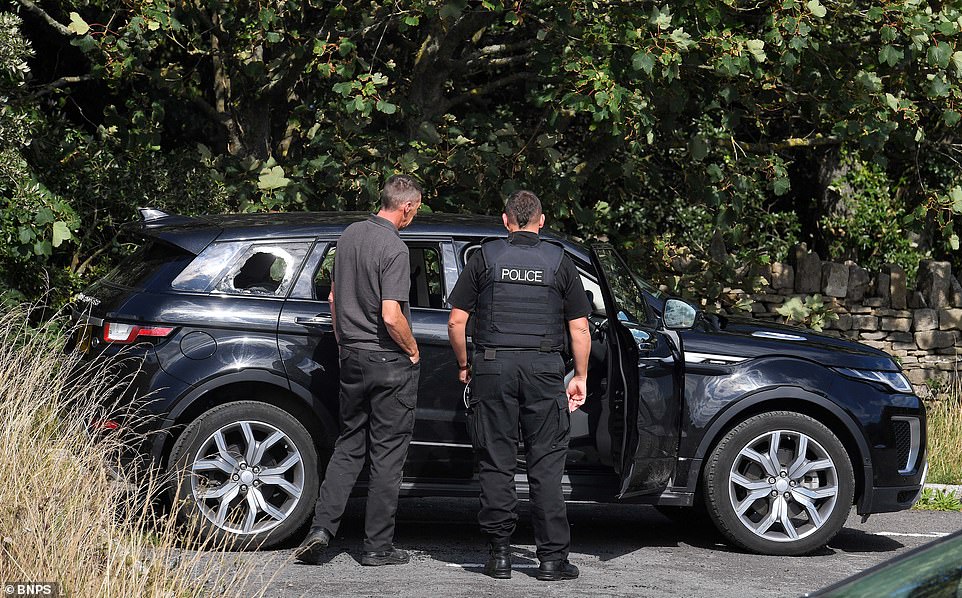 Cards containing money and poignant messages to family members were also found at the scene in the car park at Durlston Country Park, near Swanage, Dorset

She told the court: ‘In the morning I went to the home address. I had no previous contact with them. They were assisting police with their enquiries.

‘They were both spoken to together on the day and both of them seemed fine, happy and were joking with us.

‘When we left I had no concerns and they didn’t mention anything to us or any mental health going on, both were completely fine when we left the address.’

A Met spokesperson told MailOnline: ‘Our thoughts remain with the families of Peter and Deborah at this sad and difficult time.

‘Officers from the Met executed a search warrant at the address of Mr and Mrs McGuinness as part of an investigation into the sharing of indecent images of children.

‘No arrests were made and a number of devices were seized from the property.

‘This investigation was ongoing at the time of their death.

‘As is usual after a death following police contact, a referral was made to the Met’s Directorate of Professional Standards and the IOPC. No misconduct issues were identified.’

Mr McGuinness, 54, and his wife Deborah, 49, a former PA to three heads of the Army, were found dead in a Range Rover at a remote beauty spot after spending several weeks planning their death, the inquest heard.

Mr McGuinness had suffered from depression, possibly caused by PTSD following several tours of Iraq, and had talked about taking his own life before.

But Mrs McGuinness, who had been given the all-clear from cancer just five months before her death, had no history of mental illness.

The devoted couple died of carbon monoxide poisoning and told their loved ones in poignant notes found in the vehicle said: ‘We are sorry to leave you and for the heartache it causes.

‘This is our time to go – neither of us can be without the other. It’s not suicide – It’s time for us to leave this world.’

Also found dead in the hired vehicle was their pet cat they had taken with them from their home in Kingston upon Thames, Surrey.

Cards containing money and poignant messages to family members were also discovered at the scene in the car park at Durlston Country Park, near Swanage, Dorset. 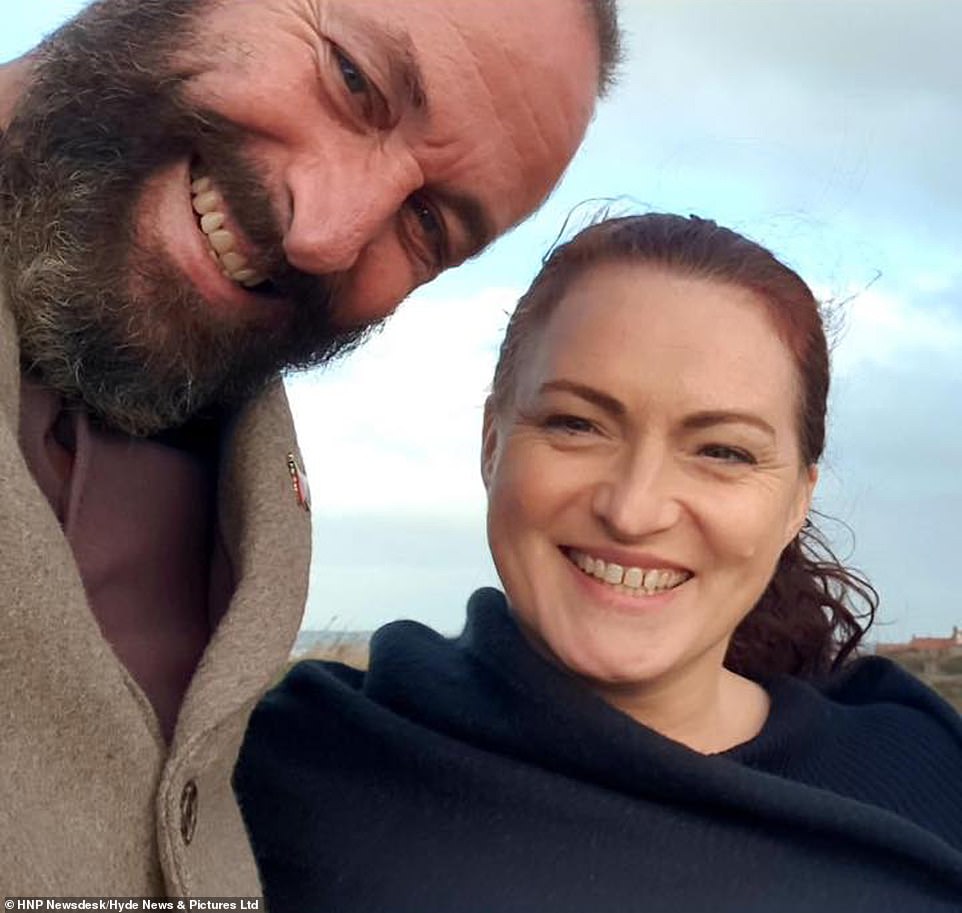 Mr McGuinness had suffered from depression, possibly caused by PTSD after several tours of Iraq, and had talked about taking his own life before. But Mrs McGuinnesss, who had been given the all clear from cancer just five months before her death, had no history of mental health illness 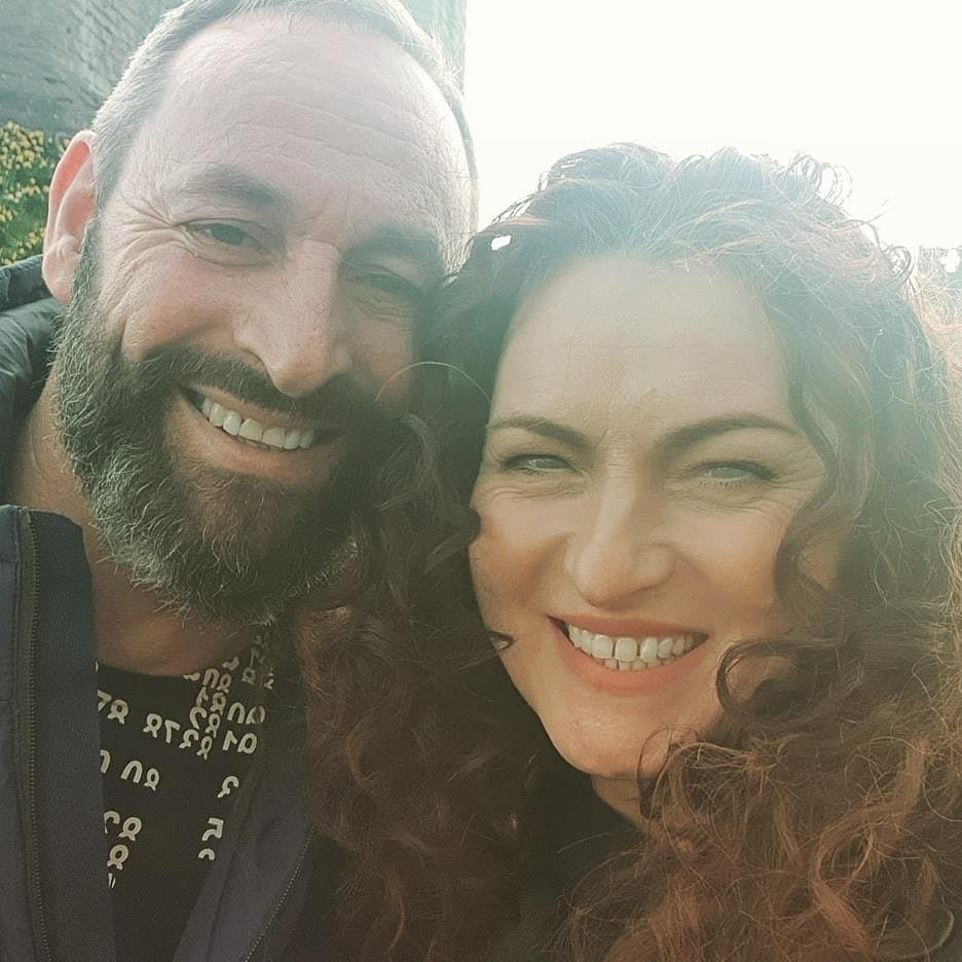 The couple, known by friends as Mac and Debs (above), each served in the Armed Forces in the Royal Regiment of Fusiliers for more than 20 years

The inquest heard Mr McGuinness, who served in the Royal Regiment of Fusiliers, left the Army in 2007 and had suffered recent bouts of anxiety and depression which may have been triggered by PTSD.

Mrs McGuinness, 49, had discouraged him when he had previously questioned whether life was worth living.

Mrs McGuinness served in the army from 1989 to 2012, doing tours in Northern Ireland, Bosnia and Iraq, and was personal assistant to three consecutive heads of the Army, Generals Sir David Richards, Sir Richard Dannatt and Sir Peter Wall.

He told the Sun newspaper: ‘It is only some comfort that she and her husband were together.’

Their family told the Bournemouth inquest that the couple had been together for 23 years and they were ‘confused’ by their deaths as ‘they seemed so happy’.

The hearing was told that in mid-July last year – about two weeks before their deaths – the couple started searching online for dealing with wills.

They threw a Mexican-themed fancy dress party at their home on August 1 for friends and drove to Durlston Country Park the next day.

Giving evidence, Mrs McGuinness’s mother Rosemary Carlisle said: ‘As a family we are so confused as to why they chose to end their lives.

‘They threw a Mexican-themed party for Debs’ birthday on August 1 and there was no indication about what would happen next as they were talking about going on holiday to Spain and buying a flat.’

Giving evidence about the party, army friend Thomas Rutherford said: ‘They were both in fancy dress and seemed to be enjoying themselves a great deal.

‘There was no indication that anything was amiss.’

The next day, they drove a Range Rover Evoque hire car down to Dorset and it was captured on CCTV entering the car park at about 6pm.

The vehicle was spotted at about 7.30am the following morning by a staff member at the park. 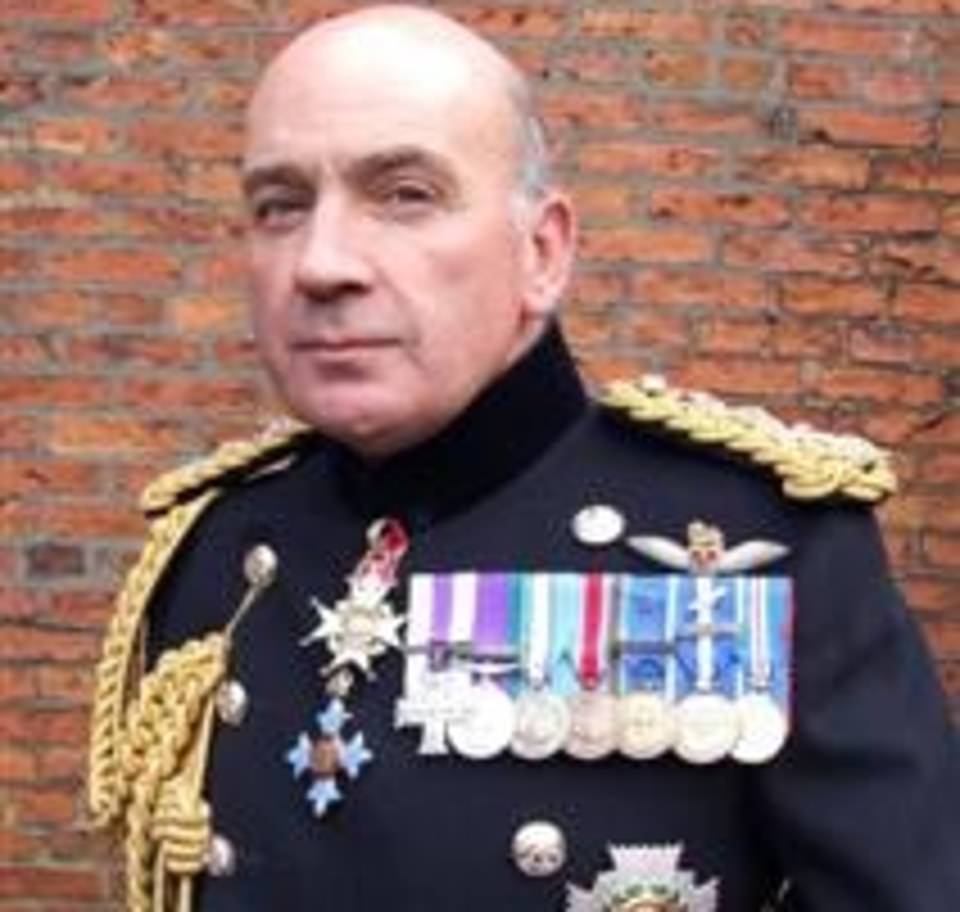 Sir Richard Dannatt paid tribute to Mrs McGuinness, calling her a ‘model soldier’ and the couple’s deaths ‘a double tragedy’ 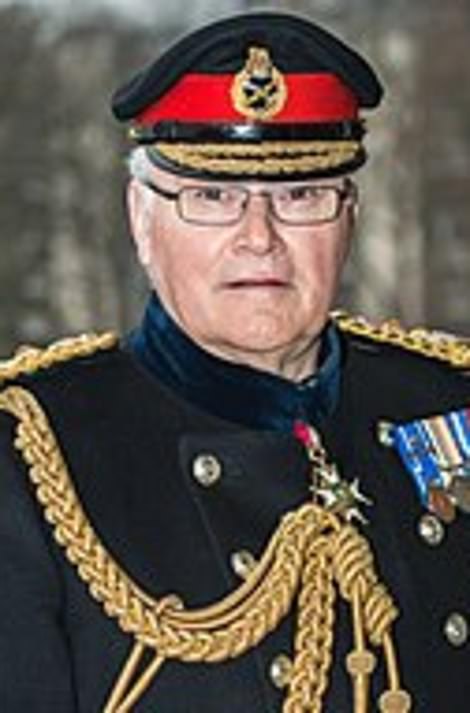 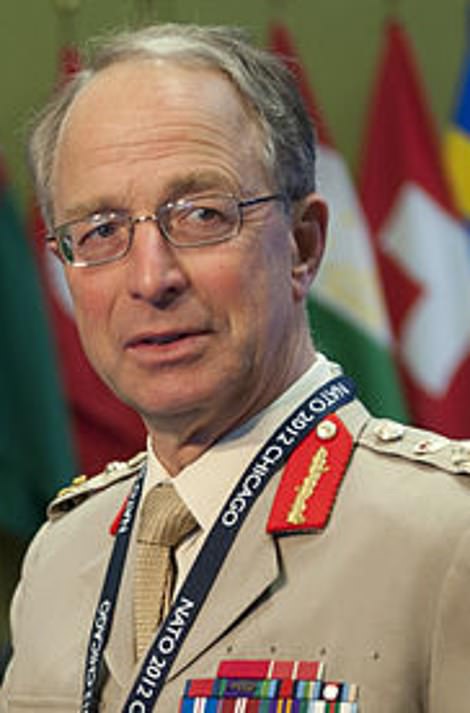 She banged on the windows to try and wake the pair who were reclined in the driver and passenger seats but after getting no response called 999.

The emergency services forced entry to the vehicle and found the pair lifeless inside. They were pronounced dead at the scene. Their dead cat was in the footwell.

A post-mortem examination carried out by pathologist Dr Robert Blahut ruled out foul play and said their cause of death was carbon monoxide poisoning.

A search of the couple’s computer history showed that they had looked at websites for doing online wills in mid-July.

In the car, they left a notepad with passwords inside it for their electronic devices and advice on what to do with their ashes.

At the time of their deaths, Mrs McGuinness was working as an office manager at the same security firm as her husband, who was an insurance handler.

Mrs McGuinness’s niece Esther Carlisle, who lived with the couple before moving to Taiwan, said Mr McGuinness had got angry when his son asked him if he had PTSD in 2018.

She said: ‘They were together for 23 years and loved each other dearly. Peter got low sometimes and said he didn’t think he’d live till he was 60. 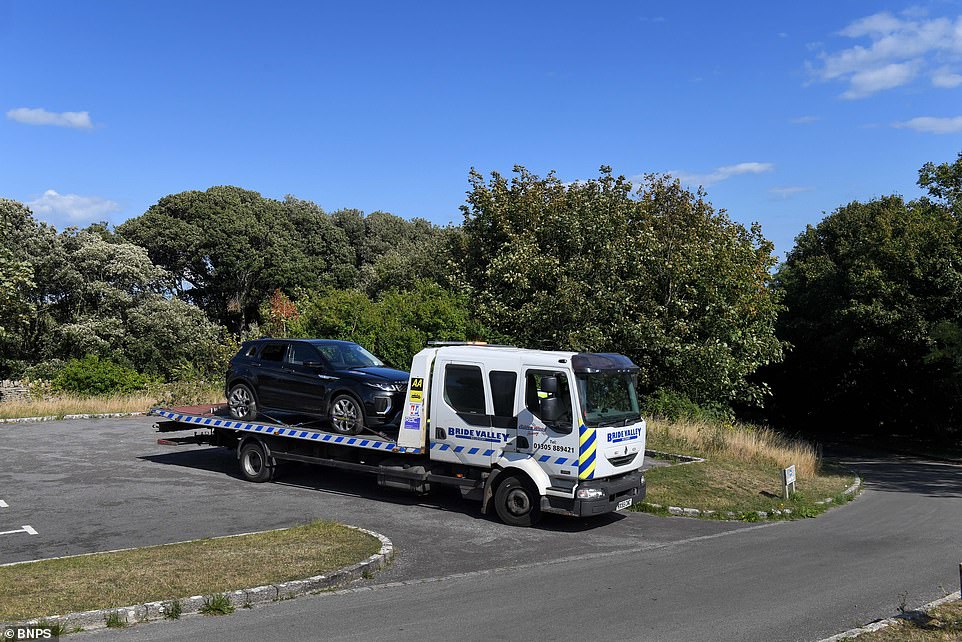 In the car (pictured), they left a notepad with passwords inside it for their electronic devices and advice on what to do with their ashes

‘I remember the only time he got angry and it was when his son suggested he might have PTSD and suggested he get help.’It was a regular occurrence for his army friends to commit suicide and he would not be shocked by it.’

Dorset Coroner Rachael Griffin, who recorded a conclusion of suicide for both parties, said of the notes found in the vehicle:

‘Some of the notes were in Peter’s writing and some were in Deborah’s writing. There was a card with some money in it, a card for the children and another to the family.’

She concluded: ‘It is very clear to me that Debs and Peter were devoted to each other and were popular, hardworking and social people.

‘Their behaviour to their close family and friends in the days leading up to their death gave no indication of what was going to happen.

‘Peter had been diagnosed with depression but on the other hand Debs had no history of mental health conditions and had actually discouraged Peter when talking about not wanting to be alive.

‘I’m satisfied on the balance of probabilities that they did the act that caused their deaths and in doing so intended these consequences.’