Police respond to illegal gatherings across UK as they break up house parties and seize music equipment despite fines of up to £10,000 for organisers

Police shut down several illegal gatherings last night after new lockdown rules were brought in across the UK ahead of the bank holiday weekend.

Under the new measures, which came into force on Friday after the Metropolitan Police alone responded to more than 1,000 unlicensed events since the end of June, organisers of illegal raves will be hit with £10,000 fines.

Thousands of pounds worth of equipment was seized by Essex Police ahead of an unlicensed music event the force said was due to take place in Harlow on Saturday afternoon.

Chief Inspector Lewis Basford said organisers of such events should ask themselves if it was worth the risk of the new fines.

He said: ‘My final message is to the organisers: we will seize the equipment – I don’t care if you’ve hired it from someone or if it’s yours, we will break up your event, and we can now fine you up to £10,000.’

Humberside Police requested that the public avoid the area around the Buck Hotel in Driffield, East Yorkshire, due to an incident on Sunday morning. No further details were available.

West Midlands Police said early on Sunday it had dealt with about 90 reports from the public about possible breaches of restrictions ‘but we’ve not had to use our enforcement powers’. 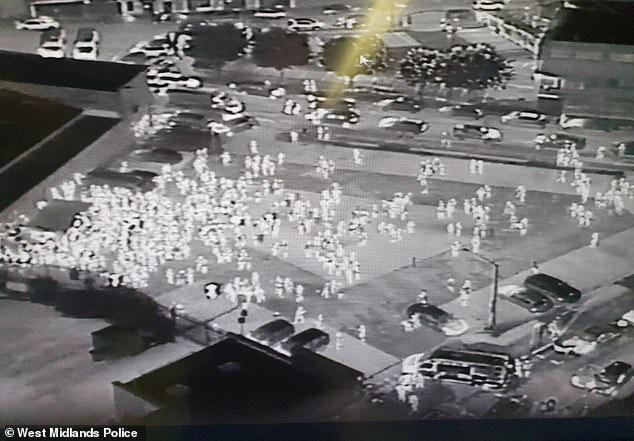 More than 200 revellers flouted restrictions at a rave in Birmingham last weekend. West Midlands Police said early on Sunday it had dealt with about 90 reports on Saturday

The force added: ‘Tonight’s been dominated by reports of house parties, rather than the really big gatherings we’ve seen earlier in recent weeks.’

West Yorkshire Police said a man was arrested after DJing at a street party on Wepener Mount, Harehills, while five other people at the gathering were fined.

Superintendent Chris Bowen said: ‘We hope people will recognise the ongoing risks of holding or taking part in events such as this but where intervention is needed, we will fine people and make arrests.’

The new measures also mean people not wearing masks and participants in unlawful gatherings can be fined starting at £100, doubling for each repeat offence up to a maximum of £3,200.

Home Secretary Priti Patel has defended the legislation, saying it represents a crackdown on ‘the most serious breaches of social distancing restrictions’. 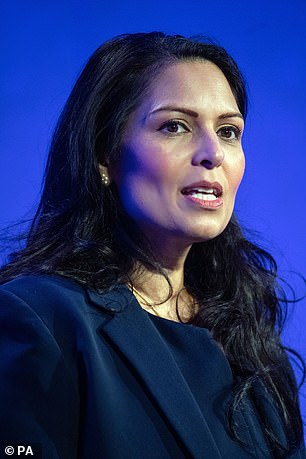 Home Secretary Priti Patel has hit out at illegal rave organisers, who face £10,000 fines, warning them they are ‘not above law’

Writing in The Daily Telegraph, she said: ‘We will not allow this breathtakingly selfish behaviour from a senseless minority to jeopardise the progress we have made together.’

She lashed out at the organisers of illegal raves, warning them they are ‘not above the law’.

Ms Patel said the legislation represents a crackdown on ‘the most serious breaches of social distancing restrictions’.

Metropolitan Police Federation chairman Ken Marsh, however, warned the legislation will mean ‘absolutely nothing’ for enforcement in London.

He said: ‘It could be good for areas outside London, but it means absolutely nothing to us here.

‘People just set up a music box in the middle of the street and say ‘it’s not mine’, it’s utter nonsense.’

He called for clearer legislation which would allow officers to ‘be more forceful clearing the area immediately, close the area down, the Government need more forceful wording around groups of people gathering’.

But a police chief has argued confusion over the guidelines is being used by some as an ‘excuse’ to break the rules.

Andy Rhodes, Chief Constable of Lancashire Constabulary, said there was a ‘world of difference’ between people acting sensibly and others who were ‘flagrantly’ ignoring the rules.