Officers have seized a double-decker bus that was housing Windsor’s homeless population for the royal wedding.

Homeless people that were using the bus were ‘evicted’ today after officers took control of the vehicle, alleging the driver did not have the correct licence.

David Michael, founder of the Ark Project which brought the bus to Windsor Castle, said police were seizing it because he does not have a public service vehicle licence. 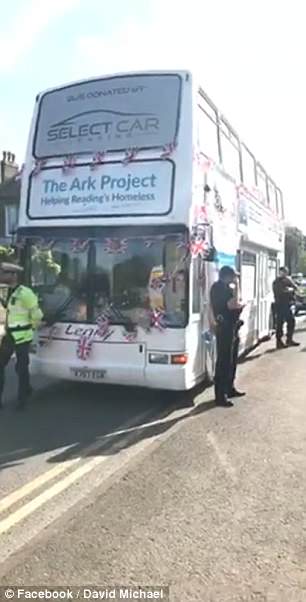 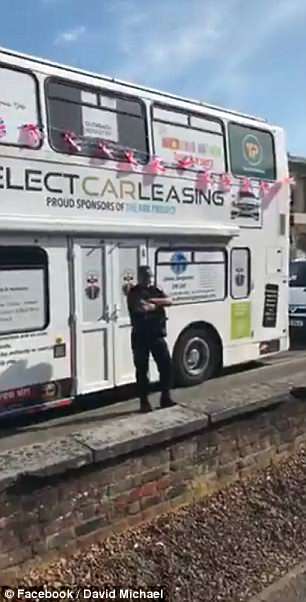 Homeless people that were using the bus were ‘evicted’ today after officers took control of the vehicle, alleging the driver did not have the correct licence 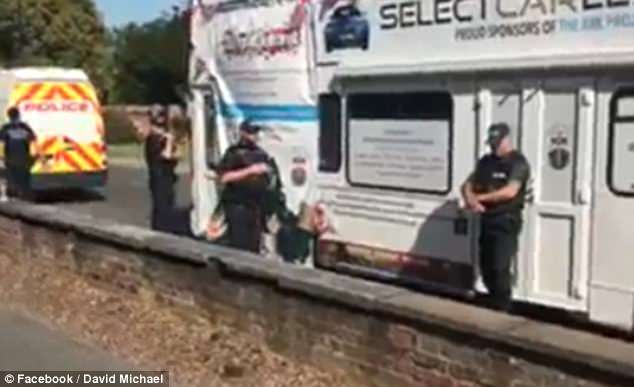 David Michael, founder of the Ark Project which brought the bus to Windsor Castle, said police were seizing it because he does not have a public service vehicle licence

Broadcasting from the scene today, Mr Michael said: ‘Homeless people [were] evicted off it.

Mr Michael claimed that even after arranging for a friend who did have a public service vehicle licence to arrive at the scene, police responded: ‘No, we’re seizing it.’

Mr Michael said police were demanding £1,500 to release the bus from an impound, which the charity could not afford.

A fundraising page has since been launched, titled ‘Free “Lenny” Our Homeless Bus’.

The charity previously said it was working the streets of Windsor in an effort to give the town’s homeless a place to stay.

It comes after Windsor’s rough sleepers were the subject of a controversial suggestion by local Conservative council leader, Simon Dudley. 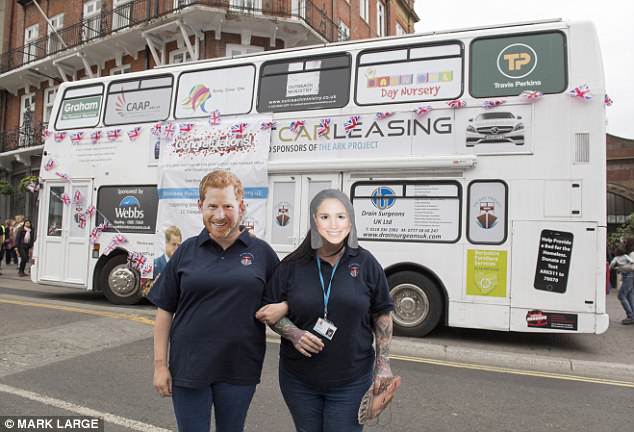 Victoria Dowling and Sarah Willmott from the Ark Project, a homeless charity helping the homeless of Windsor by offering them a bed 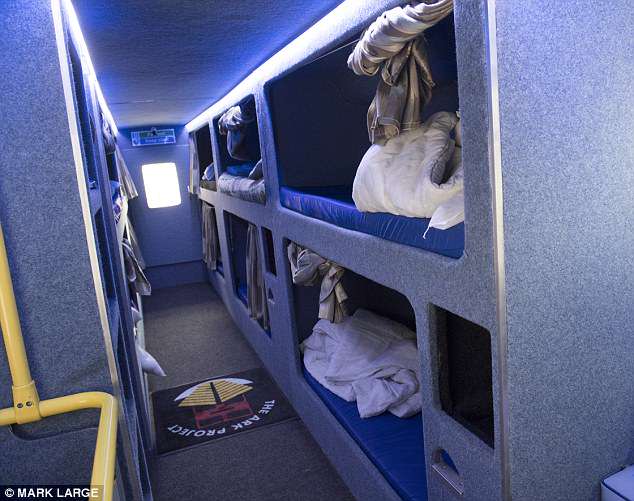 The Ark Project, a charity which until recently was based solely in Reading, operates out of a bus which includes 10 beds and a kitchen to prepare warm food

Cllr Dudley said they should be removed for the Royal Wedding on Saturday.

The remark, made in a written letter to Thames Valley Police, proved unpopular and created significant public backlash.

Michael Longsmith, 42, who volunteers at The Ark Project, said: ‘We have been working in Windsor about six months, but the bus has only just come because we have had to offload our Reading clients to come here.’

The charity, which aims to put the homeless they take on board into rehab, have so far picked up two rough sleepers from Windsor’s main streets. 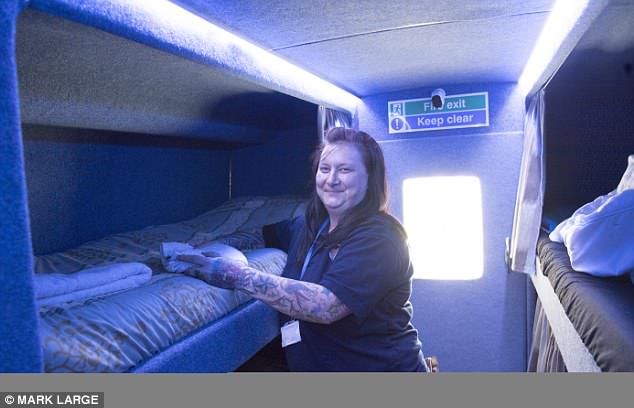 Sarah Willmott from the charity shows off the bus, which can accommodate 10 homeless people at any one time

Many do not want to accept the charity’s offer of help because they fear losing money during this weekend’s popular event, Mr Longsmith said.

Commenting on the homelessness situation in the Royal Borough, he said: ‘It’s stayed exactly the same. Nobody’s doing anything. They are still here.

‘The police won’t move them on because they know the press will be all over it, but the excuse they are using is that footfall is going to crush them.

The entire areas around Windsor castle is being placed on lock-down as anti-terror bollards are erected and a heavy police presence moves in, ready for Saturday’s nuptials between Meghan Markle and Prince Harry. 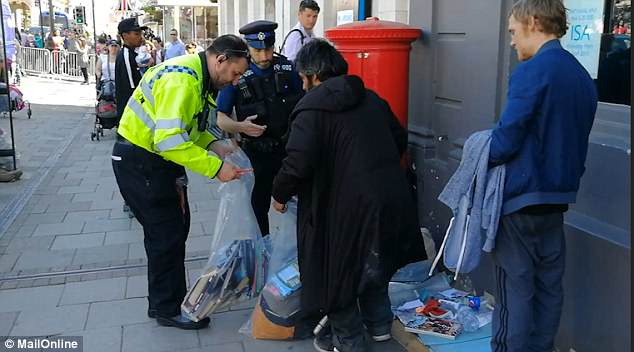 Ahead of a dress rehearsal on Thursday the Berkshire town is being swept for safety risks.

However, while measures were taken to improve security, officers also moved rough sleepers.

The video clip shows officers asking two homeless men, who had pitched up outside a Barclay’s Bank opposite Windsor Castle, to pack up their items in see-through bags which are later sealed and taken away in a police van.

They were told the bags, which were filled with bedding, books and magazines, will be kept in storage until Monday.

A woman clutching a blue sleeping bag is seen talking to police at first before she quickly moves on clutching her possessions.

Police said today they were offering the homeless an opportunity to store their belongings until after the big day. 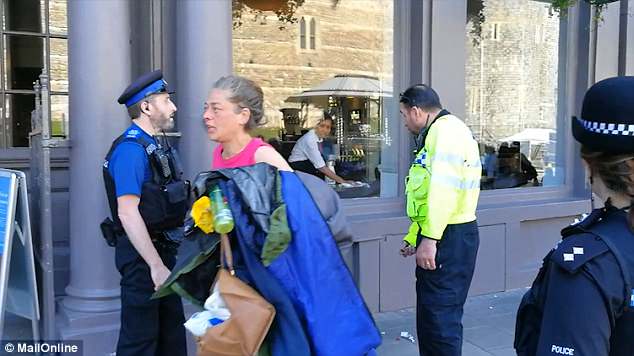 The officers ask two homeless men, who had pitched up on Tuesday afternoon outside a Barclay’s Bank opposite Windsor Castle, to pack up their items in see-through bags

Thames Valley Police say the move is for security reasons and to avoid any obstructions on Windsor’s tightly-packed pavements come Saturday when up to 100,000 people are expected to cram into the Berkshire town for the wedding of Prince Harry and Meghan Markle.

Local council leader Simon Dudley sparked outrage last year when he called for homeless and beggars to be cleared out of Windsor in time for the ceremony – which takes place on Saturday afternoon – in case they painted the town in a ‘sadly unfavourable light’.

In the video, one of the homeless men who was made to pack away his possessions says: ‘There was big speak on the TV about the homeless being helped but when they said helped they meant removed.

‘I understand that there isn’t the resources but Children In Need and Red Nose Day have been going on for how long? Is it getting any better? No, worse.

‘Any charity – legally six per cent – that’s all they have to give. I understand they have people who they employ and stuff like that. But we help other countries when there’s enough British people who need help.’

At least six bags were removed and taken to the back of a parked police van. The men were allowed to keep small essential items, like bottles of water, with one of the officers heard telling them: ‘Right, is that all you need for the next few days?’

Thames Valley Police are working closely with The Royal Borough of Windsor and Maidenhead, The Windsor Homeless Project, and local support services in order to offer support to local homeless people.

Officers are also working with a homeless project in Sussex to offer further support.

A Thames Valley Police spokesman said: ‘A scheme has been set up for those who choose to store their belongings at the Windsor Homeless Project during the Royal Wedding, and our officers have been assisting with transport of belongings, however this is entirely voluntary to ensure the safety of the homeless community.

‘We will continue to engage and work in partnership to support the communities of Windsor. 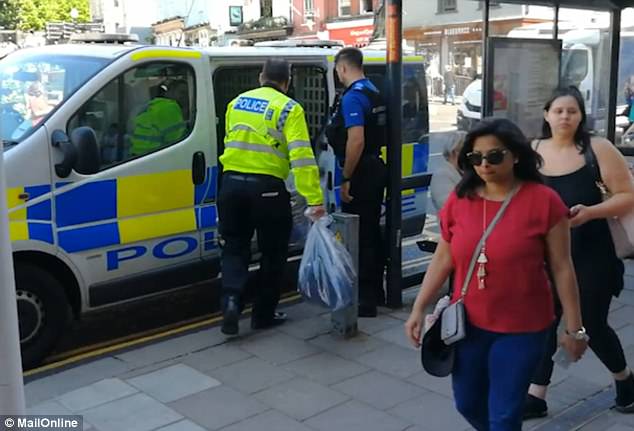 ‘The Royal Wedding is a national celebration and everyone is welcome, however everyone in Windsor on the day of the wedding will be subject to a search and screening. Anyone with large items that are deemed to be a security risk are likely to have those items removed.’

Councillor Dudley, a Conservative, complained about rough sleepers in Windsor on Twitter while he was on a Christmas skiing holiday.

On his return to Britain, he wrote a letter to Thames Valley policing boss Anthony Stansfeld calling for action and copying in Theresa May and Amber Rudd.

He wrote: ‘There is a growing concern amongst residents, businesses and visitors regarding the number of people occupying the streets of Windsor, who are begging during the day and in some cases taking occupancy throughout the night.’ 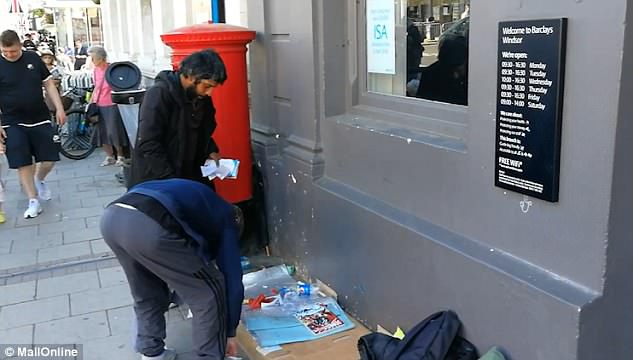 ‘The level of tourist interest is set to multiply with the Royal Wedding in May 2018, and there are increased concerns from our residents about their safety.

‘The whole situation also presents a beautiful town in a sadly unfavourable light.’

His comments sparked a national row and were criticised by Prime Minister Theresa May, MP for neighbouring Maidenhead, and homeless charities.

The wedding will be one of the most heavily guarded events in history, with police snipers perched on roof-tops, special-forces troops mingling with crowds and road blocks in place.

A no-fly zone will also be in force during the service.