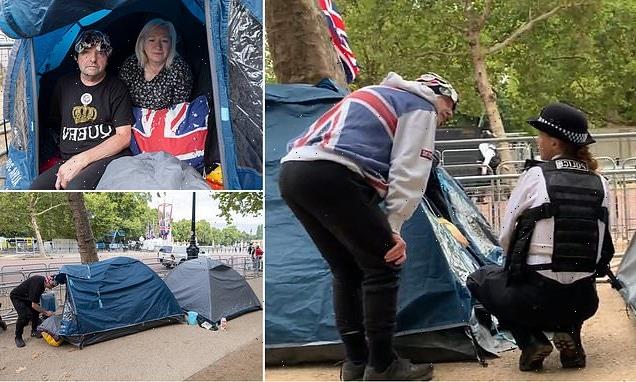 You can’t camp here! Police tell royal superfans on the Mall to pack away their tents for ‘security reasons’ as crowds descend on Buckingham Palace ahead of Queen’s funeral

Police told royal superfans camping out on the Mall to pack away their tents for ‘security reasons’ as crowds descended on Buckingham Palace ahead of the Queen’s funeral.

Mr Loughrey said they’d already been there since Thursday, camping out to pay their respects to the Monarch.

But video footage has emerged showing police telling Mr Loughrey and Ms Scott they would have to take their tents down with an officer explaining it was ‘for security reasons’.

‘I understand why you guys are here but obviously there’s loads of stuff going on, we can’t have tents here for security reasons and under regulations,’ a policewoman said.

‘So I’m going to ask you to pack everything up and take your tent down. 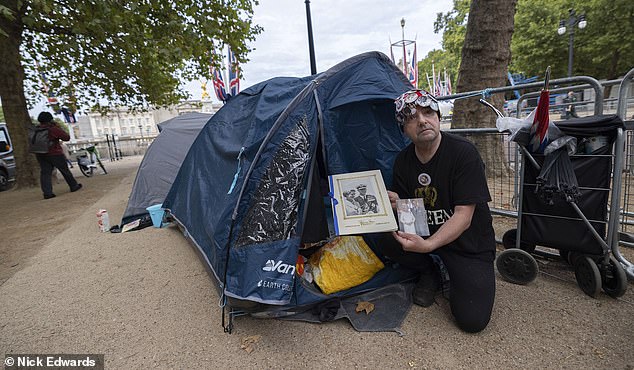 Royal superfan John Loughrey, 67, had planned to camp out for 10 days of mourning the death of the Queen 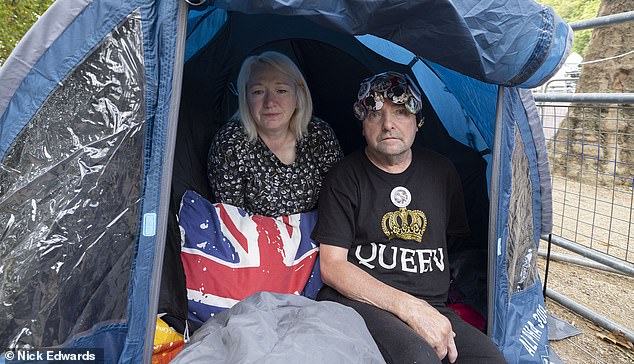 John Loughrey from London and Maria Scott from Newcastle have been camping on the Mall since the news came that Queen Elizabeth II had died, they have to take their tents down during the day due to crowds

‘It’s up to you where you go but if you do end up camping somewhere else you’ll probably be asked the same thing again.’

She then says ‘you can sit here, nobody’s going to stop you from sitting here, but you just can’t have a tent here’.

Ms Scott earlier told The Sun: ‘We’re here for the whole ten days – we just have to be.

‘The three of us go to all these Royal events together and we’re not afraid to sleep on the path to be in line to see The King.

‘We’re very comfortable – we have a blow up bed and food from nearby shops. It’s a small price to pay to be here.

‘The Queen has been such a constant presence in our lives. She’s got the country through so much.’

Ms London had said they wanted to be there for the events that were happening every day.

Mr added that they would take turns to pay their respects to the Queen’s coffin so that they could keep their spot on the Mall.

After news of the Queen’s death spread on Thursday, thousands of shocked mourners descended on Buckingham Palace as the nation paid tribute to the Queen.

Crowds sang the National Anthem, applauded and cheered, while others quietly wept, lost in personal memories of the monarch.

Supporters scaled the wrought iron railings outside the palace to fix bouquets to the gates – the first of what has become a sea of floral tributes.

Within hours of the announcement the crowd swelled into the Mall, where jubilant scenes marked the Queen’s Platinum Jubilee just three months ago.

Royal superfan John Loughrey wept as paid tribute to the ‘inspirational’ Queen, who he met on two occasions.

He said: ‘She was inspirational. She served her duty. Her duty always came first, her family next… God save the Queen.’

Mr Loughrey said he would camp near the Palace for 10 days as a mark of respect before lighting a candle at Westminster Abbey.

Royal fan Mary Johnson, 63, said on Thursday: ‘At first no one knew what to do, how to react.

‘Then one person started singing and everyone around them joined in. It was the perfect reaction – a dignified tribute sung with love and respect.’

Retired history teacher Annette German, 84, held back tears as she told how her grandmother had taken her to Buckingham Palace for the Queen’s coronation.

She said: ‘I was here with my grandmother for the coronation and when I heard the news I knew I should come here.

‘I share a birthday with the Queen and I remember hearing her speech on her 21st birthday, when she dedicated her life to the country.

‘She did just that and served us all her life.’