Washington: Fresh from a dramatic trip to North Korea and ahead of a historic summit, US Secretary of State Mike Pompeo says the United States will provide economic help if the country gives up its nuclear weapons, and perhaps ultimately agree to normalised relations. 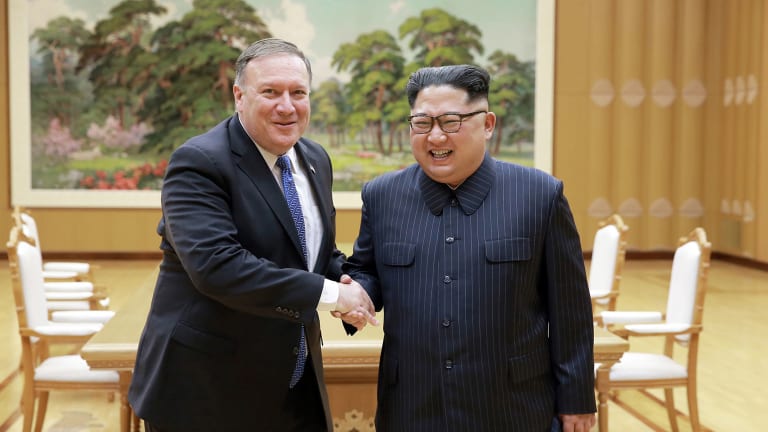 Pompeo, two weeks and one day on the job, returned to the US on Thursday from what he called a "productive" meeting with North Korea's Kim Jong-un to agree on details for the Trump-Kim summit. He brought home three American prisoners freed by Kim in what Pompeo said was an important gesture that helped pave the way for the meeting.

Contrasting the wealth of South Korea to the poverty and deprivation of the North, Pompeo said the Trump administration was willing to provide assistance to North Korea if Kim met US demands to forfeit its nuclear weapons. Kim has said that North Korea now has the capability to strike the continental United States.

"If Chairman Kim chooses the right path, there is a future brimming with peace and prosperity" for his people, Pompeo said at the US State Department, following a meeting with the foreign minister of South Korea on Friday, US time.

"If North Korea takes bold action to quickly denuclearise, the United States is prepared to work with North Korea to achieve prosperity on par with our South Korean friends," Pompeo added.

The Trump administration is planning a first-ever meeting between a sitting US President and a leader of North Korea for June 12 in Singapore.

It is a matter of fierce debate among diplomats and Korea experts whether Kim would get rid of his arsenal, which has long been central to his nation's sense of identity and security. He has said he is willing to "denuclearise" the Korean peninsula, but it is not clear he means what Washington means.

For any significant disarmament, Kim would want something in return. Pompeo's offer of economic aid probably is aimed at addressing that point.

Pompeo also suggested that the US and North Korea could one day be "partners". For nearly seven decades, since the Korean War, the two have been in a state of hostilities, with North Korea isolated from most nations.

Pompeo, describing his conversations with Kim as "warm", said he and the North Korean leader reached "a pretty good understanding between our two countries about what the shared objectives are." He added, without elaborating, that he told Kim that the US government was prepared to provide him with "assurances".

Pompeo said he insisted to Kim that a "robust verification" by inspectors would have to be part of any deal to ensure that North Korea had "fully denuclearise."