Dublin:  On the first day of his historic trip to Dublin the Pope has met with Irish clerical abuse survivors and warned that social media poses a threat to "real life relationships" and it could end up "imprisoning people in a virtual reality".

Pope Francis has faced a lukewarm reception and scattered protests on his trip to Ireland.

Even his vow to rid the church of the "scourge" has been dismissed as a disappointment by some of Ireland's wounded victims.

But others who met with him in private say they're heartened that he would respond to their plight, including two of the thousands of children who were forcibly put up for adoption for the shame of having been born to unwed mothers.

Survivors of one of Ireland's wretched mother and baby homes plan to hold a demonstration on Sunday (GMT+1) at Tuam, site of a mass grave of hundreds of babies who died at a church-run home.

Pope Francis isn't scheduled to visit, but he says the description of the site "still echo in my ears". 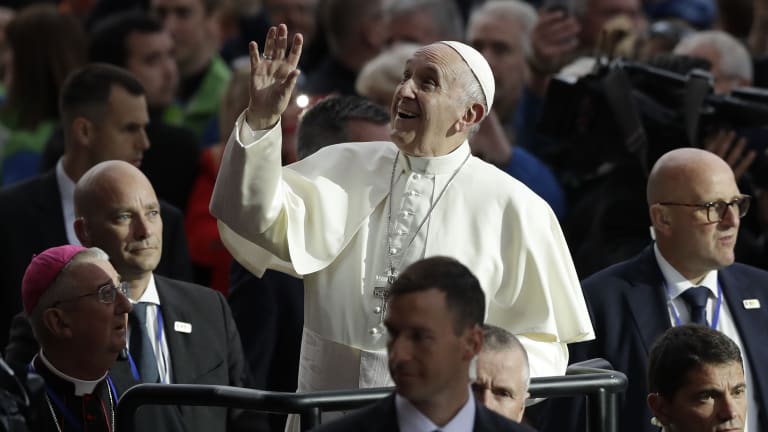 Pope Francis arrives at the Croke Park stadium for the Festival of Families, in Dublin, Ireland, on Saturday.

Speaking at a gathering in Dublin, the pontiff said families should be asking themselves whether they should cut down on their technology usage and spend more time with each other instead.

More than 80,000 people attended for a World Meeting of Families festival at Dublin's Croke Park on Saturday night.

About half a million people were expected to gather to hear Pope Francis address a huge outdoor Mass on the second day of his visit. A total of 500,000 free tickets were distributed for the religious event in Dublin's Phoenix Park on Sunday afternoon.

Earlier the Pope met for an hour and a half with eight survivors of clerical, religious and institutional abuse. 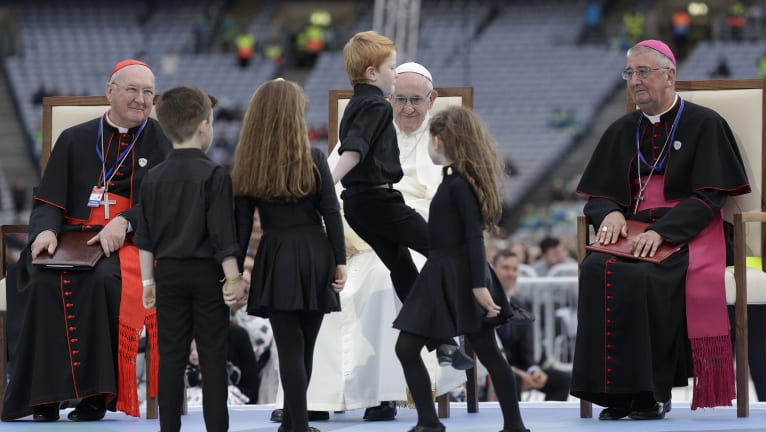 Pope Francis watches dancing children at the Festival of Families in Croke Park Stadium in Dublin, Ireland, on Saturday.

Two people from the Irish Coalition of Mother and Baby Home Survivors who attended the meeting said Francis apologised for what happened in the homes, condemned corruption and cover-ups within the Church, and referred to these practices as "caca", which the interpreter politely translated as "filth you would see in the toilet".

Later Pope Francis was treated to a special performance of Riverdance by a troupe of Irish dancers and a rendition of Ave Maria by Andrea Bocelli and Celine Byrne.

The pontiff said social media could serve to build a network of friendships and solidarity, but he warned it should only be used in moderation. 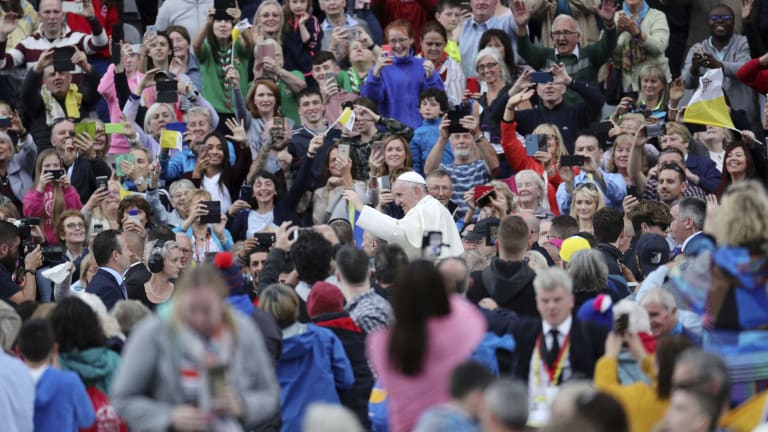 The reception of Pope Francis in Ireland has been described as ‘lukewarm’ but thousands flocked to see him at Croke Park, in Dublin.

He said it was important that social media "never become a threat to the real life relationships by imprisoning us in a virtual reality and isolating us from the very real relationships that challenge us to grow".

Families, the Pope said, should question whether they should be cutting down on the time they spend on technology and be spending more quality time with each other.

"When you use social media too much you go into a sort of an orbit, when at the dinner table, instead of talking to each other within the family each of you uses his phone to connect with the outside world," he said. "Then you go into an orbit."

He said it was dangerous behaviour because it takes away "the completeness of the family" and leads individuals "to a fuzzy life without any substance".

Pope Francis told attendees that holiness was about the "saints next door", those ordinary people who reflect God's presence in the life and history of the world.

He said the vocation to love and to holiness was not something reserved for a privileged few.

The Pope highlighted the difficulties some families, who have to flee their homes in search of security and peace, have to endure. 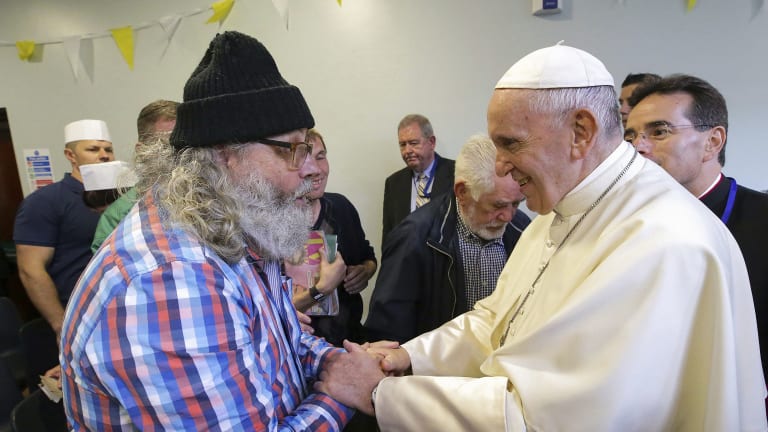 Pope Francis greets Aidan Walsh during a visit to the Capuchin Day Centre on Bowe Street in Dublin, as part of his visit to Ireland, on Saturday.

"A family's love and faith can be a source of strength and peace even amid the violence and destruction caused by war and prosecution," he said.

The three words that every family needs to know, the pontiff said were "sorry, please and thank you".

Pope Francis made the crowd repeat after him "sorry, please and thank you" and he advised families not to go to bed angry.

"When you quarrel … say you're sorry," he said.