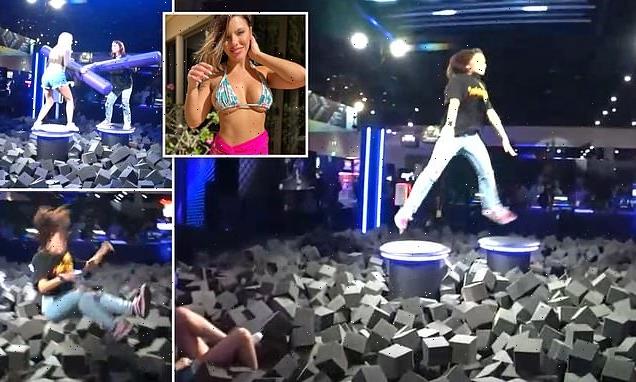 Chechik, who has about 803,000 followers on the streaming platform, attended the TwitchCon weekend event at the San Diego Convention Center where the horrid event occurred at a booth hosted by Lenovo Legion.

Footage showed Chechik participating in a risky activity on top of a small three-foot platform parallel to her opponent. The streamer held a noodle-like object and swung it at her challenger in hopes of knocking her into the foam pit.

Within seconds, Chechik claimed victory and celebrated with a toe touch before landing in the pit and being unable to get up.

‘You good?’ a man can be heard asking Chechik as she struggled to flip off her back.

‘I can’t get up,’ Chechik responded as a crowed stared at her from all around.

Multiple people rushed to her care as she struggled to move.

‘No, no she’s fine,’ a female announcer was heard joking in the background unaware of the severity of Chechik’s injuries.

‘She landed on her tailbone,’ another man can be heard telling the medic.

Chechik later posted a photo of herself glammed up in a hospital gown on late Sunday night with the caption, ‘I live here now.’ She has to undergo surgery to get a rod inserted in her back.

Lenovo Legion didn’t immediately respond to DailyMail.com for a comment. 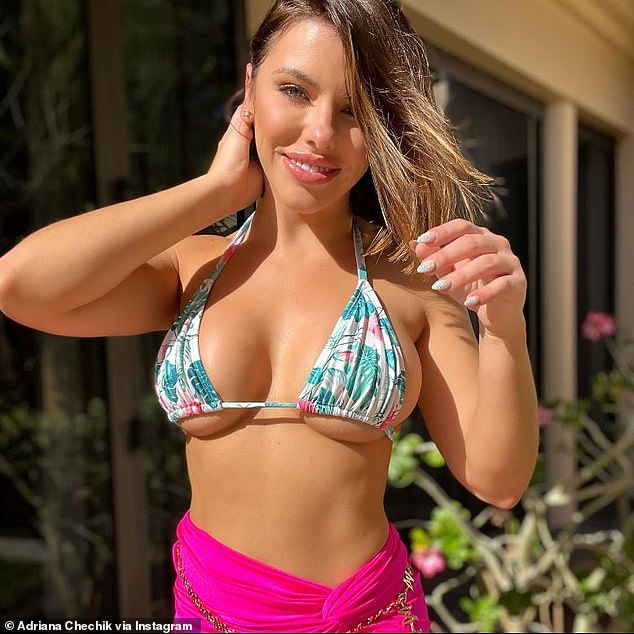 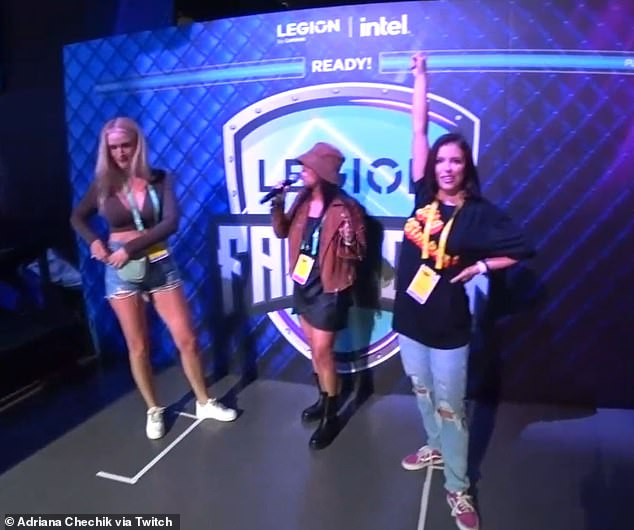 Chechik (right) is seen with her competitor minutes before she broke her back after slamming into the foam pit. The influencer was participating in the risky activity hosted by Lenovo Legion 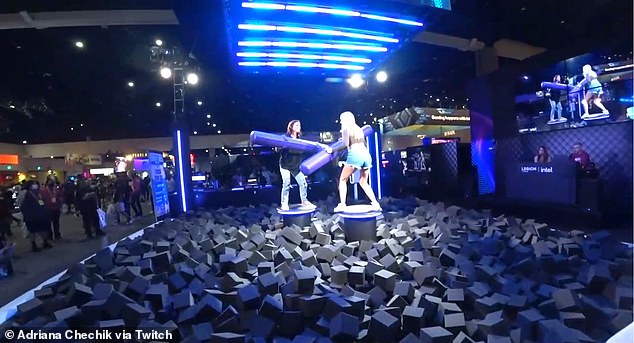 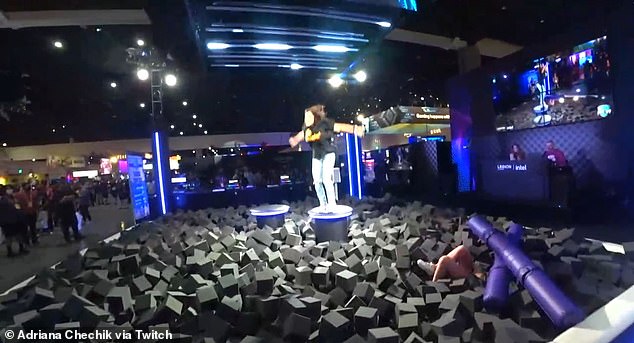 Chechik cheered toward the crowd in front of her while her opponent laid defeated. The adult star cheered and prepared to perform a toe touch 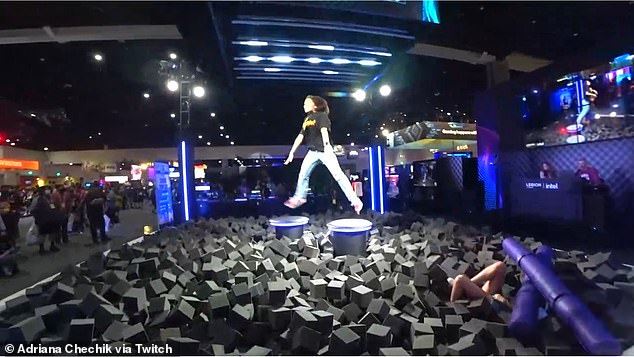 Chechik is seen mid-air as she cheers for her victory 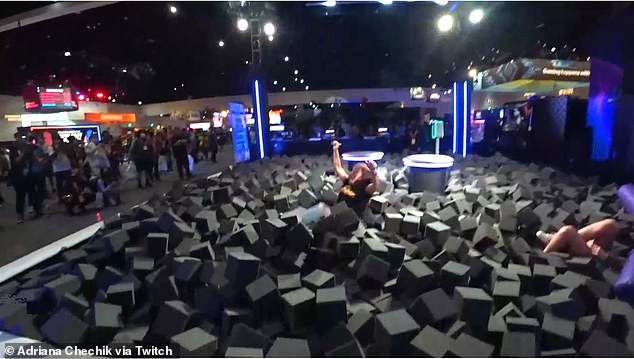 Within seconds, Chechik can be seen landing the fall on her tailbone while her enthusiasm fades 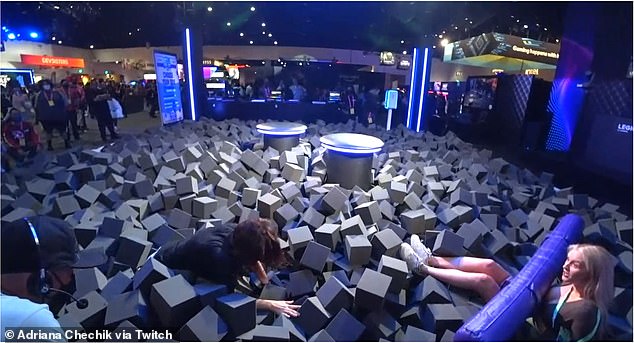 Chechik struggled to get up while others rushed to call the medic. She was seen crunched over in pain 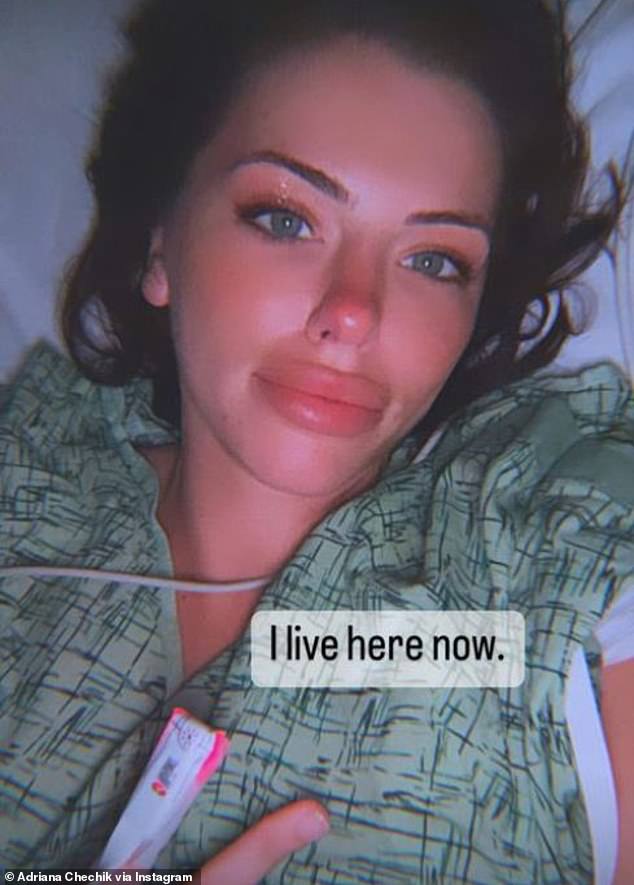 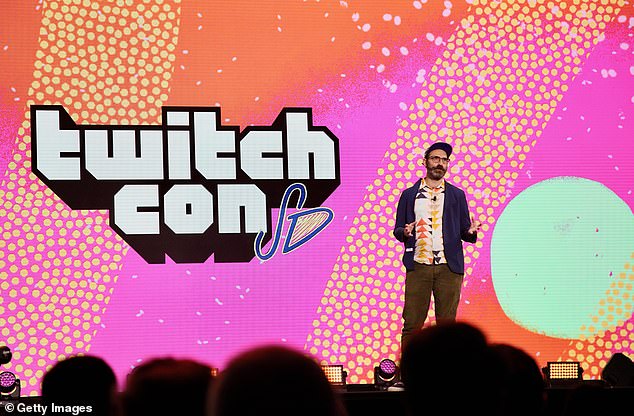 The horrid injury occurred at this year’s TwitchCon in San Diego. Pictured: Twitch DEO and Co-founder Emmett Shear on October 7

In a string of Tweets, the influencer called out the booth’s operator Lenovo Legion for their ‘carelessness’ in allowing for the foam pit to remain open after one person previously claimed to be injured.

‘Why did @LenovoLegion say here, you can dive in?’ she wrote while attaching a video from the company with the two booth announcers describing the fight between two men.

‘They put the pit up a second day after the 1st person injured their foot and ankle bad enough to leave #twitchcon in a brace. Multiple ppl were injured and they kept the pit open, said jump in the booty first.’

Participants were required to sign a waiver before participating in the activity.

Chechik recalled the moments she remained still as the medics rushed to get her out of the foam pit.

‘Special shout out to the random off-work EMT who got the workers at the booth to realize how bad I was injured and to make them keep me still and calm me down until others got there. U rly kept me from crying badly.’

She later added, ‘Last night was horrible, the pain I had felt like I’d rather die. This is gonna suck.’

‘I broke my bad in two places and am getting surgery to put a meter rod in for support today. Send your support. When it rains it pours and I am definitely feeling the rain right now.’ 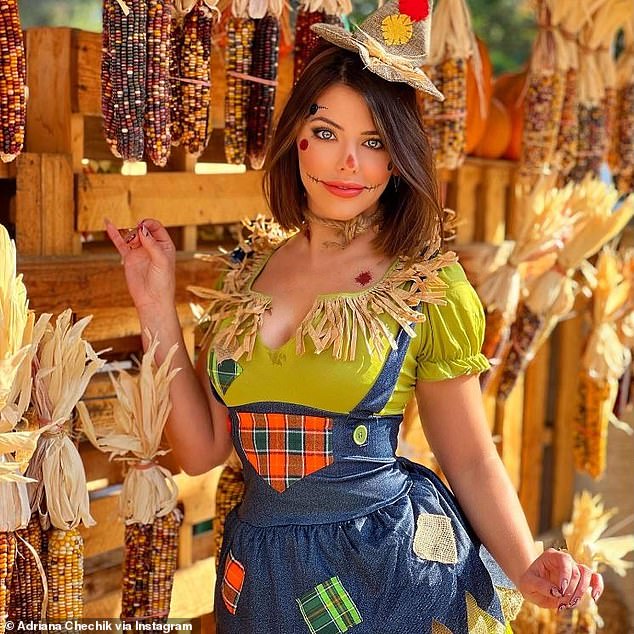 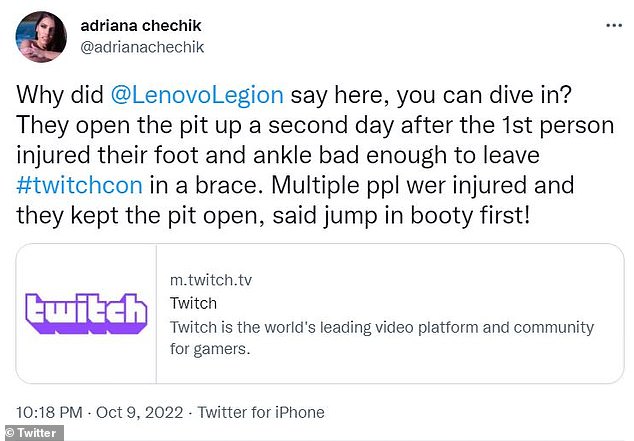 Another streamer, dubbed LochVaness, was also injured at Lenovo’s booth on Saturday.

The streamer posted a video of herself in the same foam booth battling her opponent before she jumped the pit after winning. Rather than slamming Lenovo, she took a hit at Twitch.

‘I will never be able to trust @Twitch at another convention in my entire life,’ she later wrote on Twitter while sharing a video of how she got her injuries.

‘Here’s how I dislocated my knee and sprained my ankle at their Lenovo Legion booth.’

LochVaness can be seen jumping into the pit and quickly dropping her jaw before the video is cut out.

She was briefly hospitalized before doctors deemed she didn’t break any major bones.

The streamer later posted a picture of her ankle being iced and elevated on Sunday with the caption, ‘This is NOT how I wanted to spend Twitchcon Day 3.’ 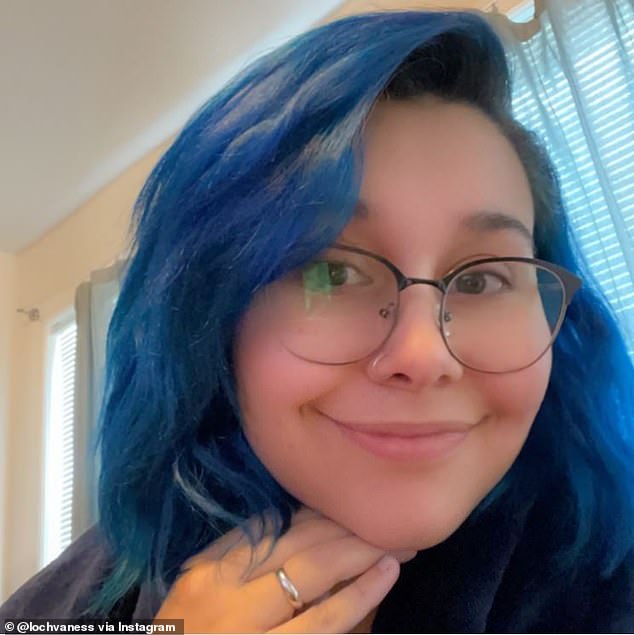 Another streamer, LochVaness, was also injured at Lenovo’s booth on Saturday 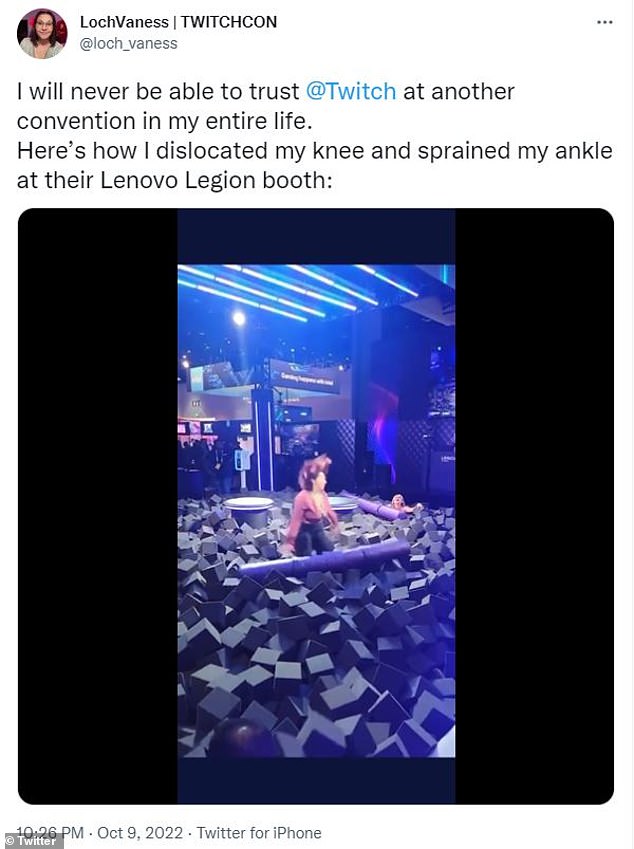 The streamer shared a video of the horrific incident on Twitter.  Rather than slamming Lenovo, she took a hit at Twitch 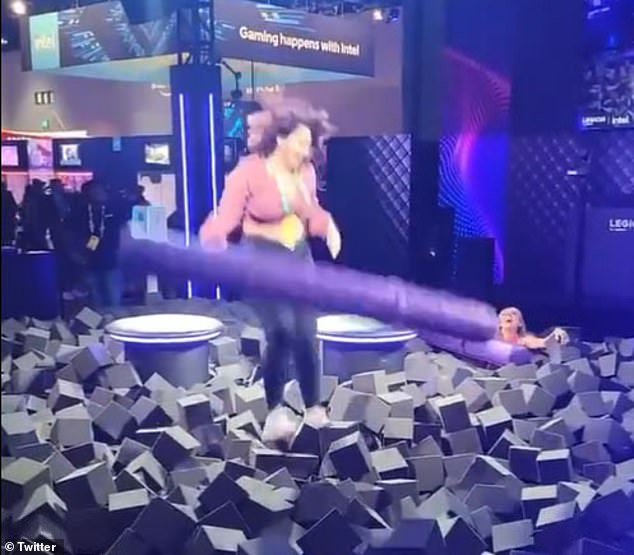 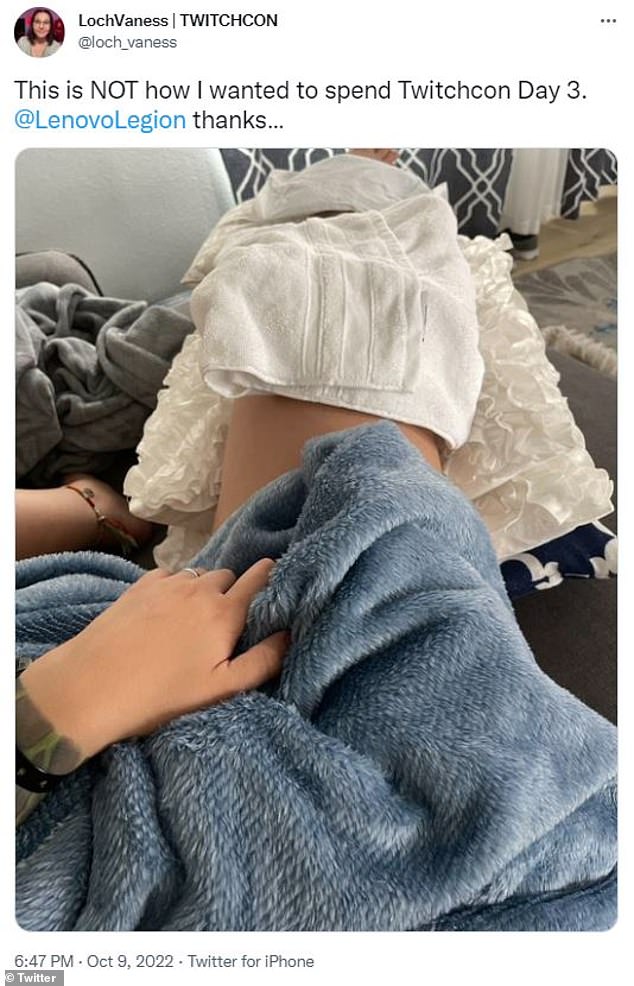 Many were outraged after the two incidents occurred at the weekend convention, especially after Twitch failed to shut down Lenovo’s booth after LochVaness’s injury.

‘Holy sh** waiver or not, that’s irresponsible as shit to not have proper protection on the floor,’ one person wrote on Twitter.

‘Terribly upsetting,’ another wrote. ‘I hope they all make a healthy recovery.’

‘The pit is an act of negligence, full stop. Foam blocks on concrete? They’re lucky someone didn’t fall head first,’ another said.

One person said they suffered minor injuries from the pit.

‘Can confirm the pit was a bit shallow – I hit my knee pretty hard but not seriously the first time that I got knocked off of a podium,’ one person wrote. ‘Saw a lot of people purposely dive into the foam pit which was particularly concerning.’

Twitch didn’t immediately respond to DailyMail.com for a comment.