Portland Police Association Executive Director Daryl Turner argues one reason why members of the Rapid Response team resigned is that some elected officials did not support officers during the more than 150 days of riots in the city.

“We’re dealing with rioting at a level and sustained violence that we’ve never seen before,” Turner told NBC Nightly News.

Turner pointed to gun violence, low staffing, and efforts to defund the police as all contributing to the abysmally low morale.

“All those things play into the morale of a police officer coming to work every day, trying to do your job, trying to do it right with all these roadblocks in your way,” Turner said.

Fox News has reached out to the Portland Police department seeking comment on Turner’s remarks.

They come after all 50 members of the Portland Police Bureau’s Rapid Response Team (RRT) resigned from their voluntary positions over the indictment of Officer Corey Budworth for allegedly assaulting a photographer with his police-issued baton when a riot was declared outside the Multnomah Building last summer. 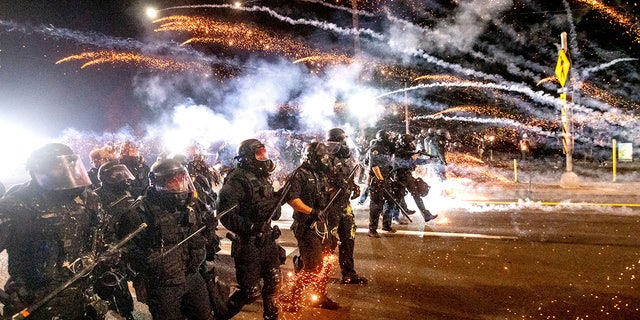 FILE: Police use chemical irritants and crowd control munitions to disperse protesters during a demonstration in Portland, Ore.
(AP)

Those same 50 officers keep their other assignments and remain employed by the police department.

Turner told Fox News that the city’s elected officials “encouraged and enabled some of the violence” that was taking place over more than 150 nights of riots in Portland and in turn contributed to the resignation of all 50 RRT members.