All along the counter at Bar Celona, in Mercado Little Spain at Hudson Yards in New York, patrons were holding glass watering cans above their heads. And what they were watering was themselves.

“I spilled a little, but not much,” said Amanda Horwitz.

“I spilled a lot,” her friend Tara Knapp added, laughing. “I think it’s really fun, but you should be wearing black.” When it was pointed out that she was wearing black, she replied, “That’s why I tried it.”

What they tried was the porrón (poh-ROHN), a traditional Spanish drinking vessel that can be filled with wine or cider or sangria or whatever you please. It looks like a piece of lab equipment or a bong, depending on your point of view. There’s a glass chimney on top; that’s the part you grip. And there’s a spout; that’s the part you aim at your mouth and pray your aim is true.

On a recent night at Bar Celona, a man from Spain who had used a porrón before performed the task with élan. But most of the first-timers managed only about 85 percent accuracy. They didn’t seem to mind the spillage.

“I think maybe why people do it is, it’s also fun,” Ms. Knapp said. “It’s more than just drinking wine.”

A growing number of restaurants and bars in the United States are using porróns. The jugs take a bit of explaining, but the management is usually armed with answers for the uninitiated. 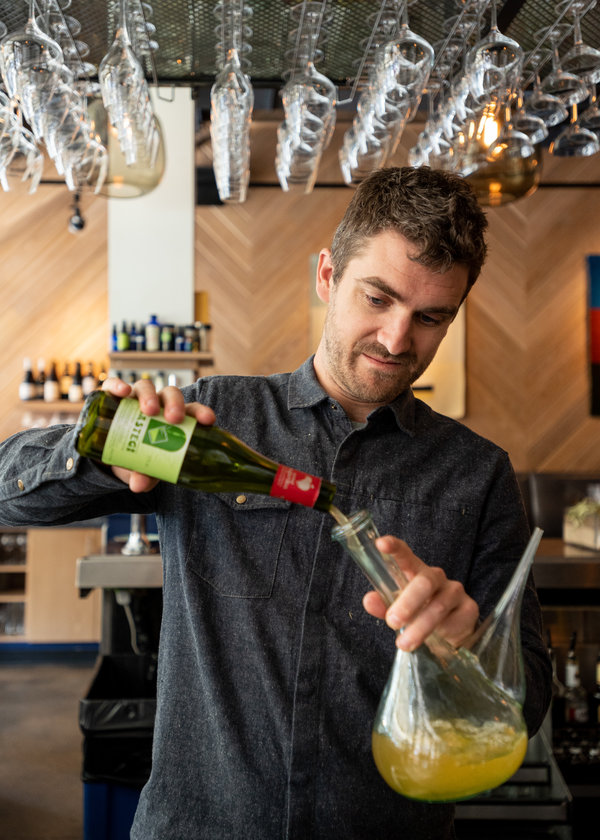 “They usually have to ask, ‘What is that?,’” said Michael Elmore, a partner and general manager of Arcana, a restaurant in Boulder, Colo., that uses porróns to serve its selection of ciders.

While some restaurants use them much like a decanter, to pour wine or sangria or cider into glasses, the traditional practice is to hoist the vessel over your head and pour the liquid straight into your mouth. This requires some practice, courage — and instruction from the server.

“The team is very well trained and very patient,” said Daniel Alonso, a managing partner at Bonhomme Hospitality, a Chicago group that uses porróns at nearly all its restaurants and bars, including Black Bull and Bordel. “You want happy guests. And you don’t have happy guests if they just ruined their shirt or dress.” For this reason, beginners are not encouraged to order a porrón full of red wine.

Porróns, in their current form, are thought to have originated in Catalonia in the mid-19th century or earlier. They may have descended from leather botas, or wineskins, and early examples were made of clay before glass became the preferred material.

André Tamers lived in Barcelona for a time after the 1992 Summer Olympics were held in that city. He grew so fond of the porróns he saw at restaurants that, when he founded the wine and spirits importing company De Maison Selections, he made the porrón its symbol. That didn’t go over too well with some Spanish colleagues.

“It was like putting a PBR can on your logo,” Mr. Tamers said. “It was this banal thing. Why would you do that?”

Indeed, just as porróns are gaining popularity in the United States, they have become increasingly rare sights in Spain, where they are regarded as relics from the past.

“Porróns belong to the ever-growing list of Spanish stuff Americans celebrate in their tapas bars and Spanish restaurants that you don’t really see in Spain except in certain contexts,” said Francois Monti, a Belgian spirits expert in Madrid.

“It’s kind of a U.S. phenomenon at this point,” Mr. Tamers conceded.

He may be partly responsible for that. Along with wine, he also sells porróns to restaurants. He first used them as a way to promote his new company and to sell Txakoli, a white wine from the Basque Country. Porróns weren’t easy to find, but he finally located a glass factory in Valencia that still made them. He placed the minimum order: 4,000.

Félix Meana, an owner (with the chef Katie Button) of Cúrate, a restaurant and bar in Asheville, N.C., has bought porróns from Mr. Tamers. Mr. Meana serves beer, sherry and cider in them, about 10 to 15 orders each night.

“It is a fun way to enjoy a drink,” he said. “When you see people drinking from it, they want to try it right away.”

Alex Pajor, a regular at Black Bull and Bordel, once used a porrón to break the ice during a dinner with his girlfriend’s parents. “Once we passed it around, everyone was able to laugh and was a bit loose,” he said. “It’s like having a chessboard on the table. It’s something to do.”

So infectious are the devices that many of the places that use them are also porrón vendors. You can buy them at Cúrate, Arcana and Mercado Little Spain.

The porrón got a visibility boost in April, when the founder of Mercado Little Spain, the chef José Andrés, demonstrated its use to Jimmy Fallon on “The Tonight Show.”

“Obviously, he gave Jimmy the one with red wine, and he spilled it all over,” said A.J. Ojeda-Pons, the Little Spain market’s beverage director.

The next time Mr. Andrés visited the market, he had just one question for Mr. Ojeda-Pons: “Are we selling porróns?”