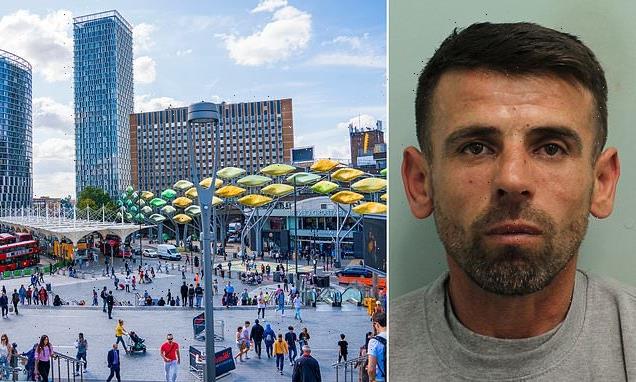 Sexual predator, 36, is jailed for 10-and-a-half years for raping intoxicated teenager in flowerbed after she was separated from friends in Westfield Stratford venue

A teenage girl sobbed in court today as the rapist who attacked her in a flowerbed in a secluded alley at Westfield Stratford shopping centre was jailed for over 10 years.

The 15-year-old girl, who cannot be named for legal reasons, was separated from her friends after a night of drinking at the Bat and Ball bar in Westfield on September 4 last year despite being underage.

At around 10.30pm, while ‘heavily under the influence of alcohol’, she was approached by Albanian national Rufat Kasamaj, 36, who was caught on CCTV observing her.

Sexual predator Kasamaj, of High Road, Leyton, east London, led his young victim to a secluded alleyway and ‘dragged’ her into a flowerbed before raping her.

Prosecutor Tim Forster told the Old Bailey: ‘She became separated from her friends after one of them got involved in some sort of fight and from her recollection, the defendant started touching her on her bum right at the start.’ 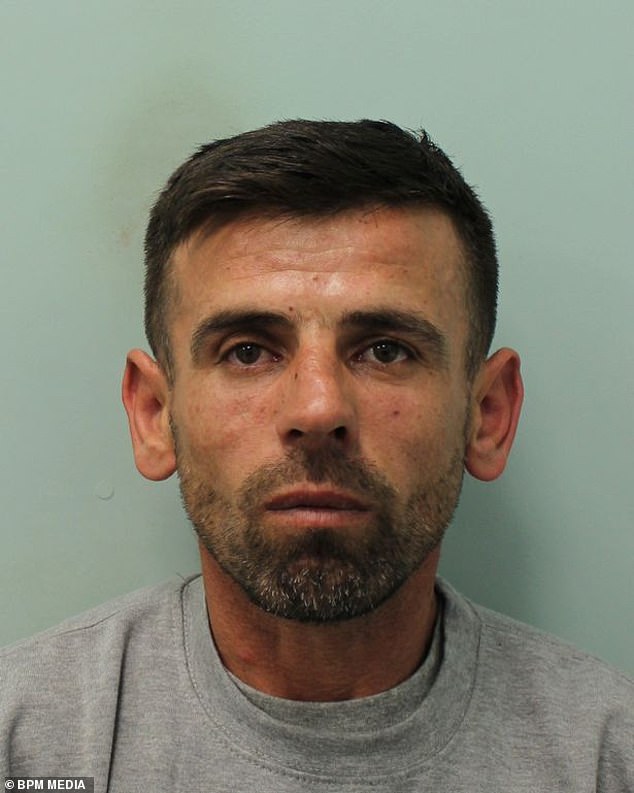 Sexual predator and Albanian national Rufat Kasamaj (pictured), 36 of High Road, Leyton, east London was today jailed for 10 and a half years for the rape of a 15-year-old girl at Westfield Stratford 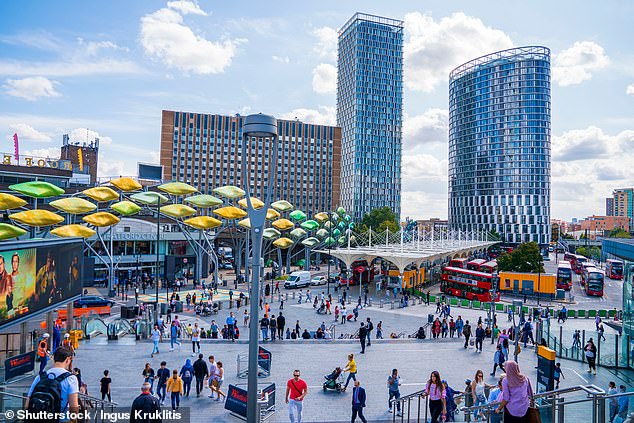 Kasamaj, who came to the UK in 2017, initially pleaded guilty to the offence in October last year at Snaresbrook Crown Court.

He was allowed to vacate that plea in March this year.

A trial date was set for July 11 but on that day Kasamaj pleaded guilty once more.

He appeared at the Old Bailey today wearing a grey wool jumper and spent the hearing looking down at the floor.

Kasamaj was jailed for ten-and-a-half years. He will serve two-thirds of that sentence in prison before an extended licence period of five years. He will be indefinitely subject to notification requirements.

A second count of sexual assault by penetration was ordered to lie on file.

The Bat and Ball bar bar nearly lost its licence as a result of the incident as she had been served alcohol despite being underage. The Metropolitan Police’s PC Gary Watson told Newham Council that there had been no challenge from bar staff despite the group looking ‘considerably less’ than 18.

The girl, now 16, sat in the well of the court between her parents and cried intermittently throughout the hearing.

Judge Mark Dennis told Kasamaj: ‘On 4 September last year you committed a truly dreadful offence subjecting your 15-year-old victim to a traumatic ordeal showing no pity or concern for her suffering in pursuit of your own sexual, violent gratification.

‘You were far from drunk.

‘In a calculated way you chose to take advantage of a lone female who was clearly in no position to protect herself from any such assault.

‘It was plainly her young age and vulnerability that you recognised and seized upon, regardless of the irrevocable harm that you would thereby inflict on her.’

The judge said the victim had shown ‘commendable fortitude’ from the outset.

‘I went through some dark places,’ she told the court.

‘I had to sleep with my bedroom light on through fear and anxiousness.

‘I had loads of sleepless nights crying myself to sleep with thoughts of suicide running through my head.’

‘This is what you had done to me,’ she told the rapist. 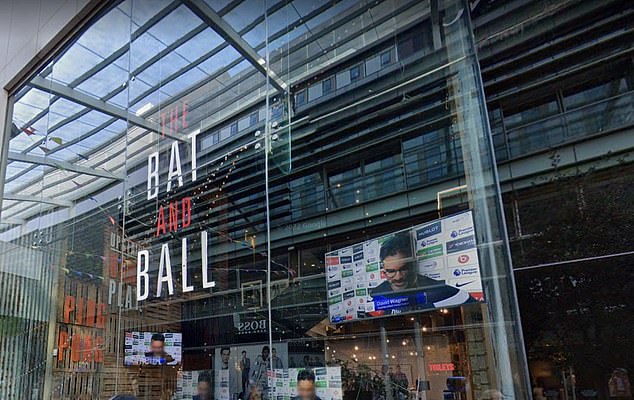 She went on to say that she was supposed to start her final year in school and do her GCSEs a few days after the incident.

‘This unfortunately was not possible. I was an emotional, physical mess.

‘I couldn’t sleep, let alone function and focus at school.

‘I have been through my darkest days as a 15-year-old girl.

‘Emotionally, this crime has torn me to pieces.’

The teenager said she wanted to end on a ‘positive note’ and told the court how she ended up sitting every one of her GCSEs, is now in college and has a part time job.

‘I’m determined that this incident will not ruin my life and make me a stronger person than I once was.’

Tim Forster, prosecuting, said: ‘This case in summary involves the vaginal rape of a heavily intoxicated and vulnerable 15-year-old girl by a stranger more than twice her age on 4 September at Westfield Shopping Centre in Stratford.

‘On that day the victim went to the shopping centre with friends.

‘She became heavily intoxicated after drinking at a bar and, after being separated from her friends, she encountered this defendant.

‘They had never met before.

‘After guiding her out of the shopping centre and eventually taking her behind a concrete seating area and flowerbed, he digitally penetrated her vagina and then did so with his penis.

‘Although she was too intoxicated to resist she made it clear to him several times that she did not want to engage in sexual activity and also told him she was under 16.

‘After raping her he simply walked away and left her where she was.’

CCTV captured Kasamaj guiding his victim through the shopping centre and made clear, from her unsteadiness, that she was ‘heavily intoxicated’.

She had twice the legal driving limit of alcohol in her blood, the court heard.

‘She told him she had lost her friends and he attempted to give her reassurance but the Crown say this was clearly a pretence,’ he added. ‘He told her he would help her get home. He did quite the opposite.

‘He started putting his hand down the back of her leggings, his finger into her vagina, she told him she was 15 but he continued doing it aggressively so that it caused her pain. All the while he was guiding her or steering her as they walked around the shopping centre.’

The court heard that Kasamaj was ‘bodily holding her throughout, even steering her past a seat when she wanted to sit down’ while walking past members of the public.

After leading her outside, he was caught on CCTV steering his victim towards an area of concrete benches to continue the assault. Despite the victim appearing ‘totally unresponsive’ members of the public continued to walk past, which attracted the attention of Kasamaj. 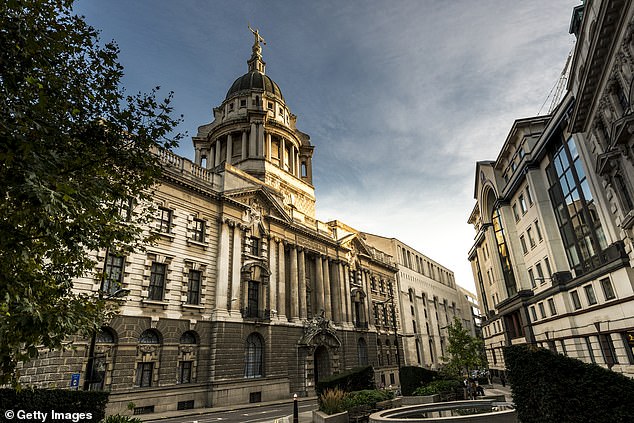 ‘In a calculated way you chose to take advantage of a lone female who was clearly in no position to protect herself from any such assault,’ Judge Mark Dennis told Kasamaj at the Old Bailey

The prosecution said because of this he ‘dragged the victim further into a flowerbed and even reached over to pick up her handbag so that he continue the more serious aspects of the sexual assault and the rape’.

They were then out of sight from the CCTV cameras for 20 minutes, during which he raped her despite her crying and begging.

The rapist then zipped up his trousers and walked away ‘with hardly a backwards glance’.

The girl emerged dazed and approached members of the public.

Mr Forster went on: ‘It was then that she encountered another stranger, this one much kinder.

‘A man called Mr Marian Petrea who was walking through the shopping centre as he left the gym.

‘She told him that she had been raped.

‘He contacted her father and even took the trouble to escort her by train back to… where she lived before making sure she was safely back in the hands of her family.’

Her first words to Mr Petrea were: ‘Please don’t hurt me.’

‘He displayed exceptional care and compassion.’

Following the rape, Kasamaj was seen returning to the scene of his crime on two occasions and at one point urinated there. Following a police investigation, he was subsequently arrested on September and claimed that he had been ‘unconscious’ during the assault and could not remember anything due to alcohol.

However, it was noted by the prosecutor that there was ‘nothing from his demeanour to suggest he was intoxicated’.

Beata Kopel, defending, said that the offending was serious but ‘not extreme’.

She added that Kasamaj had no previous convictions, pleaded guilty to the offence and wished to apologise to his victims and her family.