TUSCALOOSA, Ala. – Nearly two weeks after getting roundly booed at a World Series game in Washington D.C., President Donald J. Trump was cheered loudly at the biggest college football game of the regular season.

Less than three minutes into the game between No. 3 Alabama and No. 2 LSU, Trump and First Lady Melania Trump were shown on the big screen scoreboard at Bryant-Denny Stadium. The cheers were overwhelming for Trump, although a smattering of boos interspersed the introduction. Overall, the reaction would be considering adoring and indicative of the political tenor in a state where he’s adored.

Trump arrived at Bryant-Denny Stadium close to 2:30 p.m. on Saturday, sitting in a suite above the 35-yard line. Trump played to the home crowd in No. 2 LSU’s game at No. 3 Alabama, wearing red and blue tie that Alabama fans would identify with as close to the Crimson Tide’s colors.

Fans below him in Section JJ turned and pointed to Trump soon after he walked in. He was surrounded by suit-clad Secret Service members in the suite. Unlike his appearance at the national title game in January of 2018, Trump was not on the field pre-game for the national anthem. Alabama officials introduced him at the first break in the game, prompting the round of cheers. The cheer for Trump was similar to the one for coach Nick Saban, who led the Crimson Tide out of the tunnel at 2:38 p.m. to an adoring roar from the crowd.

The positive greeting fits with how Alabama votes politically, as Trump has a 59 percent approval in the state, compared to 37 percent of residents who do not approve. That gap of 22 percent is the highest of any state in America. 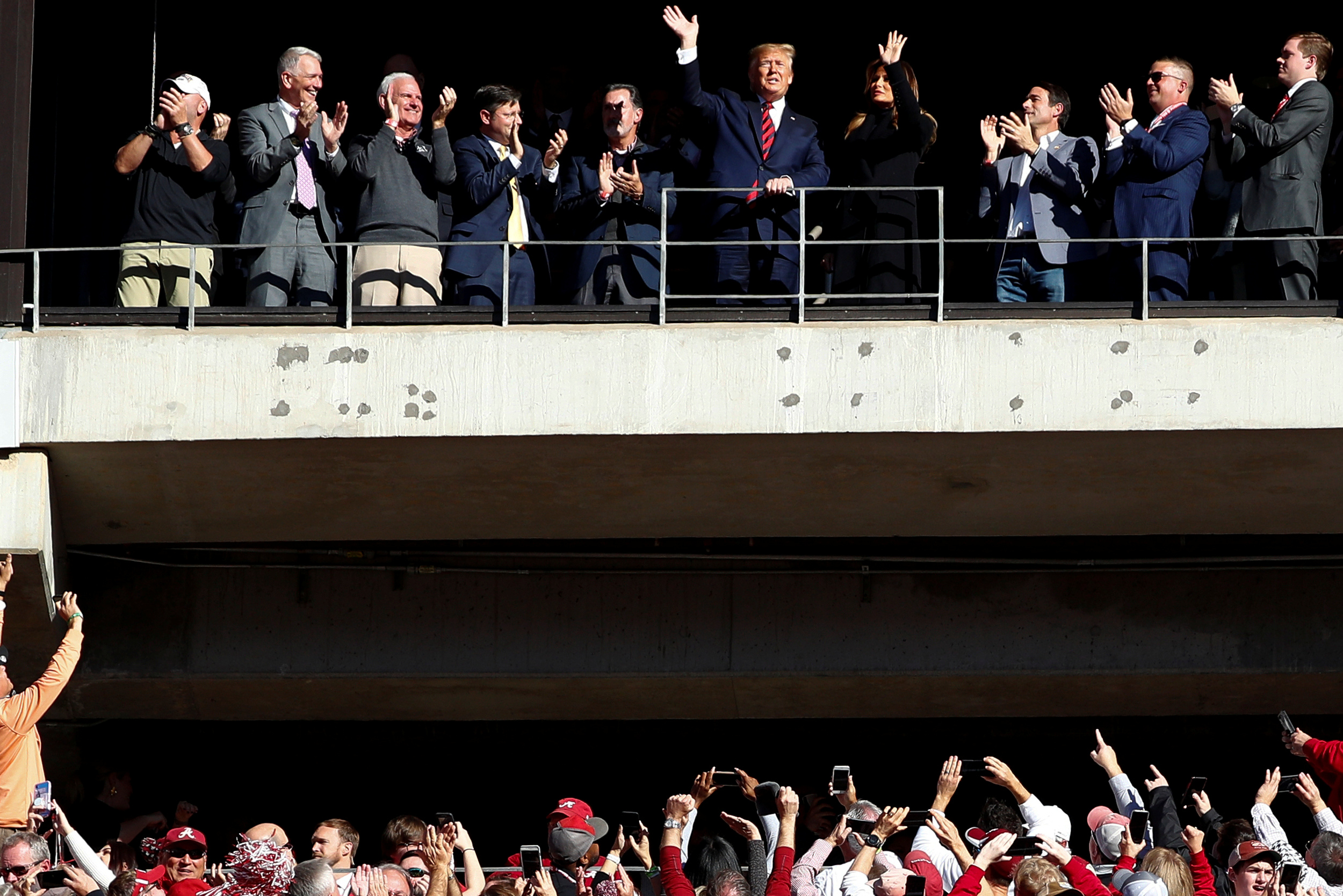 Air Force One landed about an hour before the scheduled 2:42 p.m. kickoff and Trump exited the plane at 1:55 p.m. His arrival and exit was covered on local television here, underscoring the importance for the area. As Trump headed over to the sold-out stadium of more than 101,000 fans, the crowd delighted in a sing-song version of “Sweet Home Alabama” by Lynyrd Skynyrd.

Trump’s arrival at Bryant-Denny Stadium marks his third appearance at a major sporting event in the past two weeks. He was roundly booed at Game 5 of the World Series in Washington D.C. on Oct. 29. A week ago, he attended a UFC event at Madison Square Garden and was greeted with mixed reaction from the crowd in New York City.

This marks the third college football game that Trump has attended during his time in office. He’s attended two of the past three Army-Navy games, but one of those came as the President-elect in December of 2016. He attended last year’s Army-Navy game in Philadelphia.

This is Trump’s second high-profile SEC matchup as president. He attended the Georgia-Alabama College Football Playoff title game in January of 2018, a visit more remembered for the logistical headaches than the reaction of the crowd. Georgia athletic director Greg McGarity termed the hassle the “logjam of the century” in an interview with Yahoo this week.

The trappings of a friendly greeting for the president were spotted all around the campus on Saturday morning. The crowd arrived early, wise to the logistical headaches that typically accompany presidential visits.

At Tuscaloosa National Airport, where hundreds of big-money fans flowed in for gameday, the signs of Trump’s impending arrival were everywhere. The private-plane travelers were encouraged to arrive early, as the airport was closing at 1 p.m. for Trump’s arrival. When the well-heeled booster set arrived, many of them approached the Secret Service officers and shot their hands to thank them for their service.

From the fraternity houses to the tailgate tent row lining the quad near the “ESPN GameDay” set, there were bountiful pro-Trump sign. Blue Trump 2020 signs hung from dozens of white tents, an unmistakable sign of the greeting he was to receive on a sun-kissed day where the temperature nearly reached the 60s. On the Delta Kappa Epsilon fraternity house across the street from the stadium, a giant blue TRUMP 2020 sign greeted the thousands of fans flowing to the stadium.