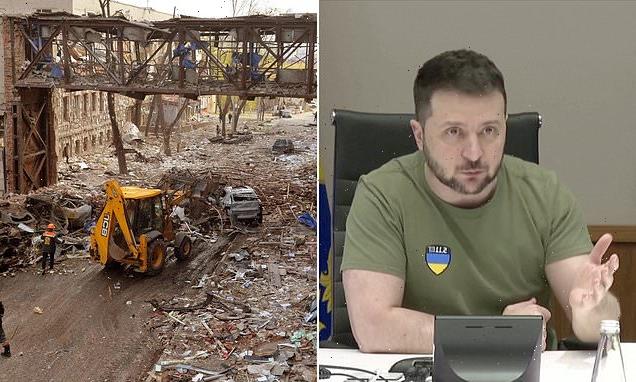 Russia is willing to use nuclear weapons to bring a catastrophic end to its invasion of Ukraine, Volodymyr Zelensky warned tonight – as he urged the world to ‘prepare’ for the worst by stocking up on anti-radiation medicine and building air raid shelters.

The comedian-turned-war time leader made the doomsday warning during an interview with national media, before sharing the clip via his Telegram channel.

He made a similar announcement on Friday, when he said it could not be ruled out that desperate Russian dictator Vladimir Putin would use tactical nukes, as his war against Ukraine continues to stall.

But the Russian strongman ramped up his offensive today, taking revenge on Ukraine for the downing of his Moskva warship by mercilessly shelling eight towns including Kyiv, Kharkiv and Lviv.

It comes after Kremlin spokesman Dmitry Peskov told CNN in a recent interview that Moscow would use a nuclear weapon on Ukraine in the case of an ‘existential threat’, while Russian military doctrine includes the ‘escalate to de-escalate’ principle of launching a small nuke to regain the initiative in war.

Zelensky said tonight: ‘We shouldn’t wait for the moment when Russia decides to use nuclear weapons… We must prepare for that.’ 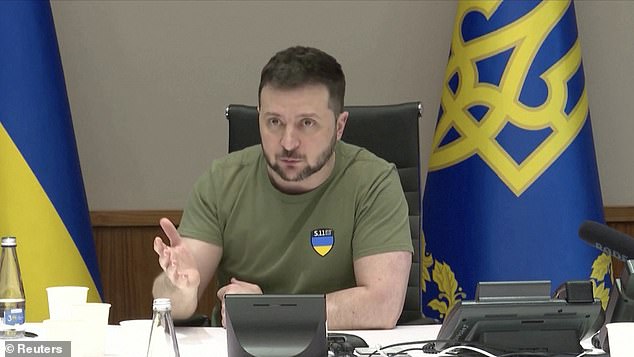 Volodymyr Zelensky made the doomsday warning during an interview with national media, before sharing the clip via his Telegram channel (pictured) 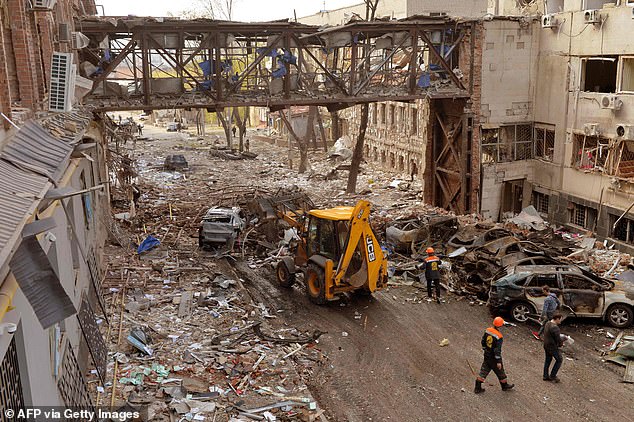 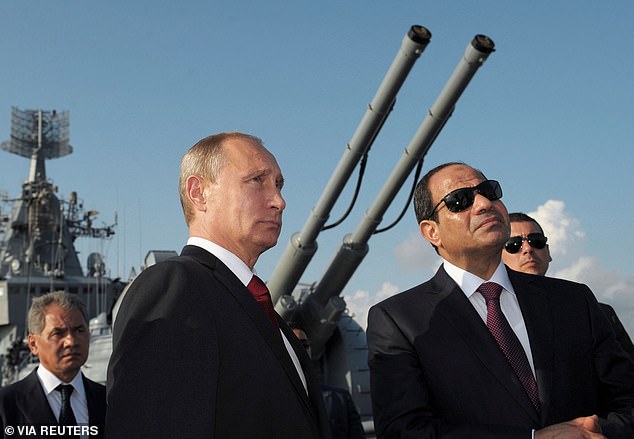 Zelensky made a similar announcement on Friday, when he said it could not be ruled out that desperate Russian dictator Vladimir Putin would use tactical nukes, as his war against Ukraine continues to stall. (Pictured: Putin on a guided tour of guided missile cruiser Moskva, which sunk this week and may have been carrying nuclear weapons) 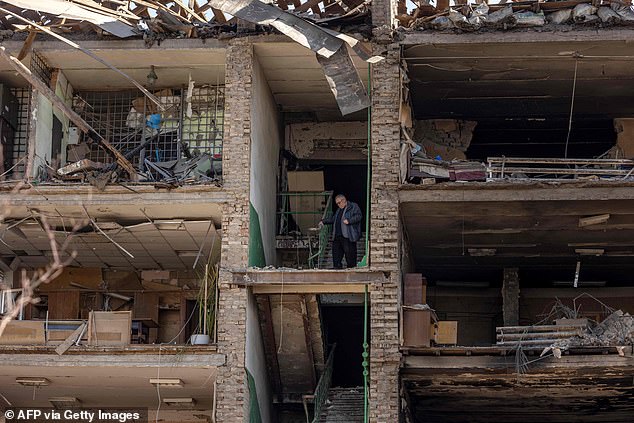 A man stands in a building with a collapsed facade at the Vizar company military-industrial complex, after the site was hit by overnight Russian strikes, in the town of Vyshneve, near Kyiv, on April 15, 2022 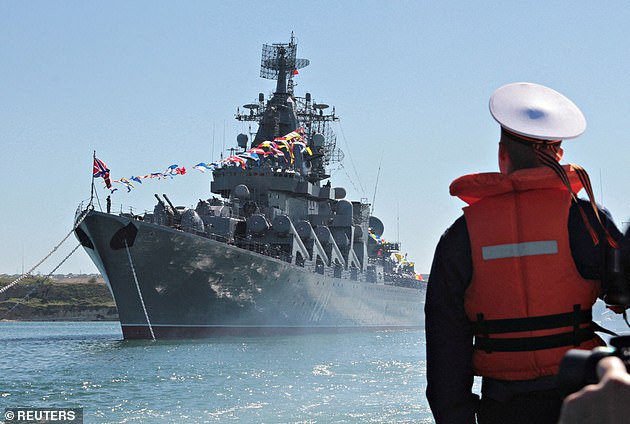 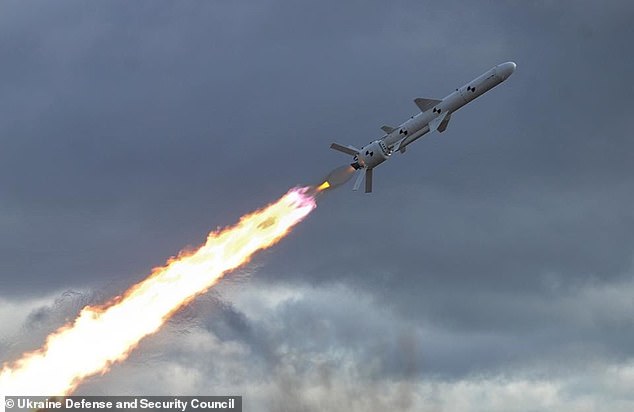 Anti-radiation medicine and air raid shelters would be needed, he said, adding that the Russians ‘can use any weapon, I’m convinced of it’.

The interview was broadcast by six Ukrainian news websites.

Zelensky had warned on Friday that the world should be worried about the threat Putin poses, echoing comments made by CIA director William Burns.

It came after the Kremlin said it had placed Russian nuclear forces on high alert shortly after the assault began on February 24, although the US says it has not seen any sign of unusual nuclear movements.

It comes after Zelensky reportedly personally asked President Biden to designate Russia as a state sponsor of terrorism – a move with substantial implications for trade and sanctions.

Biden did not commit on the subject, sources told the Washington Post.

Such a designation would lead to economic sanctions on nations that continue to do business with Russia, as well as freezing Russian assets in the US.

He spoke a day after Burns issued his warning in a speech April 14, in which he said: ‘Given the potential desperation of President Putin and the Russian leadership, given the setbacks that they’ve faced so far, militarily, none of us can take lightly the threat posed by a potential resort to tactical nuclear weapons or low-yield nuclear weapons.’

US officials have long warned that Putin could resort to increasingly reckless actions, particularly after major setbacks in its invasion, including the failure to take Kyiv or decapitate the regime, substantial troop losses and destruction of heavy armour.

The US this week said it was not able to confirm Ukrainian claims that a Russian drone had dropped a chemical weapon on the besieged city of Mariupol due to distance from the alleged event.

The Azov regiment said a ‘poisonous substance of unknown origin’ was released on Monday. 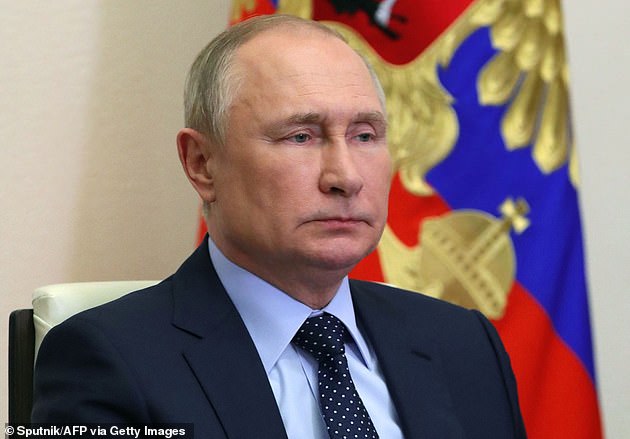 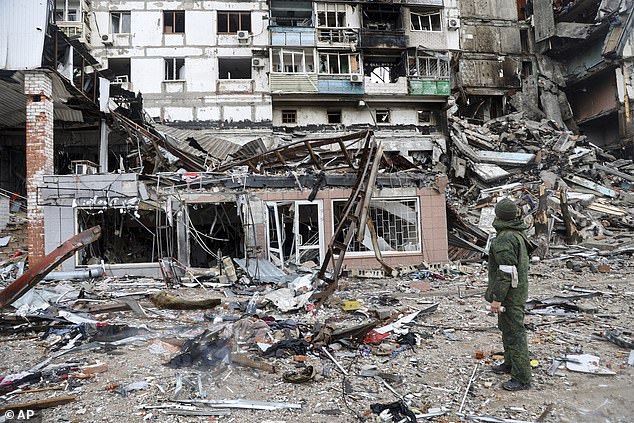 Russia warned of ‘unpredictable consequences’ after the U.S. announced the latest in a series of aid packages for Ukraine – this time including helicopters, 155 mm howitzer long-range artillery, and Switchblade drones as part of the $800 million effort.

Russia’s invasion, which began in late February, has already brought fears of a nuclear accident, after Russian troops seized and then later abandoned the Chernobyl nuclear plant after holding Ukrainian plant workers hostage for weeks.

And there are concerns Russia’s Black Sea flagship, the Moskva, could have been carrying nuclear warheads when it was sunk this week.

The Soviet-era guided missile cruiser, sank near the port of Sevastopol on Thursday after Ukraine said it hit the ship with two cruise missiles. Moscow claims it was due to a fire on board, and says it sank in part due to ‘stormy sea conditions.’

Pentagon officials said Friday the US assessment is that Ukrainian forces struck the ship with two Neptune missiles. 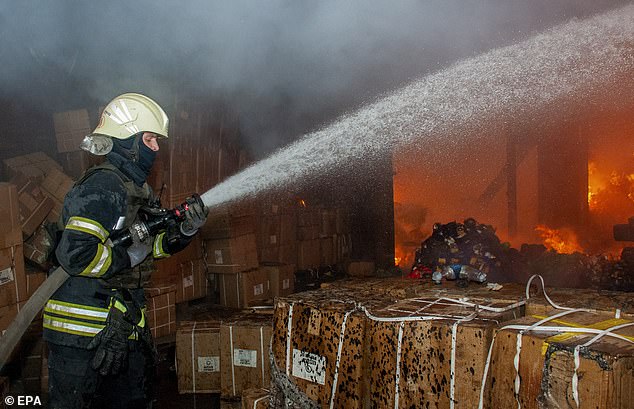 Ukrainian rescuers put out a fire on a storehouse after shelling in Kharkiv, Ukraine, 13 April 2022. The city of Kharkiv, Ukraine’s second-largest city, has witnessed repeated airstrikes from Russian forces including satellite cities 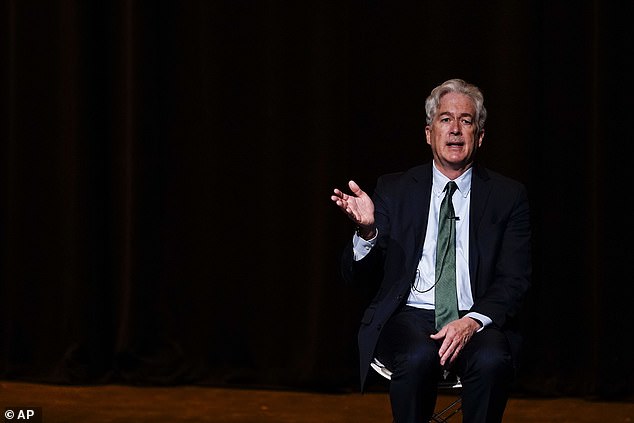 ‘Given the potential desperation of President Putin and the Russian leadership, given the setbacks that they’ve faced so far, militarily, none of us can take lightly the threat posed by a potential resort to tactical nuclear weapons or low-yield nuclear weapons,’ said Central Intelligence Agency Director William Burns

Russia then launched a series of cruise missile strikes on Ukraine overnight in revenge for the sinking – saying it struck a factory near Kyiv that made the weapons used against Moskva.

The strikes illustrated how Moscow can still launch rocket attacks on Ukraine even after withdrawing its forces that had sought to encircle Kyiv.

Mykhailo Samus, director of a Lviv-based military think-tank; Andriy Klymenko, editor of Black Sea News; and Ukrainian newspaper Defense Express all warned that the Moskva could have been carrying two nuclear warheads designed to be fitted to its P-1000 ‘carrier killer’ missiles.

If true, the loss of the warheads into the Black Sea could spark a ‘Broken Arrow’ incident – American military slang for potentially lethal accidents involving nuclear weapons.

‘On board the Moskva could be nuclear warheads – two units,’ Samus said, while Klymenko called on other Black Sea nations – Turkey, Romania, Georgia, and Bulgaria – to insist on an explanation.

‘Where are these warheads? Where were they when the ammunition exploded,’ he asked.