‘I just want my body to find peace and comfort’: Prince Albert’s daughter Jazmin Grace Grimaldi speaks out after being hospitalized for worsening COVID-19 symptoms

The daughter of Prince Albert of Monaco, Jazmin Grace Grimaldi, who was hospitalized over the weekend with worsening Covid-19 symptoms, has spoken out after being discharged.

The 28-year-old California native first announced she had contracted the virus in early July, saying her symptoms included ‘debilitating’ migraines and a fever that lasted for three or four days.

But after he symptoms worsened last week, she was admitted to hospital on Friday, spending five days there before being released to continue her recovery at home.

‘Doctors are still learning and confessed they have seen other cases similar to mine. I am beyond frustrated and just want my body to find peace and comfort,’ Grimaldi said in a lengthy Instagram post yesterday. 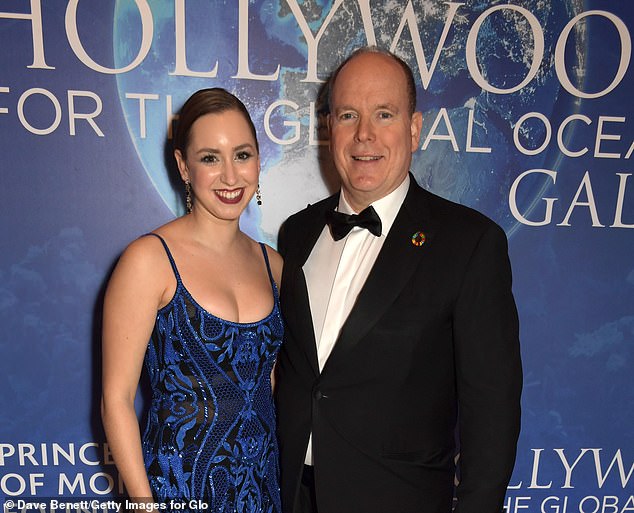 Jazmin Grace Grimaldi, pictured left, who is the daughter of Prince Albert of Monaco, right, has been suffering with Covid-19 since being diagnosed with the virus in early July. On Friday, she said the symptoms had worsened, and posed an message to her Instagram followers that she was hospitalized as a result

‘The pain is so uncomfortable and debilitating and there is not much to do but to rest, and ice packs for some relief. I am sharing my story so that all of you can be aware and maybe share in similar symptoms.

‘The COVID virus is so strong and mysterious,’ she added. ‘I know we are all over talking about COVID, hearing about COVID, and living in fear or disbelief of this virus.

‘Believe me, I am more than ready to be done myself but unfortunately, I have no choice. Listen to your body!’ 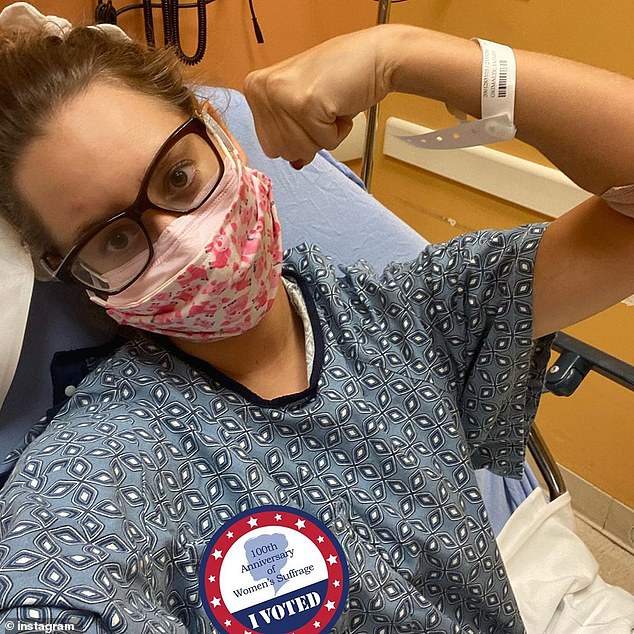 In a lengthy message on Instagram, Grimaldi told her followers that she had experienced a new range of symptoms, including ‘a chickenpox-like rash…uncomfortable body aches with longer severe pain by my lungs/rib cage, flashes of fever, and debilitating migraines.’ Her message also celebrated 100 years since the 19th amendment was passed 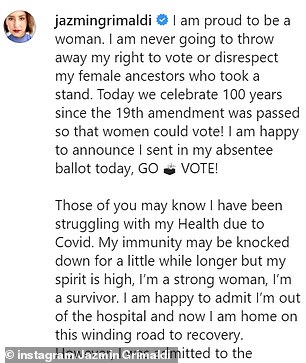 In a video posted on Friday, Grimaldi told her followers that she had experienced a new range of symptoms, including ‘a chickenpox-like rash…uncomfortable body aches with longer severe pain by my lungs/rib cage, flashes of fever, and debilitating migraines.’ 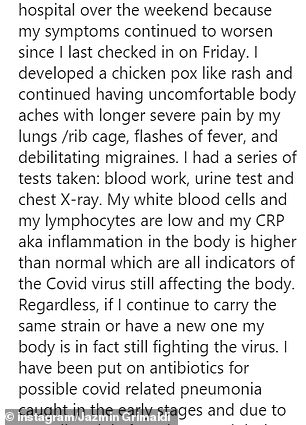 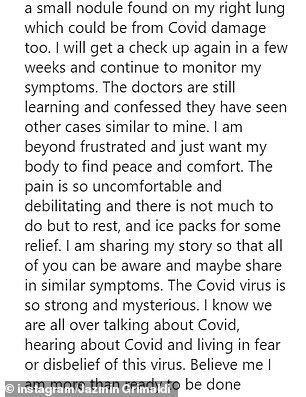 Under the picture of herself in hospital, Grimaldi posted a message to her followers – first celebrating the 100th anniversary of the 19th amendment, and also to give an update on her battle with Covid-19

She added that a series of tests of Friday found she had low white blood cell and lymphocyte counts, as well as other indicators that the virus was active, leading to the decision to hospitalize her.

‘Those of you may know I have been struggling with my health due to COVID. My immunity may be knocked down for a little while longer but my spirit is high, I’m a strong woman, I’m a survivor,’ her post said.

‘I am happy to admit I’m out of the hospital and now I am home on this winding road to recovery. However, I was admitted to the hospital over the weekend because my symptoms continued to worsen since I last checked in on Friday.’

She went on to say that doctors were unsure whether her condition is becuase of the earlier strain detected, or whether she had contracted a new one, adding that she had been ‘put on antibiotics for possible COVID-related pneumonia’ after a small nodule was found on her right lung – which could be damage from the virus.

Grimaldi, who is Prince Albert’s daughter from his short relationship with American Tamara Jean Rotolo, posted the update on her health along with a message celebrating 100 years since the 19th amendment was passed, giving women the right to vote in the U.S.

‘I am proud to be a woman. I am never going to throw away my right to vote or disrespect my female ancestors who took a stand,’ she wrote.

‘Today we celebrate 100 years since the 19th amendment was passed so that women could vote! I am happy to announce I sent in my absentee ballot today, GO VOTE!’

Four weeks ago, Grimaldi posted a message on her Instagram saying that she was ‘so thankful that I am starting to finally feel like myself today after almost three weeks since I first felt Covid symptoms,’ saying that the symptoms were coming-and-going.

‘I do in fact have Covid symptoms that continue to linger and pop up on and off again,’ she wrote.

In early March, her father Prince Albert, who first publicly acknowledged Jazmin’s paternity in 2006, became the first head of state to test positive for COVID-19.

The 62-year old sovereign told PEOPLE at the time that he experienced mild flu-like symptoms.

‘I’ve a slight fever, not really that bad. A little bit of a cough. I’d a runny nose the first few days, that was the first sign. I’ve felt a little stuffed up but that’s it,’ he said. After he spent several weeks self-isolating in the palace, the royal returned to his family.

ARE THERE LONG-TERM SYMPTOMS OF COVID-19?

Covid-19 is described as a short-term illness caused by infection with the novel SARS-CoV-2 coronavirus. Public health officials tend to say people will recover within two weeks or so.

However it’s become increasingly clear that this is not the case for everyone, and that the two-week period is only the ‘acute illness’ phase.

Data from the COVID Symptom Study app, by King’s College London and health company Zoe, suggests one in ten people may still have symptoms after three weeks, and some may suffer for months.

For those with more severe disease, Italian researchers who tracked 143 people who had been hospitalised with the disease found almost 90 per cent still had symptoms including fatigue two months after first falling unwell.

The most common complaints were fatigue, a shortness of breath and joint pain – all of which were reported during their battle with the illness.

Another study in Italy showed one in ten people who lose their sense of taste and smell with the coronavirus – now recognised as a key sign of the infection – may not get it back within a month.

The study, published in the journal JAMA Otolaryngology – Head and Neck Surgery, involved 187 Italians who had the virus but who were not ill enough to be admitted to hospital.

The UK’s Chief Medical Officer Professor Chris Whitty has said the longer term impacts of Covid-19 on health ‘may be significant’.

Support groups such as Long Covid have popped up online for those who ‘have suspected Covid-19 and your experience doesn’t follow the textbook symptoms or recovery time’.