Taking over the reigns: Prince Andrew looks rather ill at ease during first duty as Colonel of the Grenadier Guards after taking riding lessons to brush up on his technique

As someone who, if truth be told, isn’t all that keen on horses, he had the misfortune to be born into a family utterly obsessed with them.

So with a new military title to boast of, and one which will require him to appear on horseback at Trooping the Colour next month, Prince Andrew has been frantically brushing up on his technique.

This week the Queen’s son, who has been seen on horseback only a handful of times in his 58 years, was just about confident enough to be put through his paces on the streets of London in preparation for his starring role.

While he didn’t exactly cut the most dashing figure ever seen on a saddle, Andrew, dressed in the black coat and peaked cap of his new role as Colonel of the Grenadier Guards, was able to ride – albeit slightly wobbily – through the capital with just one hand on the reins. 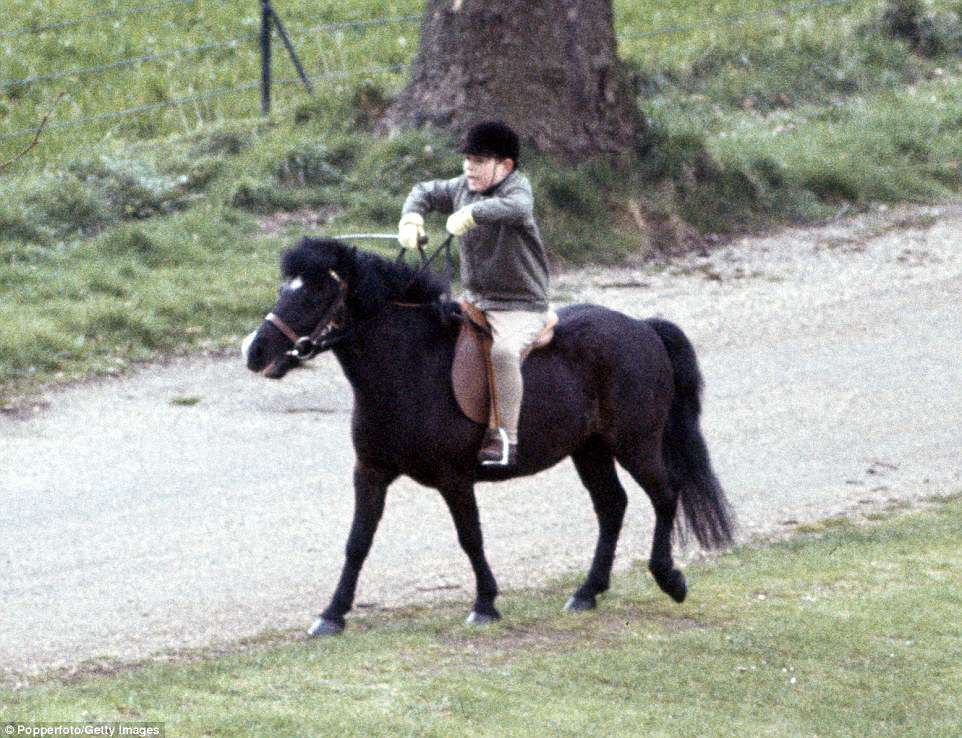 Prince Andrew riding his Shetland pony Valkyrie in Windsor Park on 1st April 1967. This image is one of a series taken by Ray Bellisario who was credited with being the ‘original paparazzo’ and someone who frequently upset the Royal Family with his informal and often unwelcome style of photography

Few of the hundreds of tourists who passed him even realised that it was the seventh in line to the throne holding the fort at the back of a long line of riders.

Andrew took over as Colonel of the Grenadier Guards from Prince Philip in December following his father’s retirement from public life.

He has since been having regular lessons to prepare him to appear on horseback for the first time at Trooping the Colour on June 9.

Although a naval officer by trade, but one with such a love of foreign jaunts and private jet that he has been dubbed Air Miles Andy, he has been seen brushing up on his skills in the grounds of Windsor Castle, accompanied by a female instructor. 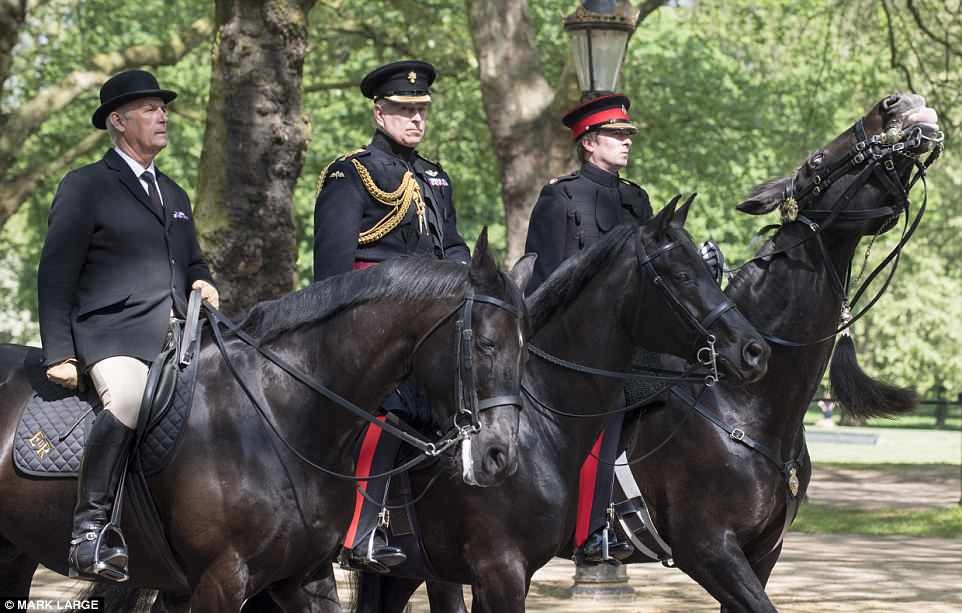 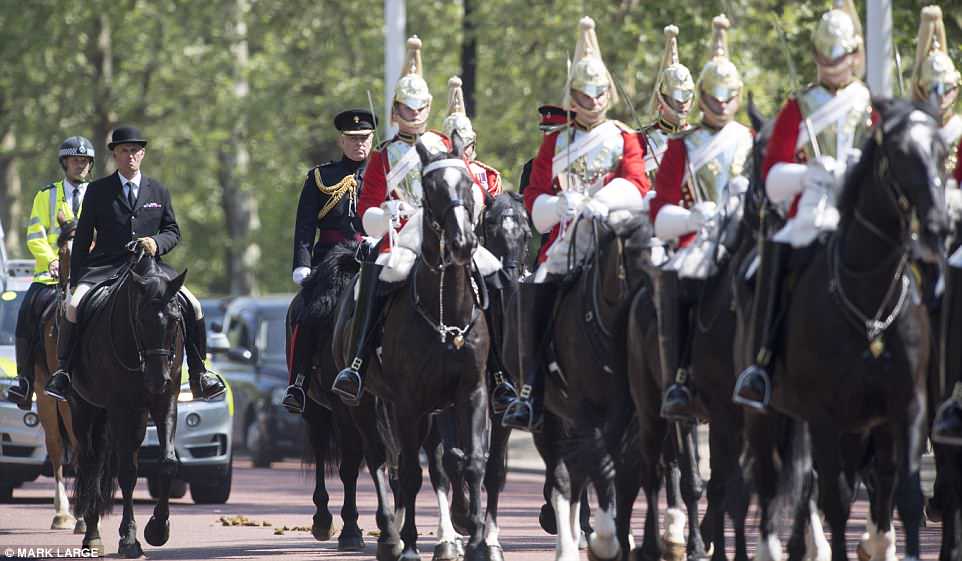 It is believed Andrew will be required to don the heavy bearskin hat that is worn by the Grenadier Guards on ceremonial duty in recognition of their victory at the Battle of Waterloo in 1815, although he was not seen in it earlier this week

A source said: ‘The prince never really been keen on riding, unlike the rest of his family. He much prefers golf but now he has taken over Duke of Edinburgh’s responsibilities he will be appearing on horseback at this year’s Trooping the Colour.’

Prince Philip, who had been Colonel of the Grenadier Guards since 1975, used to ride on horseback at the Queen’s annual birthday parade, alongside other members of the Royal Family who are the colonels of regiments in the Household Division.

This year’s event will see Prince Charles, Princess Anne and the Duke of Cambridge all take to their steeds.

It is believed Andrew will be required to don the heavy bearskin hat that is worn by the Grenadier Guards on ceremonial duty in recognition of their victory at the Battle of Waterloo in 1815, although he was not seen in it earlier this week.

Andrew left the Royal Navy in 2001 but holds a number of military service appointments. 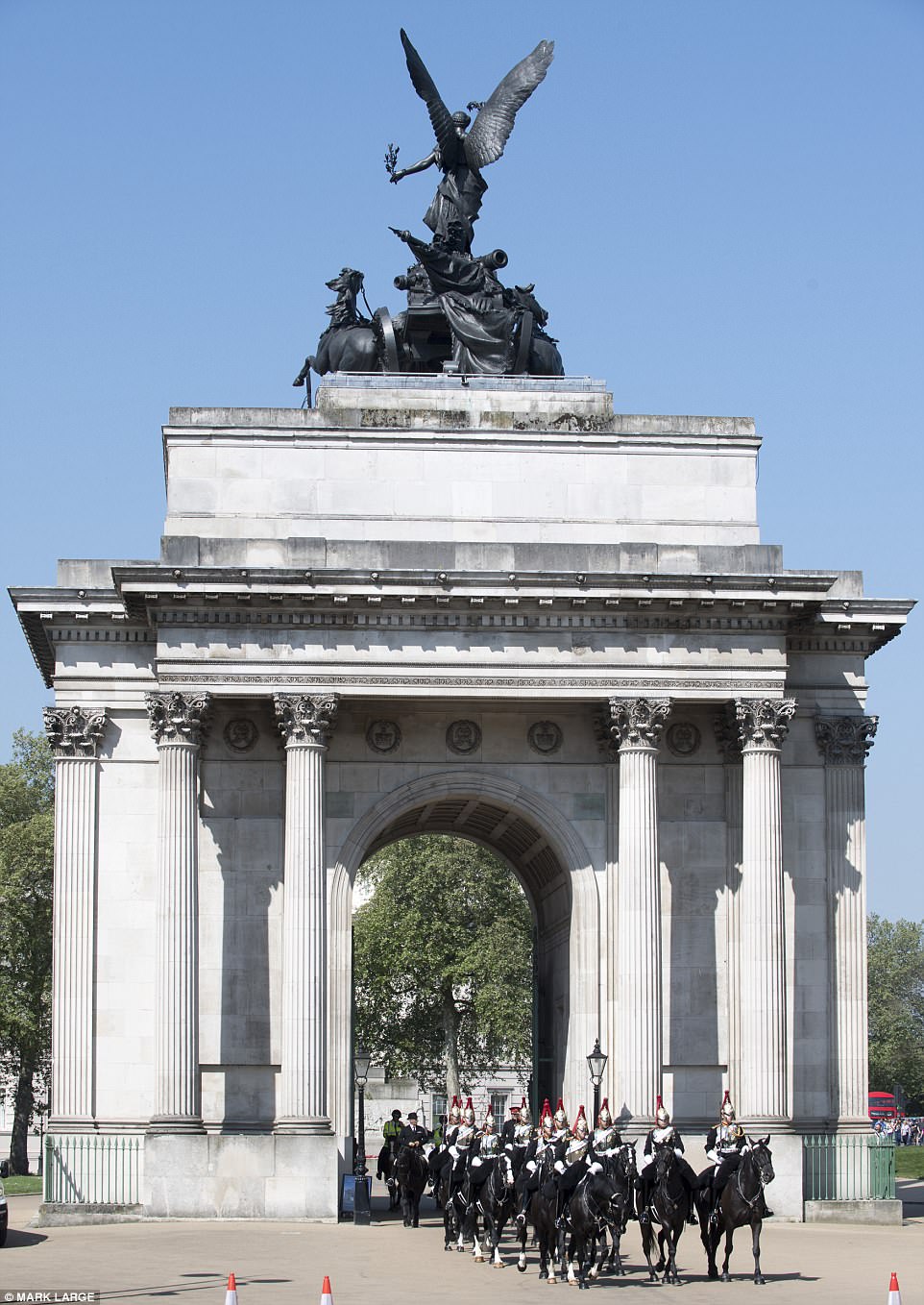