SEBASTIAN SHAKESPEARE: Prince Charles’s friend says Meghan Markle’s wedding dress ‘was made of concrete’, describes her father as a ‘huge lump’ and says the royals don’t know how to deal with her ‘frightfully common’ family 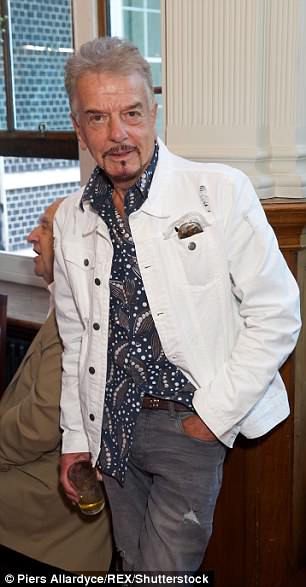 Nicky Haslam, 78, who is a good friend of the royals, launched an astonishing verbal assault on the Duchess of Sussex’s family whom he deems ‘common’

After Kensington Palace confirmed that Prince Harry had started courting Suits actress Meghan Markle, the Prince issued an impassioned statement condemning the Press for its so-called ‘abuse’ of his girlfriend who is now is wife.

Perhaps Harry should have extended the warning to his father Prince Charles’s friends, too.

Last night, Old Etonian interior designer Nicky Haslam, 78, who is a good friend of the royals, launched an astonishing verbal assault on the Duchess of Sussex’s family whom he deems ‘common’ as well as making disobliging remarks about her wedding dress.

Born to one of Queen Victoria’s goddaughters, Haslam socialised with Princess Diana, has worked for Prince Charles, and once sang in front of the Queen.

The designer believes the absence of Meghan’s siblings and father Thomas Markle from the royal nuptials was a blessing in disguise. Markle senior cancelled his appearance because of a heart operation after selling staged images of himself a week before the wedding.

‘They’re frightfully common,’ says Haslam. ‘It would have been awful if that huge lump [Meghan’s father] had been there.

‘The royals probably don’t quite know how to deal with them.’ 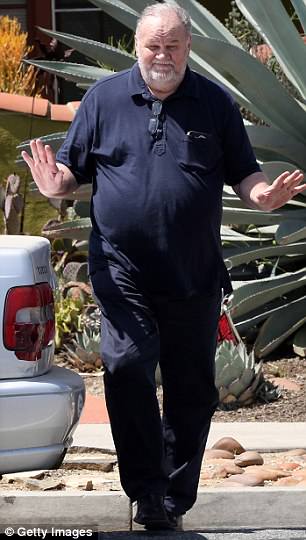 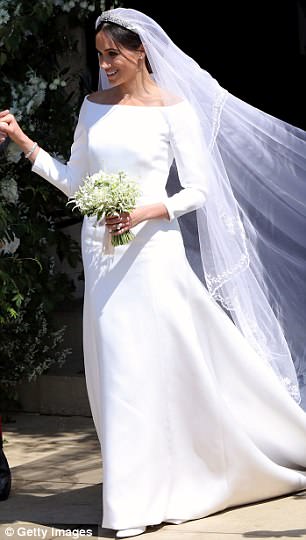 Thomas Markle cancelled his appearance because of a heart operation after selling staged images of himself a week before the wedding. Right, Meghan Markle on her wedding day

Haslam makes an exception for Meghan’s mother, Doria Ragland. ‘One person who wasn’t common was her mother,’ he concedes.

‘I didn’t very much like her dress — it didn’t fit, among other things,’ he adds. ‘It should have been made of thinner stuff, it seemed to be made of concrete.’

Might Haslam,who is also a cabaret singer, be upset that he wasn’t booked to perform at the royal wedding?

Harry and Meghan still have a chance to see him — as he’s singing tonight at the Pheasantry on Chelsea’s King’s Road at 8.30pm.

Fashion-conscious hotel heiress Nicky Hilton was upstaged at the Dior Couture show in Paris this week — not by a supermodel, but by a Yorkshire Terrier.

The 34-year-old is usually the star attraction at parties in New York, where she lives with her husband, British banking scion James Rothschild, but managed to take her encounter with the pooch, Little Lola Sunshine, in her stilettoed stride. 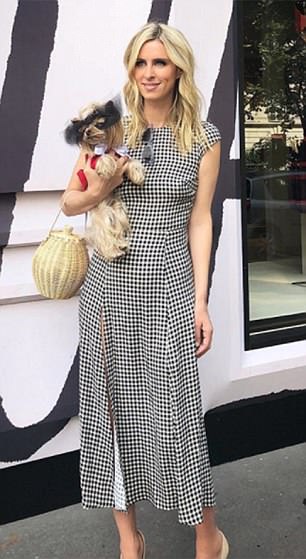 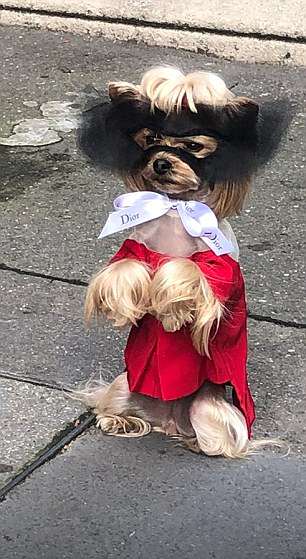 Fashion-conscious hotel heiress Nicky Hilton was upstaged at the Dior Couture show in Paris this week — not by a supermodel, but by a Yorkshire Terrier

‘Only in Paris do you meet a dog in a canine couture lace mask,’ she joked online. The dog also sported a red ‘off-the-shoulder’ dress and a white ribbon around her neck.

Nicky looked frankly dowdy by comparison, in a black-and-white gingham dress which she teamed with a £246 Ulla Johnson basket bag.

Stephanie Flanders is famed for her romantic liaisons with Labour has-beens Ed Miliband and Ed Balls.

Having spent five years as the BBC’s economics editor before joining Bloomberg last year, she tells me that she wishes she’d waited before jumping ship if only to succeed David Dimbleby on Question Time.

‘It’s probably the only job I’d have stayed at the BBC for,’ she says. ‘I think I’d be brilliant — feel free to tell them.’

No danger of Stephanie hiding her light under a bushel.

Why Bake Off’s Nadiya is talking tripes with her kids

Bake Off winner Nadiya Hussain has succeeded where successive generations of mothers have failed: she has converted her children to tripe.

‘They love tripe and chicken livers — I grill them and put them on a salad, or they’ll eat them with rice piled on top,’ says the Luton-born mother-of-three. While Hussain, 33, has previously admitted that overnight success took a toll on her marital life, it seems her seven-year-old daughter Maryam has still to forgive her.

‘I won Bake Off before my daughter turned four and now she hates the show and says, ‘I’m never watching Bake Off again, because that took Mummy away’.’

He made his name as womanising smoothie Don Draper in U.S. drama Mad Men, but Jon Hamm hankers to appear on British TV. ‘I’d love to be one of the people on Gogglebox,’ he admits. ‘But I really like English game shows. There’s a chunk of time — 5pm to 7pm — when all the game shows come on. And it’s like, ‘This is my time!’ ‘The dumber the better.’

Out on the town, Green’s girl one month after baby 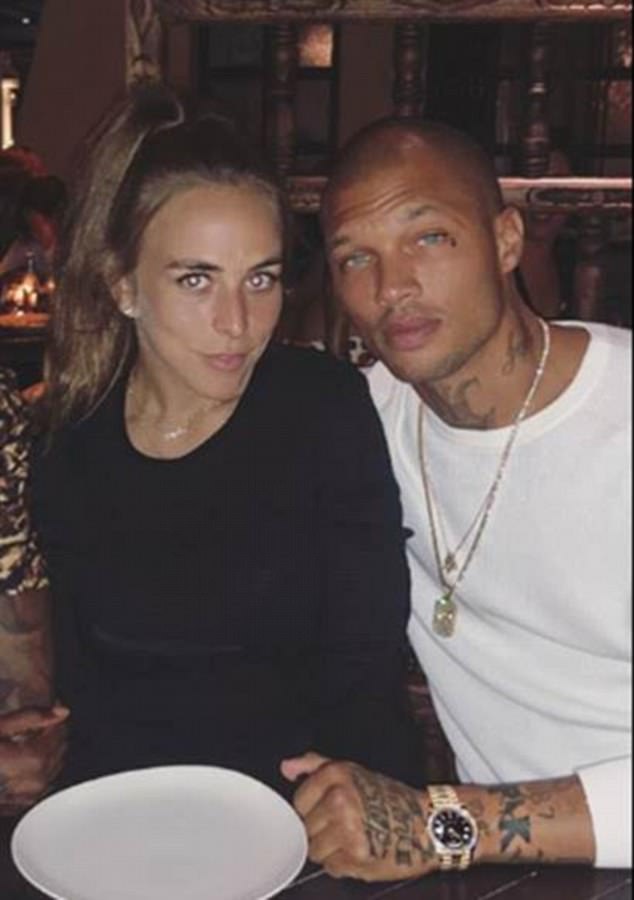 Chloe Green and Jeremy Meeks dine out in Monaco, a month after the birth of their first child

The 27-year-old made her first public appearance with her boyfriend, ‘hot felon’ Jeremy Meeks, one month after the birth of their first child, a son named Jayden.

Dining at a restaurant in Monaco with friends including Formula 1 champion Lewis Hamilton and pop star Rita Ora, Chloe covered up her post-partum figure in a black jumper, while Meeks, 34, who has two sons by other women, showed off his tattooed arms and neck in a white top.

U.S.-based comedy star James Corden, who presents the Late Late Show, clearly cannot wait to return to the grandeur of Blighty. ‘When anyone says to me, ‘I’m going to Britain’, I always say: ‘Look up!’ because you will always be rewarded. In Los Angeles, there’s nothing built that’s over 11 years old.’ 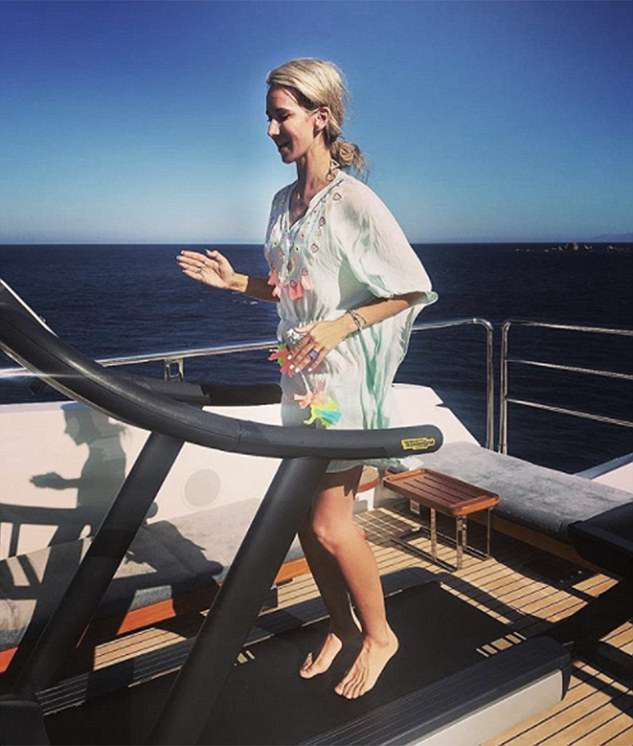 Staying slim while on endless holidays is no mean feat, but for the Marquess of Bristol’s 41-year-old sister Lady Victoria Hervey it’s easy.

On a break in Mykonos, the blonde socialite works out barefoot on a treadmill which is strategically placed on the poop deck of a superyacht so that she can top up her golden tan.

Lady Victoria admits she never gains weight. ‘People often ask if I diet, but I don’t, I eat everything. I love food,’ she tells me. ‘I never worry about putting on weight. I think it must be genetics.’

With violence soaring, Kinks rock star Sir Ray Davies suggests schools should teach pupils how to cope with the trauma of being a crime victim.

Davies was shot in the leg in 2004 while chasing two muggers in New Orleans and now says: ‘I should’ve just screamed and given them my wallet. No one trains you how to be a mugging victim, although London schools might have to start incorporating it into the curriculum.’