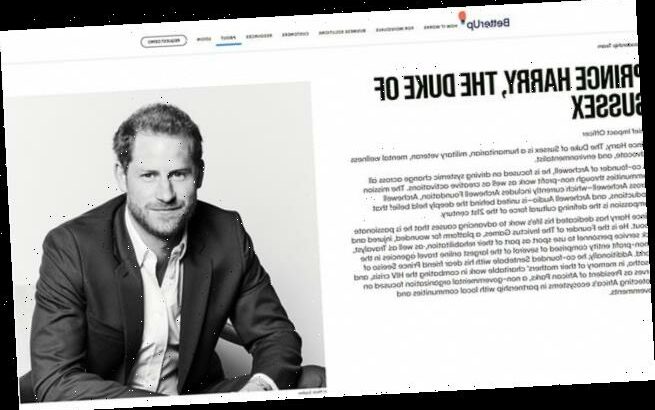 Prince Harry gets a real job: Duke to become ‘Chief Impact Officer’ for San Francisco-based mental health coaching start-up Better Up that works with US giants from Hilton to Chevron

Prince Harry has got his first job in business as an executive at a Silicon Valley start-up that claims to be worth $1.73billion – where he will promote an app used by corporate giants including Hilton, Facebook and oil giant Chevron to improve the mental health of their staff.

The Duke of Sussex was unveiled as the Chief Impact Officer at BetterUp, whose CEO Alexi Robichaux has declined to say how much the royal will be paid, but similar roles at other California firms would command six or seven-figure salaries.

Harry, who has served in the British Army but has no corporate experience, will not manage any employees but will be expected to appear at special company events and spend time at the company’s San Francisco for meetings once Covid restrictions are lifted.

The prince, who says he has been using BetterUp’s app since January, began talks with them about a role last Autumn after being introduced to USC graduate Mr Robichaux ‘through a mutual friend’.

BetterUp employs therapists and executive coaches on contracts, who are paired with clients to provide mental health coaching by video link through the app. Most of its clients are in the United States, but it does have executive coaches employed in the UK.

The tech firm that works with corporate giants including Facebook, Google, Snap Inc, NASA, Hilton and Warner Brothers. There will be some raised eyebrows because Harry has spoken widely on the need to protect the environment, but BetterUp has also worked with oil giant Chevron.

Explaining why he has taken the job, Harry told the Wall Street Journal in a suitably corporate response: ‘I intend to help create impact in people’s lives. Proactive coaching provides endless possibilities for personal development, increased awareness, and an all-round better life’.

He added: ‘This is about acknowledging that it isn’t so much what is wrong with us, but more about what has happened to us over the course of life. Often because of societal barriers, financial difficulty, or stigma, too many people aren’t able to focus on their mental health until they’re forced to. I want us to move away from the idea that you have to feel broken before reaching out for help’.

The company’s boss Alexi Robichaux says that Harry is an ideal fit for this latest ‘meaty role’. The business, founded in 2013, sells its app and services to big businesses with more than 10,000 employees, who can tap into a network of 2,000-plus life coaches whose aim is to help improve their happiness at work and at home, the company says.

Facebook and LinkedIn are paying for expensive on-the-clock ‘coaching’, where their workers can hold virtual meets with therapists to help them cope better with stress and set goals to achieve in their jobs. 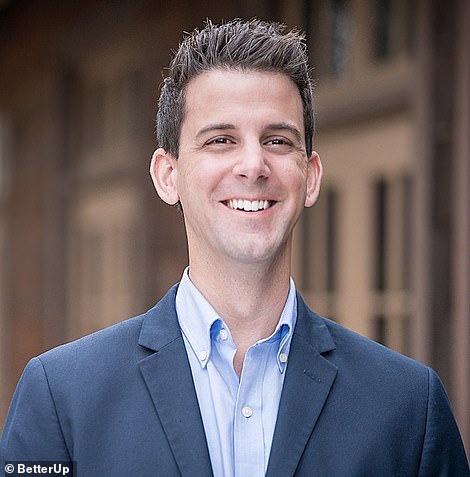 The Duke of Sussex was unveiled on Tuesday morning as the chief impact officer at BetterUp with this corporate black and white photograph of Harry released at the same time. He was introduced to CEO Alexi Robichaux (right) through a mutual friend. He has refused to say how much Harry will be paid 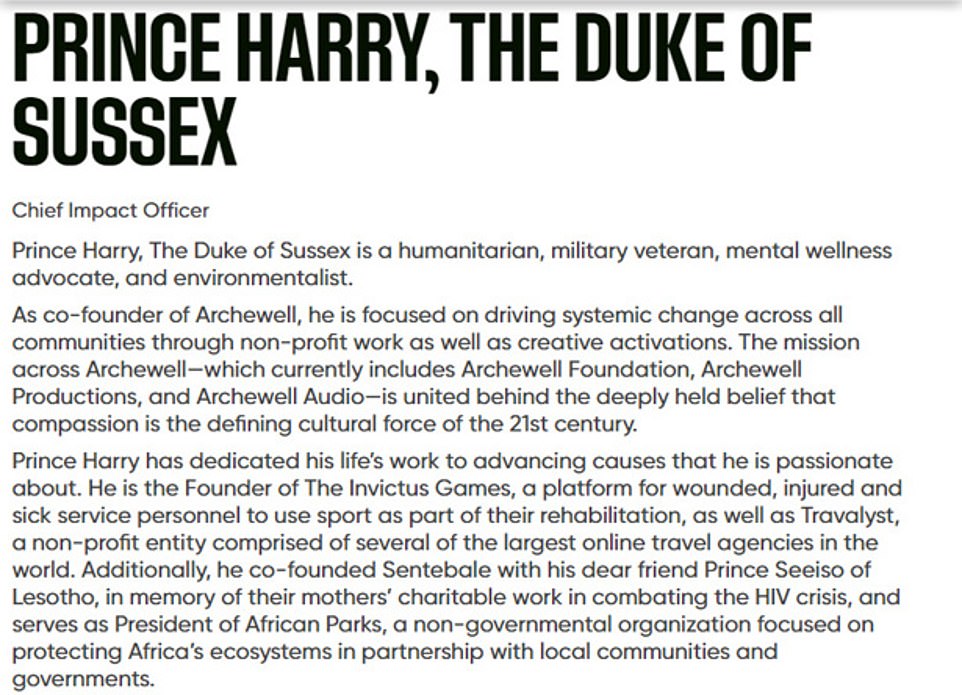 A statement on the company’s website said: ‘Prince Harry, The Duke of Sussex is a humanitarian, military veteran, mental wellness advocate, and environmentalist’

A statement on the company’s website said: ‘Prince Harry, The Duke of Sussex is a humanitarian, military veteran, mental wellness advocate, and environmentalist.

‘As co-founder of Archewell, he is focused on driving systemic change across all communities through non-profit work as well as creative activations.

‘The mission across Archewell—which currently includes Archewell Foundation, Archewell Productions, and Archewell Audio—is united behind the deeply held belief that compassion is the defining cultural force of the 21st century.

‘Prince Harry has dedicated his life’s work to advancing causes that he is passionate about.

‘He is the Founder of The Invictus Games, a platform for wounded, injured and sick service personnel to use sport as part of their rehabilitation, as well as Travalyst, a non-profit entity comprised of several of the largest online travel agencies in the world.

‘Additionally, he co-founded Sentebale with his dear friend Prince Seeiso of Lesotho, in memory of their mothers’ charitable work in combating the HIV crisis, and serves as President of African Parks, a non-governmental organization focused on protecting Africa’s ecosystems in partnership with local communities and governments.’

The role will see the Duke weigh in on product strategy, charitable contributions and speak about mental health.

He will not be in charge of other workers or handle reports directly, but will go to San Francisco to work when Covid is over.

His latest title is rare, with few corporate companies having such positions. It is more often used at nonprofit firms.

Since it was founded seven years ago, it has built a network of 2,000 coaches and has 270 other employees. The company says it is worth $1.7billion because of it has 100,000 corporate members.

It says that that need for more executive coaching, and virtual sessions because of lockdown, has further improved its position in the market. 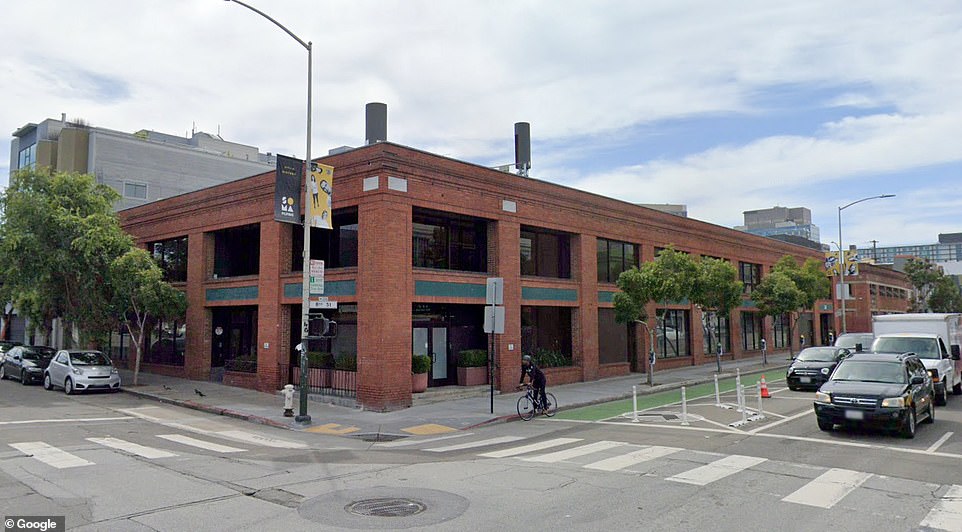 Harry, who has served in the British Army but has no corporate experience, will not manage any employees but will be expected to appear at special company events and spend time at the company’s San Francisco for meetings once Covid restrictions are lifted (pictured)

The businessman would not be drawn on how much the Duke will earn and did not reveal details of his employment.

The new job came just over a fortnight after the Sussexes’ bombshell interview with Oprah, where Harry said he was persuaded to sign multi-million dollar deals with Netflix and Spotify when he was ‘literally cut off financially’ from the Royal Family.

The Duke of Sussex told Oprah Winfrey that shortly after he and the duchess announced their wish to step back as senior members of the Royal family and spend time overseas, he stopped receiving income from palace.

Harry added that, had it not been for money left for him by his late mother, Princess Diana, he would have been unable to pay for security to protect his family.

The Duke and Duchess of Sussex raised eyebrows when they announced in September a deal worth an estimated £75million to make programmes for streaming giant Netflix, despite citing a lack of privacy as one reason for quitting the Royal Family.

In December, the couple announced a second high-profile partnership – this time a multi-year deal with global audio streaming behemoth Spotify.

The deal, which experts estimated could be worth around £18million, will see Harry and Meghan make and host a number of podcasts for Spotify’s 320million monthly active users on a variety of subjects to help listeners ‘connect to one another without distraction.’

Asked about the lucrative partnerships during the interview, Harry told Miss Winfrey that they were ‘never part of the plan’ but instead were suggested by a ‘friend’ when they feared financial issues.

‘My family literally cut me off financially, and I had to afford, afford security, for us,’ he said.

‘But I’ve got what my mum left me, and, without that, we would not have been able to do this.’

He added of the issues he has faced in recent years: ‘I think she saw it coming.’

Prior to stepping back from royal duties in December 2019, Prince Harry received the vast majority of his income from the Duchy of Cornwall, a portfolio of property and financial investments managed by his father, Prince Charles. For the financial year 2018/19 this was more than £5million. It is believed Prince Charles, who initially continued to fund the couple, withdrew financial support from the Duchy last year when it became clear their move to the US was permanent.

About 5 per cent of the couple’s income came from the taxpayer-funded Sovereign Grant.

However after their decision became public, Buckingham Palace announced the couple would no longer receive public money.

The Home Office also funded the couple’s Metropolitan Police security detail, however this was withdrawn when they permanently relocated, leaving the couple to foot the bill for their own security at an estimated £4million-a-year. 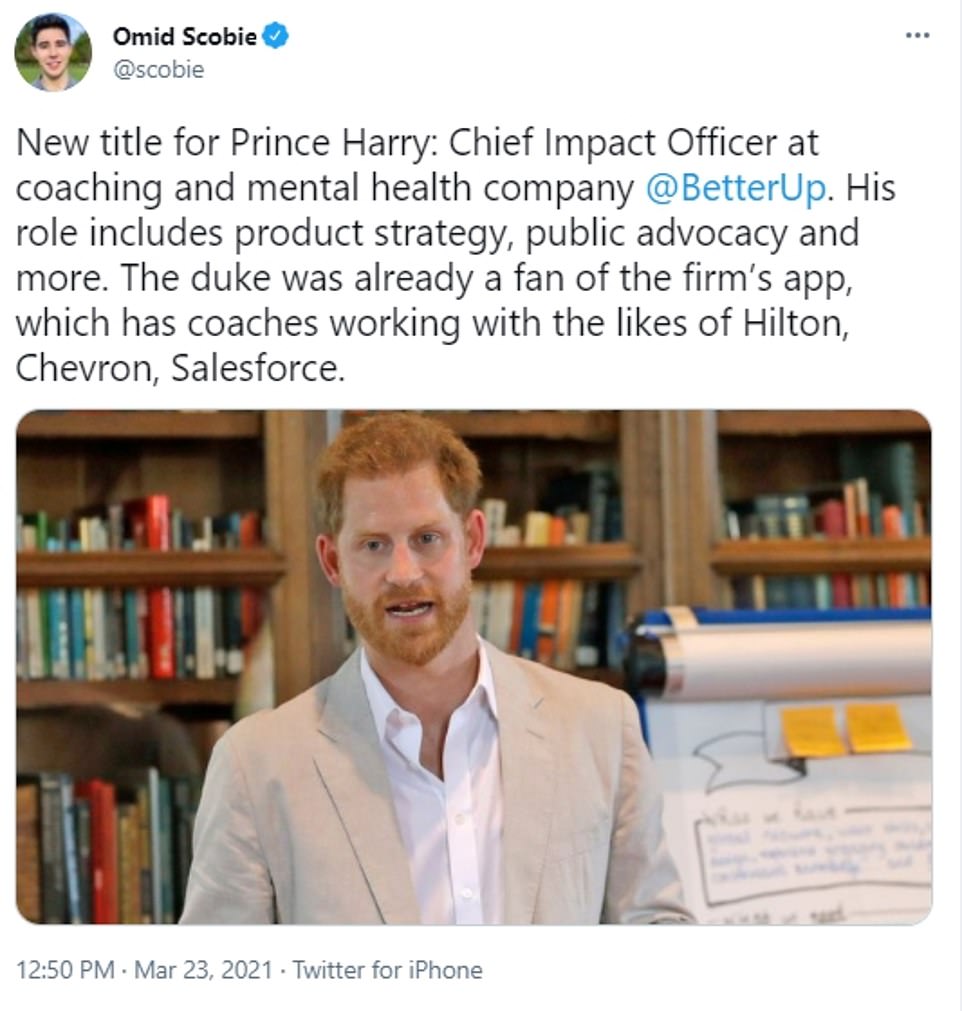 Harry’s new job was trailed by Omid Scobie. A friend of the Sussexes who wrote their biography

Last year, the couple paid back the £2.4million cost of refurbishing Frogmore Cottage after it was initially covered by the taxpayer, as well as taking on a £7.5million mortgage on their California home.

Harry was left about £6.5million when his mother, Diana, Princess of Wales, died in 1997. It is thought to have matured to around £10million by the time of his 30th birthday.

Asked by Miss Winfrey about the perception that the couple could be seen as ‘money-grabbing royals,’ Harry said: ‘We’re certainly not complaining. Our life is great now.’

He added that ‘all I needed was enough money to be able to pay for security to keep my family safe.’

The couple have set up their own company, Archewell, which encompasses a not-for-profit enterprise as well as their production companies for audio and video content.

It aims to drive ‘systemic cultural change across all communities, one act of compassion at a time.’

Last year, the duchess took on one of her first major media engagements since stepping back as a senior royal, narrating a Disney nature documentary about elephants.