Victoria McRae made headlines when she managed to give the hunky royal a peck on the lips three years ago – and the young woman is holding out hope that he still might pick her over Meghan Markle. 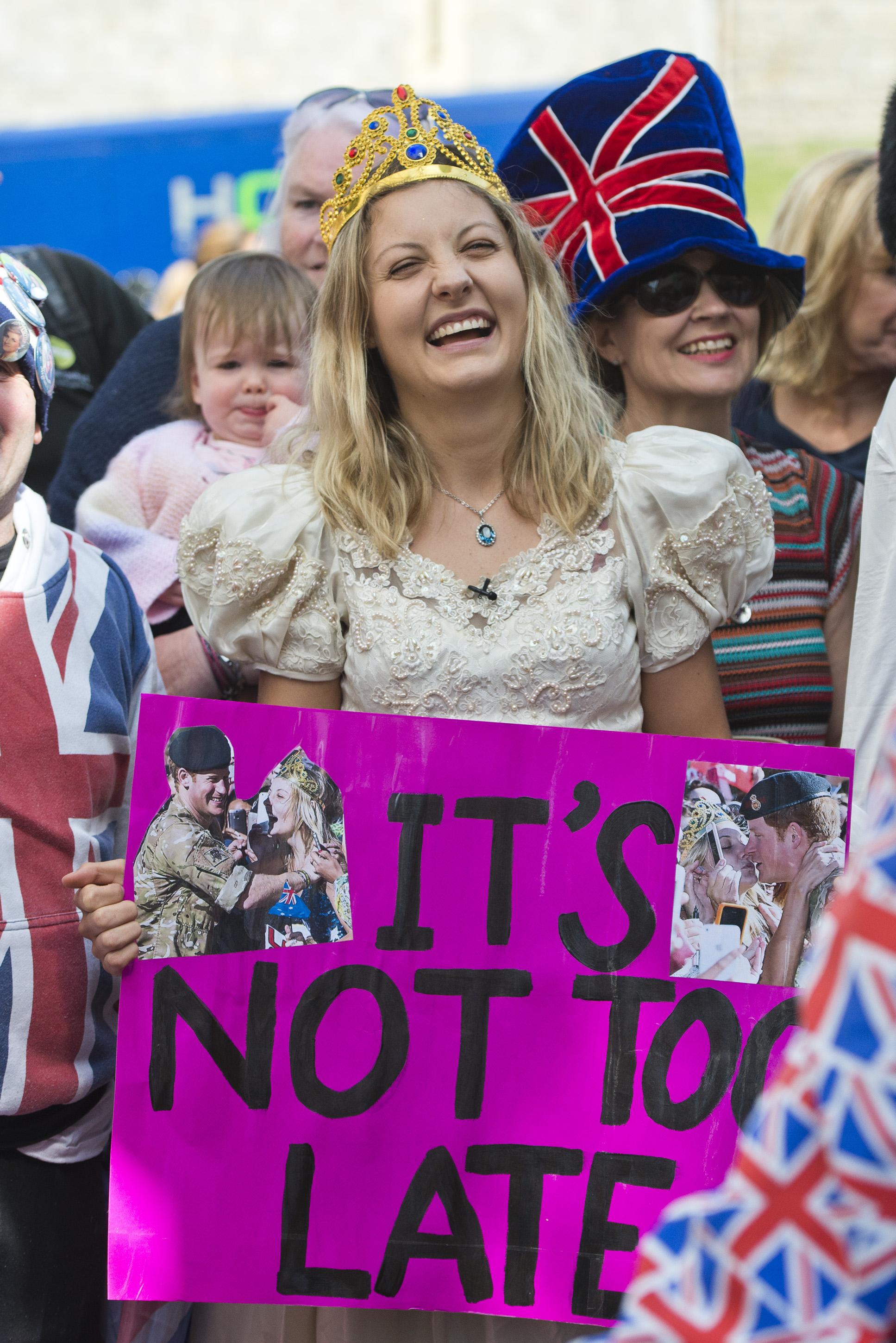 Posing happily with a crown perched on her head, Victoria today held up a sign reading: "It's not too late".

Wearing her replica Princess Diana wedding dress, the young woman is just one of hundreds already flocking to Windsor ahead of the Royal Wedding tomorrow.

Victoria has already popped the question to Prince Harry several times – even hiring a kayak to try to paddle out to see him in Sydney Harbour in 2013 before she was stopped by police.

She has previously claimed she permanently wears a replica Duchess of Cambridge engagement ring. 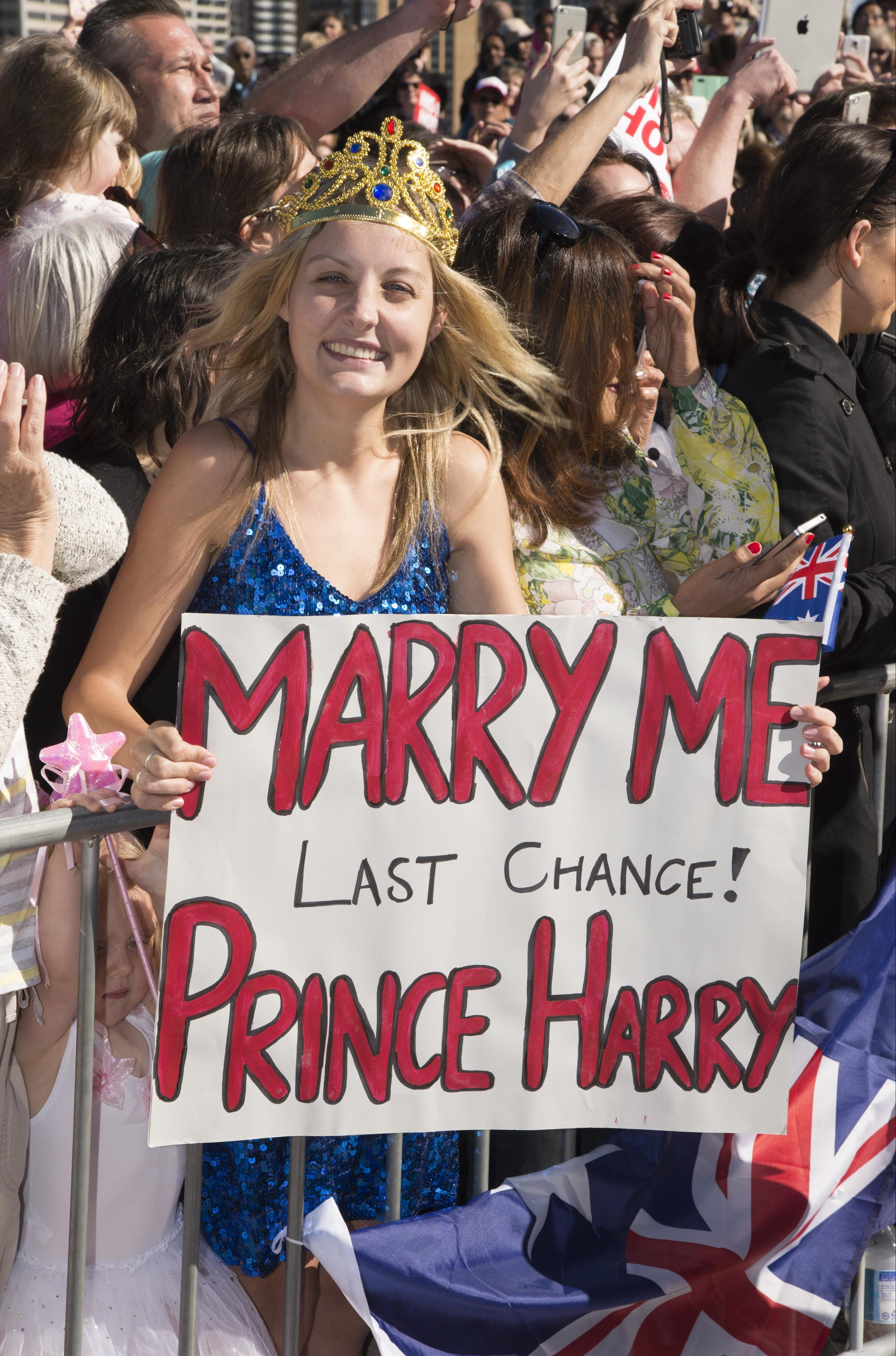 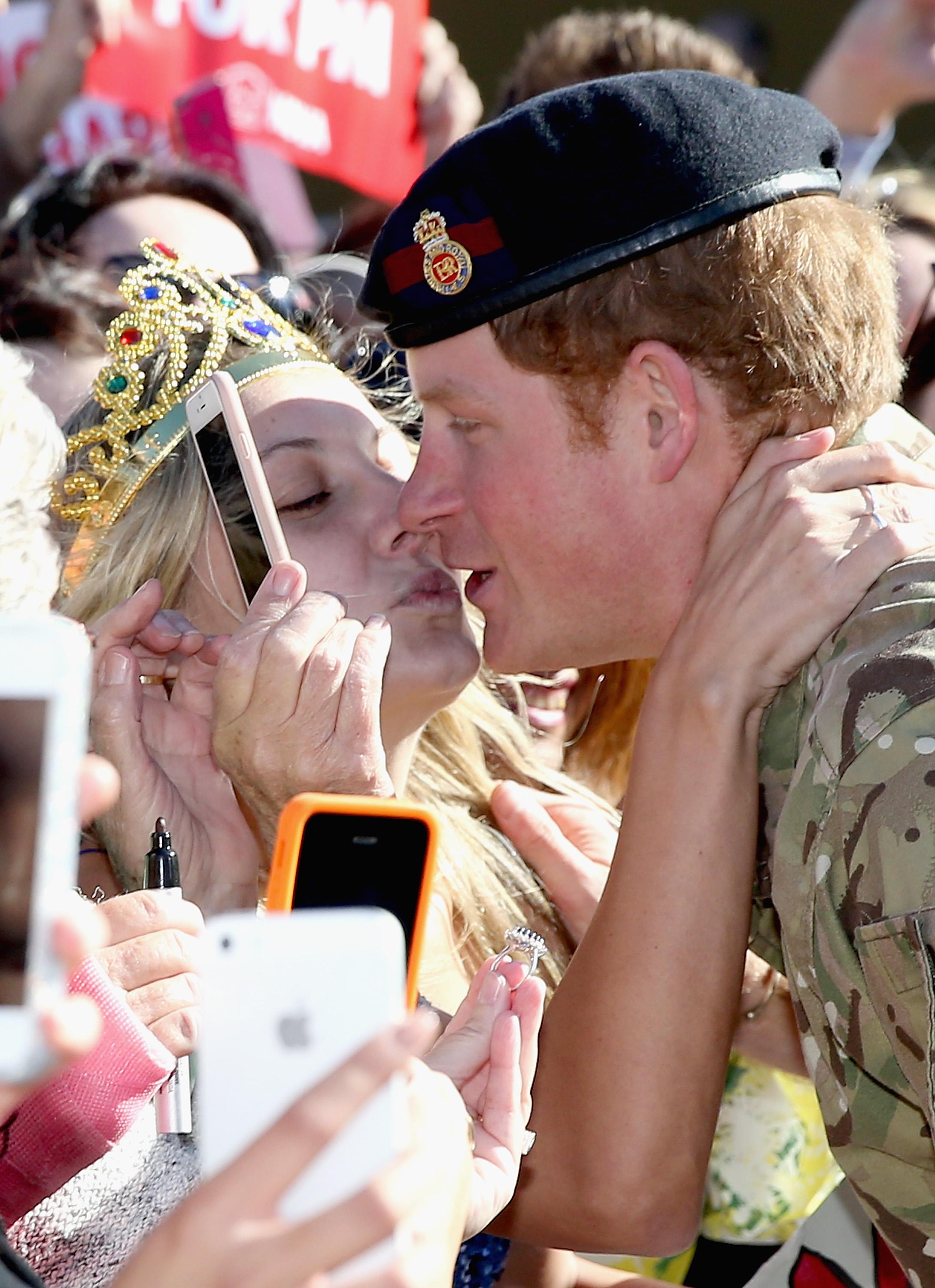 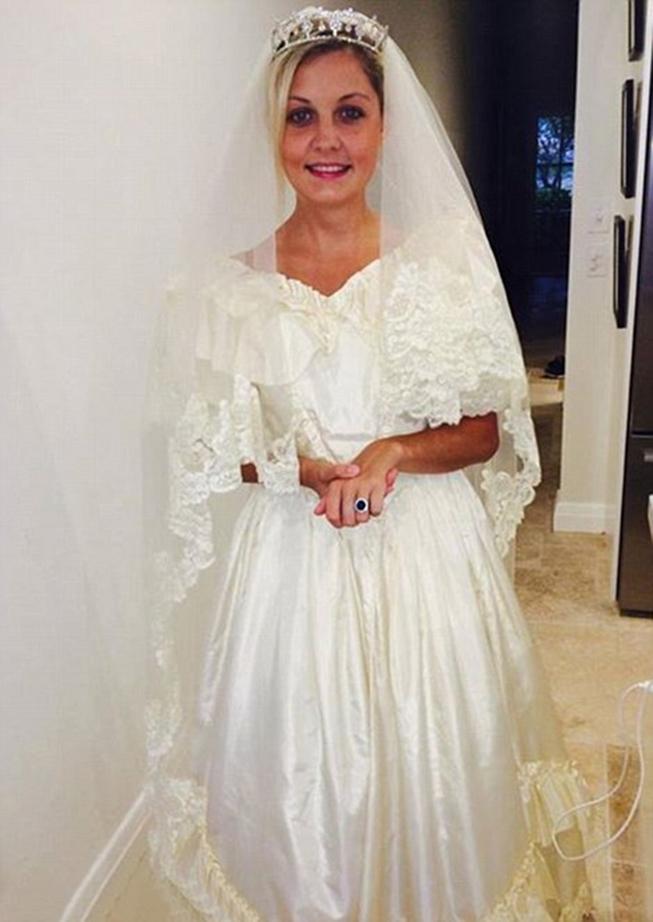 Excited Victoria has joined other keen royal fans outside St George's Chapel ahead of the wedding of the year.

Fans have draped themselves in blue, red and white as they celebrate, waving Union Jack flags and posters wishing the loved-up couple the best.

Others have even taken to wearing Harry and Meghan masks as excitement for tomorrow's ceremony gears up.

An estimated 5,000 people lined the route of the 25-minute carriage ride that the couple will take tomorrow. 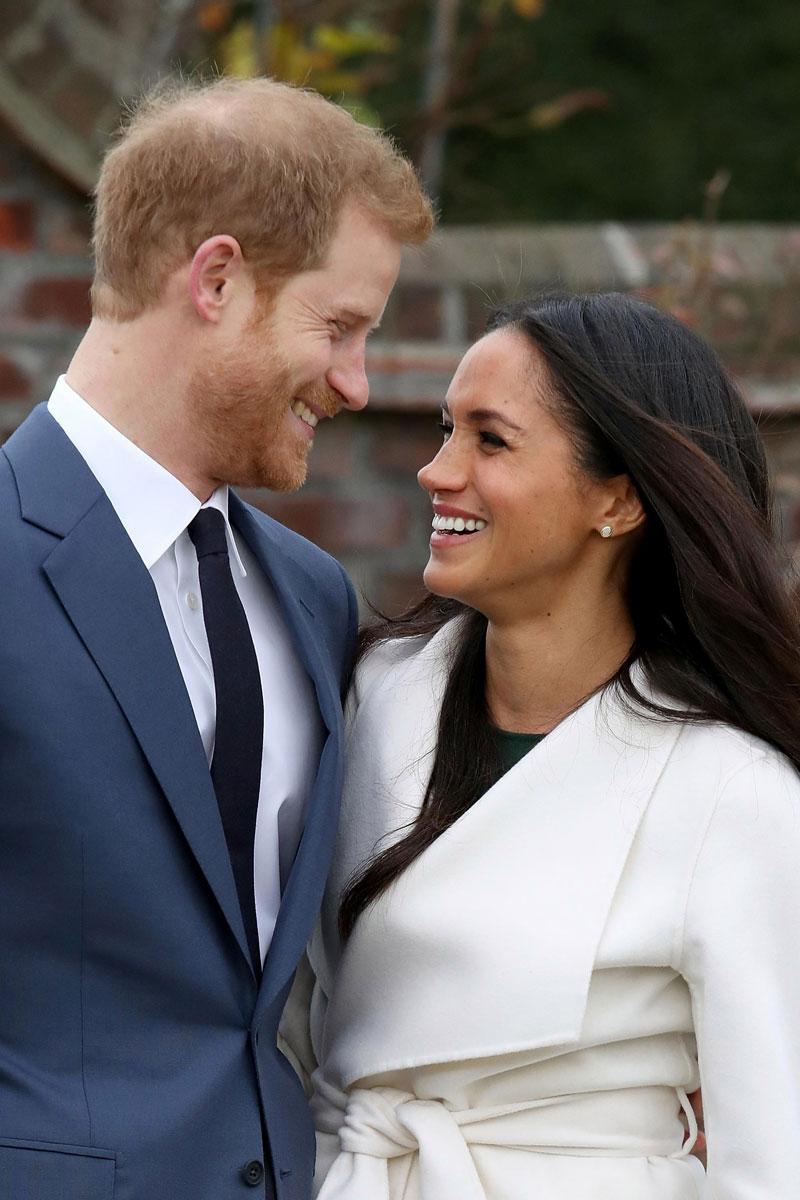 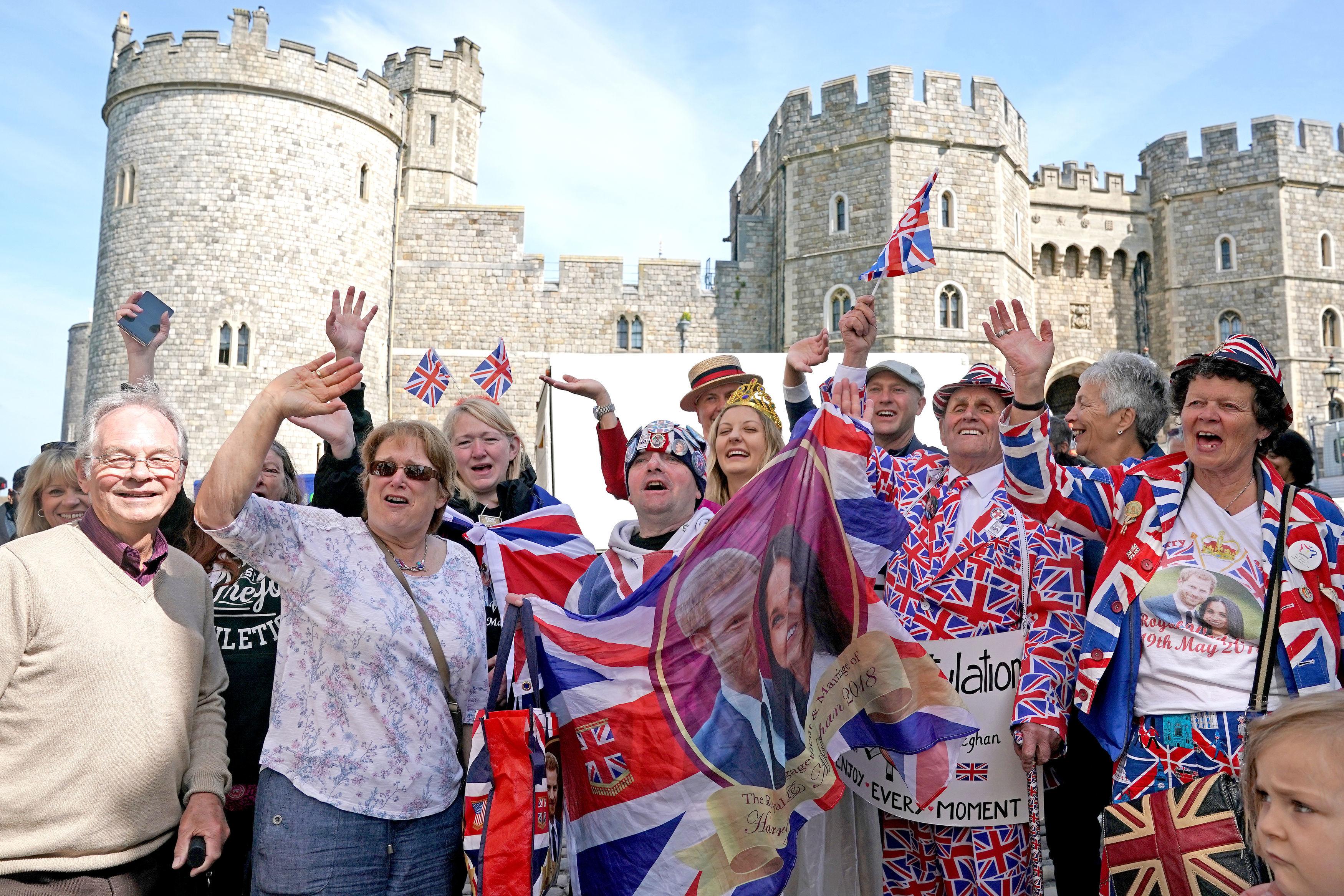 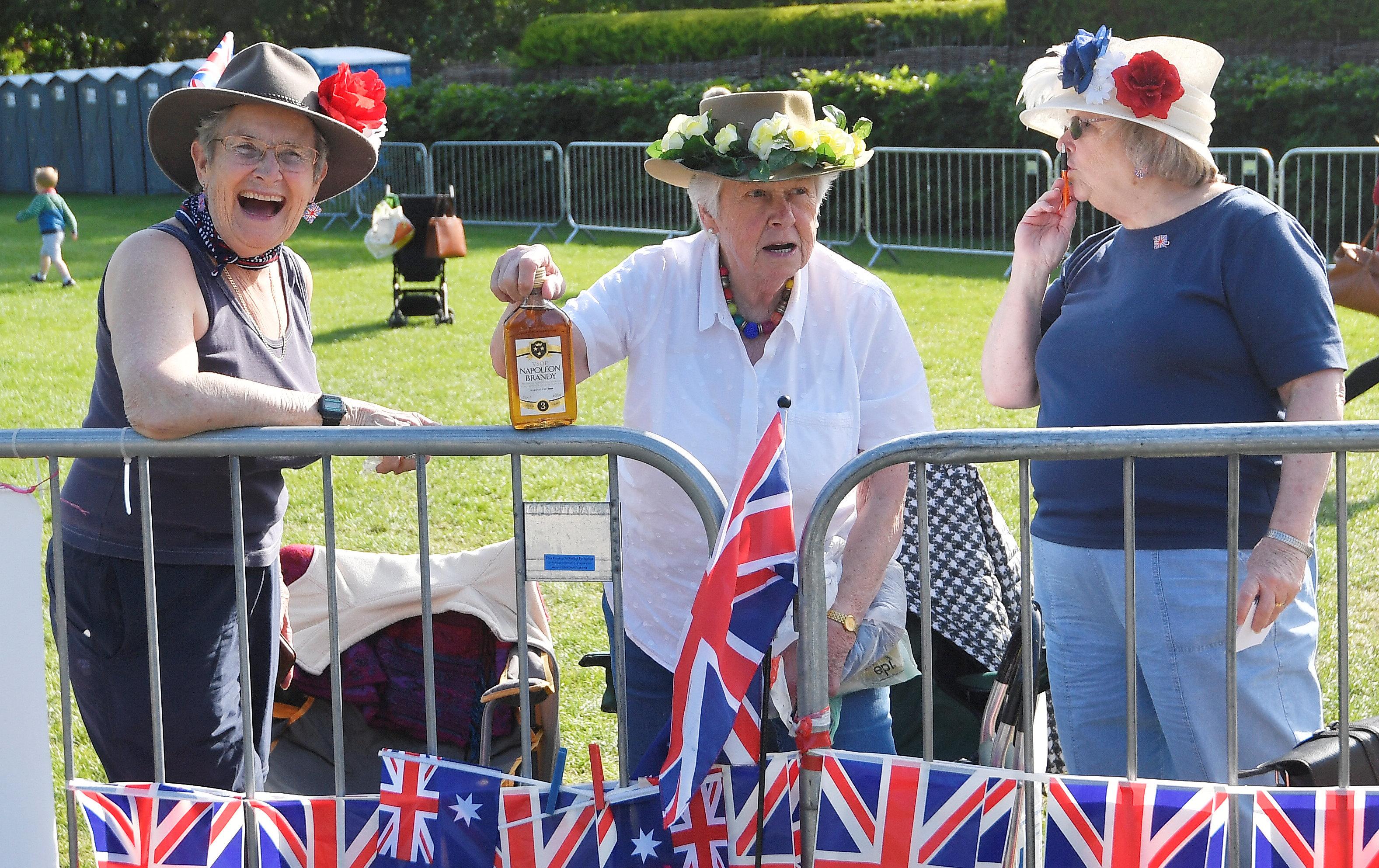 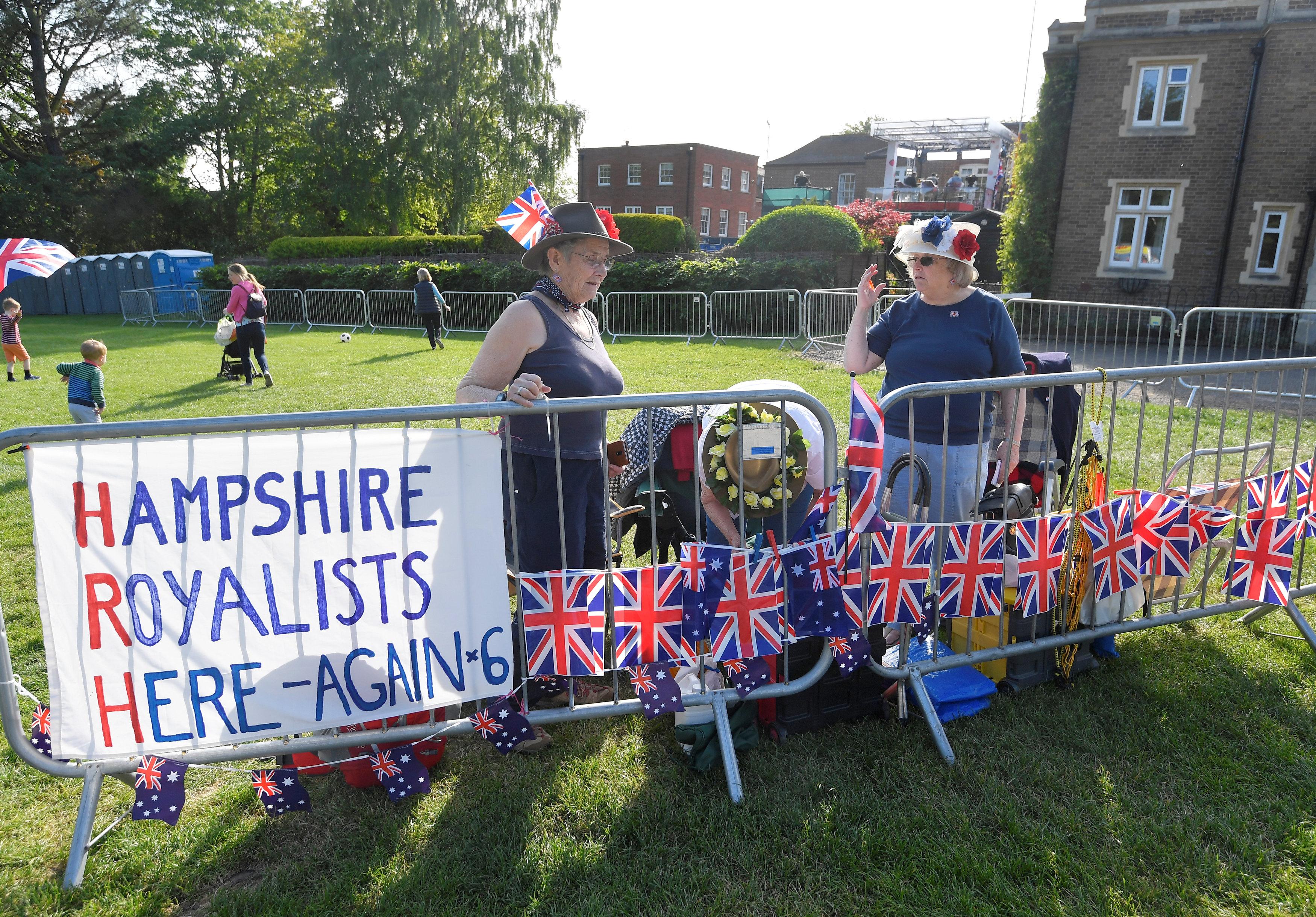 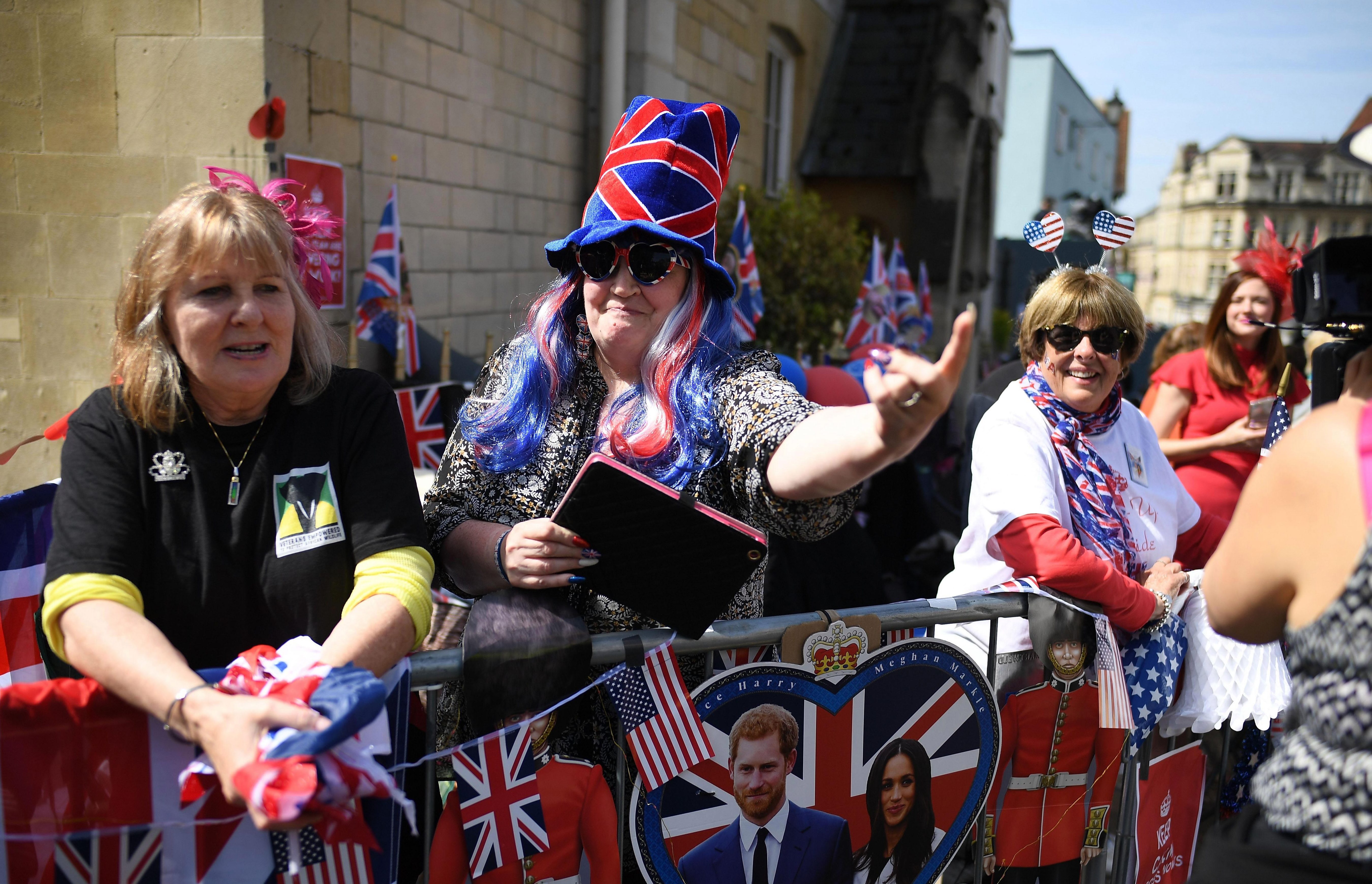 And with temperatures expected to reach 23C for tomorrow, it's sure to be a perfect day out.

Tourist Keelam Blood, 36, of Toronto, Canada, is among the crowds, saying: "It’s sure to be a magical occasion, but I think it might be better to watch it on TV.

“Windsor is a beautiful town, but it obviously wasn’t built with massive crowds in mind.

"You’ll need to have sharp elbows to get a good view – and god forbid you need to use the toilet!"

Fellow visitor Jeanie Cummings, 54, of Cork, Ireland, said: “Hopefully the happy atmosphere will prevail, or things could get nasty, especially if everyone is standing around in the boiling sun.

“I’m sure it will be run with military precision. We’ll be up early to get a good spot.

“I can’t wait to see Harry and Meghan on the happiest day of their lives.” 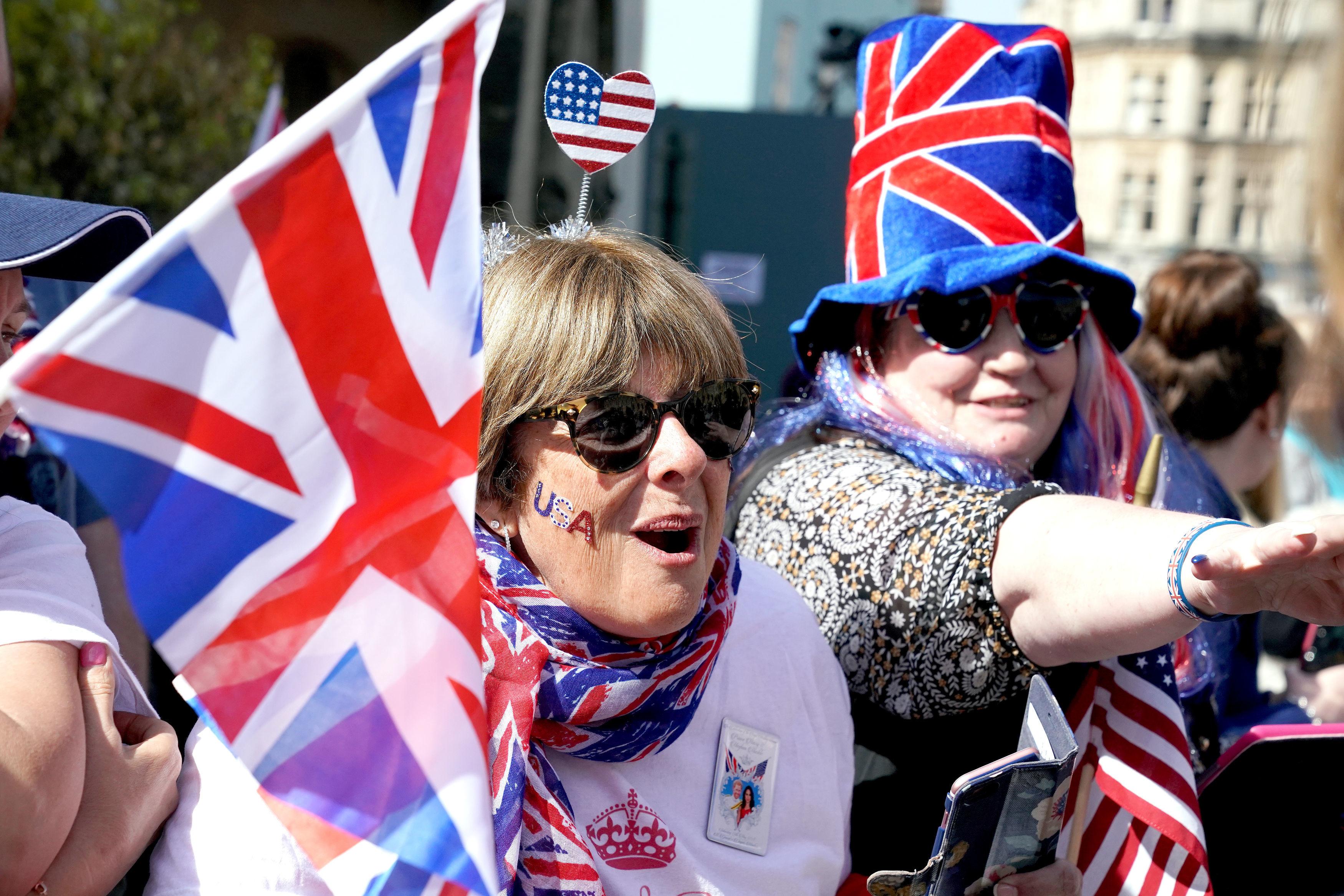 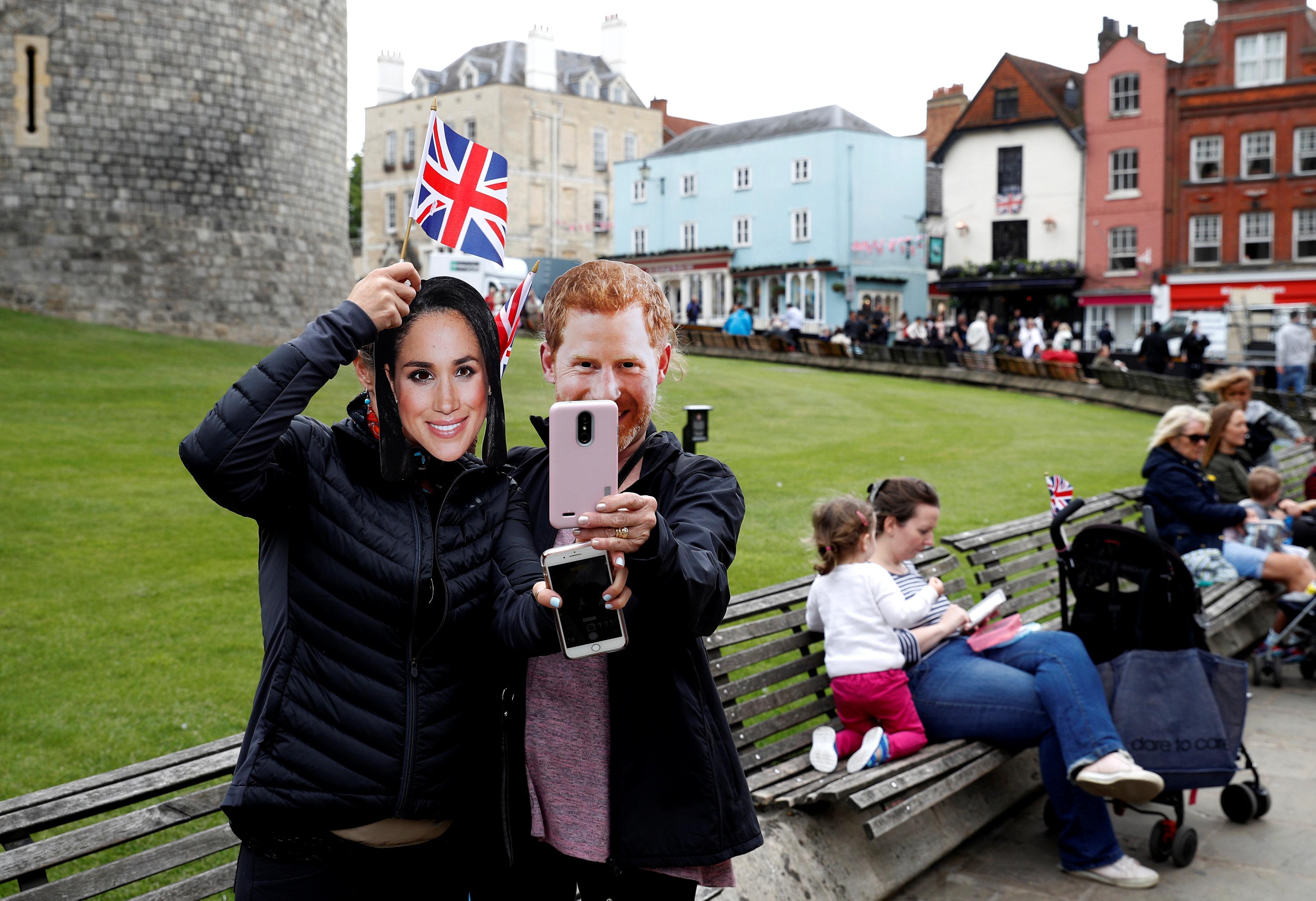 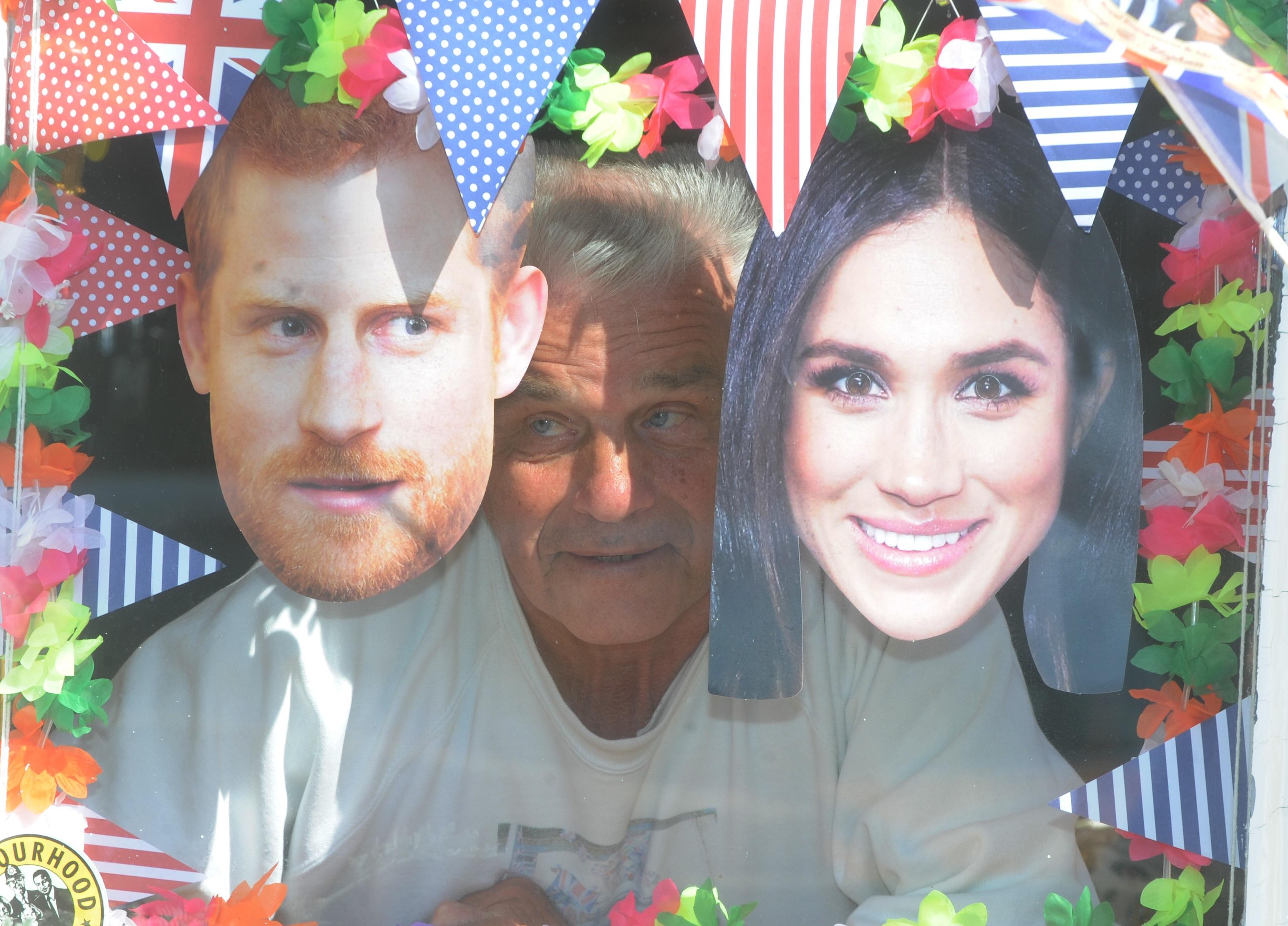 The procession will take about 30 minutes on Saturday following the wedding service in St George's Chapel, with about 250 members of the armed forces thought to be taking part.

Rehearsals for the big day have already gone ahead with the Royal family heading to Windsor yesterday.

Police have been seen patrolling the area, with the heavy presence steadily increased throughout Windsor during the buildup.

Extra security measures may include snipers, undercover police and military tech, such as a counter-drone system.

However, much of the carefully-planned and choreographed build-up to the ceremony has been overshadowed in recent days by confusion over whether Meghan's father would attend.

It was yesterday confirmed that the 73-year-old, who lives in Mexico, would not be attending the wedding.

Kensington Palace instead announced that the US actress would walk down the aisle with Prince Charles by her side.