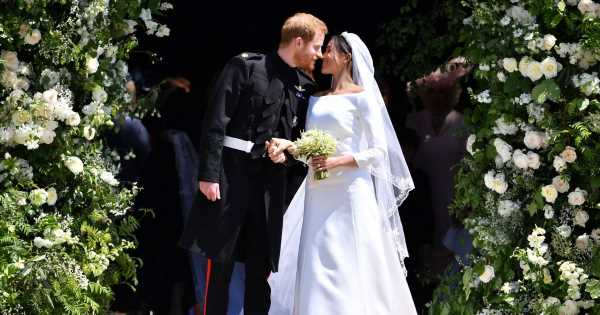 Although the pair share royal blood, Prince Harry and William are said to be the 'opposite' in matters of the heart.

Harry "wore his heart on his sleeve", claims a royal biographer, different from Prince William.

Harry claimed his older sibling "didn't have a romantic bone in his body" before he met Kate Middleton during his best man's speech for their wedding in 2011.

Ingrid Seward said Harry was more open with his feelings in comparison.

She also says he faced a different experience from William because the older brother was able to attend university and meet Kate under privacy.

But, Harry had to "run the gauntlet of the intense public interest his love life generated", Ms Seward claims.

She said: "When he took girls out, he was so paranoid about being seen that he would make them sit in the back of the Range Rover under a blanket en route to the restaurant."

Before Harry met Meghan Markle he dated Chelsy Davy on and off for seven years.

Previously Chelsy told The Times she "couldn't cope" with the intense scrutiny their romance received within the public eye.

Ms Seward added: "In a way, Harry was the opposite of his brother.

"He wore his heart on his sleeve and wanted to marry almost every girl he fell in love with, while William was more concerned about being able to give commitment."

William is believed to have said: "Don't feel you need to rush this.

"Take as much as time as you need to get to know this girl."

The royal told host James Cordon during an interview on The Late, Late Show that "everything was done back to front" when the pair began dating, writes The Sun.

They would have cosy nights in over glitzy dinners at the beginning of their relationship.

He said: "Rather than going to friends' houses or out for dinner where there were other distractions [we had] no distractions. It was great.

"We went from zero to 60 in the first two months."

The couple married in 2018 at St George's Chapel at Windsor Castle with almost 30million people tuning in to watch them tie the knot.

Meghan and Harry later stepped down as senior royals and moved to the US with son Archie.

They are expecting their second child together, a baby girl, in the summer.