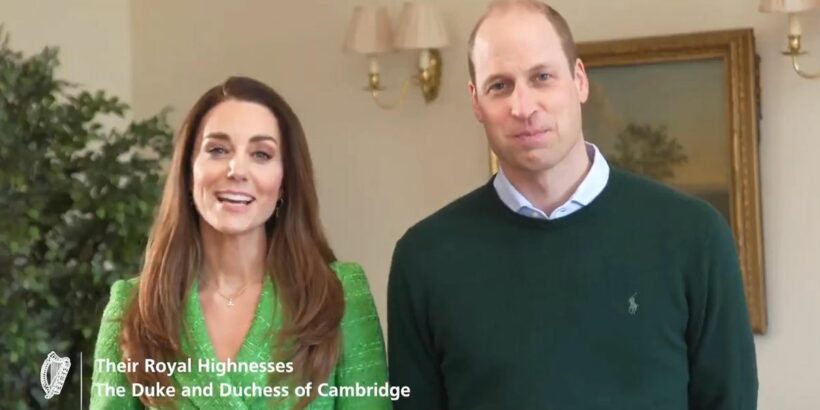 Kate Middleton and Prince William were all smiles as they joined world leaders to share a St Patrick's Day message.

The Duke and Duchess of Cambridge donned matching green as they appeared in a special video greeting alongside US president Joe Biden, Canadian PM Justin Trudeau and others.

William then quipped to his wife: "How come you got that easy bit?"

The couple appeared not to be worried by the ongoing drama with Meghan Markle and Prince Harry following their bombshell interview with Oprah Winfrey.

Kate and William donned different shades of the republic's national colours as they recalled the warm Irish welcome they received on a visit to the country last March.

William said: "We were so thrilled to be able to visit Ireland just over a year ago, a few short weeks before all of our lives were turned upside down by the pandemic."

Kate added: "The warm welcome that we received everywhere was a testament to the friendship between our two countries, and the strength of the relationship between the UK and Ireland."

William, who is Colonel of the Irish Guards added: "We know that for Irish people all around the world today won't be the same as normal, but we hope you can celebrate safely in any case."

It comes as the Sussexes on Tuesday reignited Palace fury after details of Harry's private conversation with Prince Charles and William were leaked, the Sun reports.

CBS This Morning show anchor Gayle King, a pal of Meghan, 39, said told millions of viewers that the chats had been "unproductive".

Palace chiefs are believed to be outraged over the leak and a source branded it "a shocking breach of trust".

The Queen vowed that an investigation into the couple’s claims in a bombshell interview with Oprah, including those of racism, would be "addressed by the family privately".