Amman, Jordan: Britain's Prince William has kicked off a politically delicate five-day tour of Jordan, Israel and the Palestinian territories, preparing to meet with young people, refugees and national leaders in a tumultuous region that Britain had controlled between the two world wars. 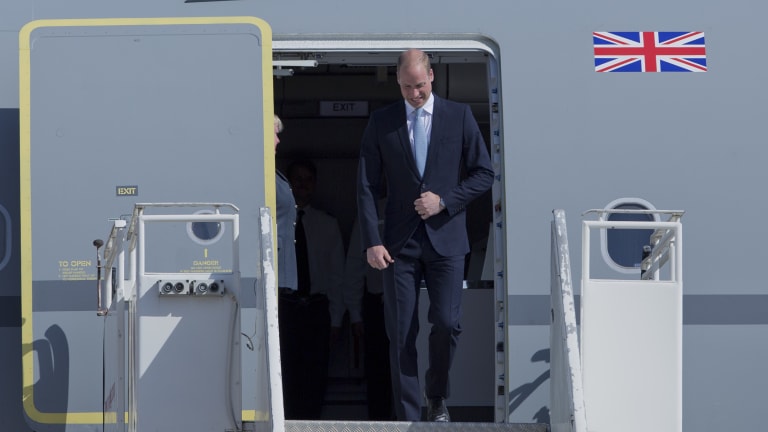 Prince William disembarks from a Royal Air Force plane after landing at the Marka airport in Amman, Jordan.

Though billed as non-political, it's a high-profile foreign visit for the 36-year-old William, second in line to the British throne.

On Sunday, William was welcomed in Jordan by 23-year-old Crown Prince Hussein, a member of the Hashemite dynasty Britain helped install in then-Transjordan almost a century ago. William was greeted by an honour guard after his plane landed at a small airport on the outskirts of the capital of Amman.

In two days in the kingdom, he will visit a technology outreach group for young Jordanians, tour a vocational training college with links to Britain's Middlesex University and meet Syrian refugee children.

On Monday evening, the prince leaves for Jerusalem for the first-ever official visit by a member of the royal family to Israel and the Palestinian territories.

William will meet with Israeli Prime Minister Benjamin Netanyahu in Jerusalem and Palestinian President Mahmoud Abbas in the West Bank city of Ramallah at a time of widening rifts between the two sides. 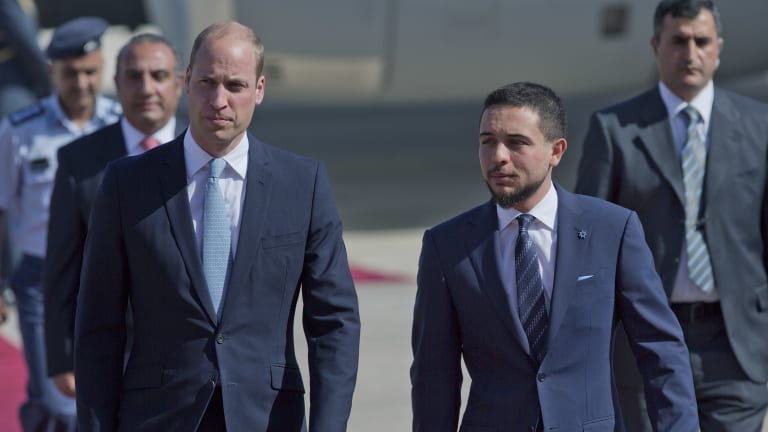 It comes as Jared Kushner, son-in-law and senior adviser of US President Donald Trump, fresh from a week-long trip to the Middle East, said his Israeli-Palestinian peace plan would be presented soon.

Netanyahu told his cabinet on Sunday that he met twice with Kushner and Greenblatt on the weekend and discussed "how to solve the humanitarian situation in Gaza without strengthening Hamas".

The Palestinians refused to meet with Kushner, and leaders have criticised the Trump negotiating team in recent days. It remains unclear how the Trump administration would proceed with a peace plan without Palestinian co-operation. 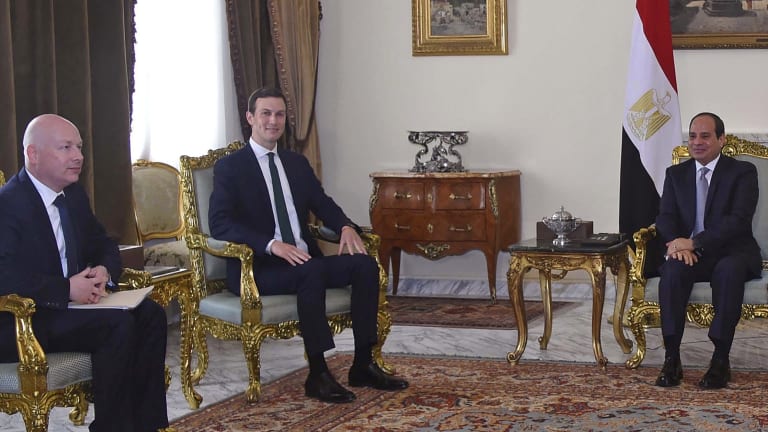 Jared Kushner, centre, meets with Egyptian President Abdel-Fattah al-Sissi, right, and Midlle East envoy Jason Greenblatt in Cairo on the latest stop in a regional tour to discuss a blueprint for an Israeli-Palestinian peace deal.

In an interview in the Arabic language al-Quds newspaper, Kushner said the plan was "almost done" but offered scant details aside from the promise of economic prosperity. He made no mention of a Palestinian state arising alongside Israel, though he acknowledged that Arab partners support that goal.

The Israeli-Palestinian conflict typically looms large, even during largely ceremonious visits, and William will have to maneuvered carefully to avoid missteps.

Last week, an Israeli Cabinet minister complained about the royal itinerary's reference to Jerusalem as part of the "Occupied Palestinian Territories", calling it a distortion of reality. 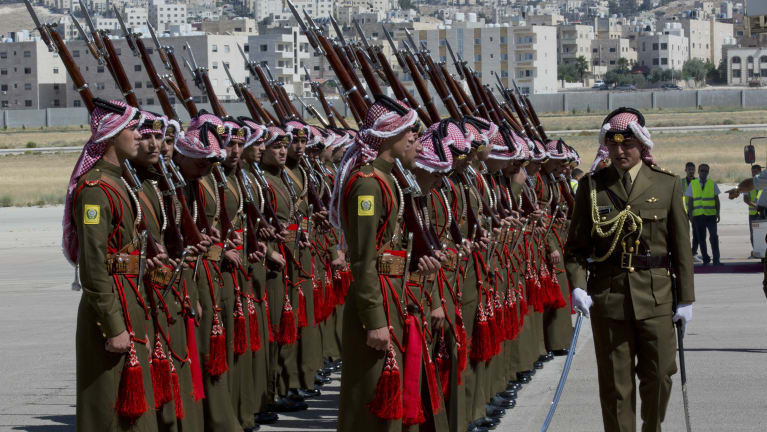 A Jordanian army officer inspects the honour guard in preparation for the arrival of Prince William.

Israel captured east Jerusalem from Jordan in the 1967 Middle East war and annexed it in a move not internationally recognised. Israel considers the eastern sector, home to sites sacred to Jews, Christians and Muslims, as an inseparable part of its capital. Palestinians seek east Jerusalem as the capital of a future state they hope will also include the West Bank and Gaza Strip.

Hanan Ashrawi, a senior official of the Palestine Liberation Organisation, said she welcomed William's visit to the West Bank as a chance to see Palestinian reality under Israeli occupation first hand.

"This visit is the first of its kind and represents an opportunity to enhance relations between Prince William and the Palestinian people on all the levels," she said.

William is visiting a region where three decades of British rule between the two world wars helped establish some of the fault lines of today's Israeli- Palestinian conflict. Britain's withdrawal from the region after World War II led to the eventual establishment of Israel and Jordan.

The second marriage of the late King Hussein was to a British citizen, Antoinette Gardiner, who took the title Princess Muna and is the mother of the current monarch, King Abdullah II. Hussein, Abdullah and Crown Prince Hussein all attended Sandhurst, the British military academy, as did William.

William's wife, the former Kate Middleton, spent two years in Jordan as a toddler when her father moved the family there during a work assignment. A Middleton family photo shows Kate, her younger sister Pippa and her father in the ruins of Jerash, the ancient Roman city William was due to visit on Monday.

After Sunday's airport arrival ceremony, the first stop for the prince is FabLab, an organisation that offers young people a chance to explore technology and is backed by the Crown Prince Foundation. On Sunday evening, William delivered a speech during a reception hosted by the British Embassy in Amman.