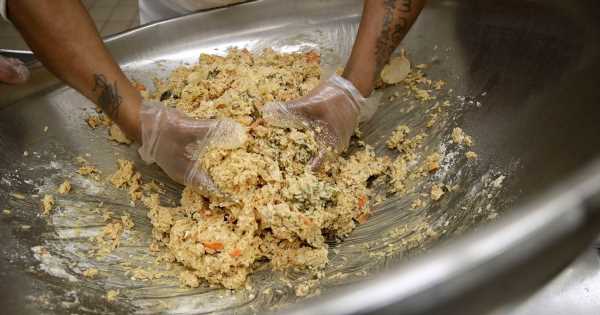 A prison in the US has been branded "disgusting" for serving an "inhumane" mystery bread loaf to inmates that step out of line.

One state lawmaker, Rep. Kimberly-Ann Collins, said she wouldn’t even feed the concoction to a dog. She has introduced legislation banning the loaf from the Department of Corrections’ menu.

The use of “prison loaf” – or nutraloaf – to punish unruly prisoners is a hot issue, and has been banned in some states.

READ MORE: 'Hot woman in handcuffs' told to see an exorcist after 'demonic' smirk in mugshot

“I think the Department of Corrections should come up with something else. It’s disgusting,” Collins said.

“I think it’s inhumane to serve people something like that,” she added. “That’s like feeding somebody uncooked meatloaf.”

The wretched looking dish is usually a mix of ingredients like ground beef mixed with beans, tomato paste, carrots, and binding agents such as potato flakes, dry grits or rolled oats.

St Louis Today reported the "mushy gruel-like substance" becomes soggy because even fruit juice is added to it in Missouri.

Karen Pojmann, communications director with the Missouri Department of Corrections, said the food wasn't meant to be a punishment, but a protection.

“We don’t serve meal loaves in response to disciplinary issues,” Pojmann said. “They would be served only in cases of extreme safety concerns, such as a situation in which an offender is using utensils, food trays, etc., as weapons for self-harm or violence against others.”

“I don’t think we have a system in place for tracking meal loaf servings,” she said on the subject of how often the dish is served.

The American Correctional Association said in 2011 that meals like the loaf must meet basic nutritional requirements and be used for no more than a week straight.

Some states, like New York, have ditched the dish after legal trouble with civil rights groups.