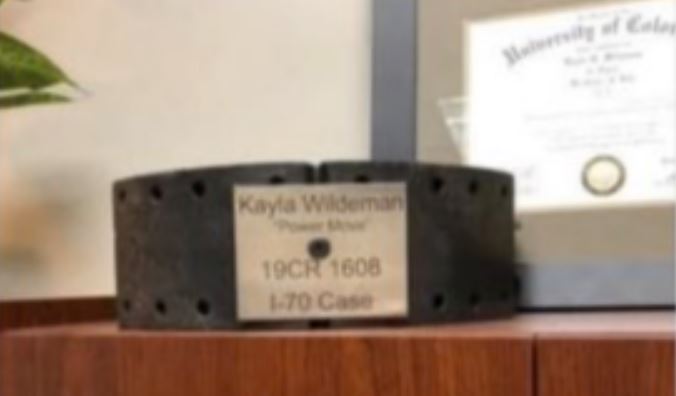 The two deputy district attorneys who prosecuted the trucker sentenced last week to 110 years in prison for causing a fatal pileup on Interstate 70 exchanged a trophy-like gift featuring a truck’s brake shoe after the guilty verdict, according to a screenshot of a Facebook post by Deputy District Attorney Kayla Wildeman.

In the undated post, which appears to have since been deleted or made private, Wildeman wrote that Senior Deputy District Attorney Trevor Moritzky, who worked the trial with her, turned a “brake shoe from a semi truck into a memento.”

An image attached to the post shows a gold plaque on an apparent brake part. The plaque includes Wildeman’s name, the case number for the trucker’s case and the phrase “I-70 Case.”

The truck driver, Rogel Aguilera-Mederos, 26, said during the trial that he lost his brakes in Colorado’s high country on April 25, 2019, and could not control the semitrailer he was driving. He crashed into stopped traffic under an overpass in Lakewood and killed four people in a fiery 28-car pileup.

First Judicial District Attorney Alexis King said in a statement Monday that the brake shoe in question was not a piece of evidence from the case.

“The post was in very poor taste and does not reflect the values of my administration,” the statement said. “We have addressed it internally.”

Wildeman and Moritzky could not be reached for comment Monday.

“This is very disturbing,” Tristan Gorman, legislative policy coordinator for the Colorado Criminal Defense Bar, said about the post. “It obviously flies in the face of the prosecution’s ethical obligation to seek justice rather than a conviction… It’s just bragging rights about a trial win, where people on both sides, their lives were either ended or forever changed. The tone of it seems almost like the prosecutor is treating it like a game she won.”

Aguilera-Mederos’s 110-year mandatory minimum sentence has been widely criticized since he was sentenced last week, with more than 4.3 million people signing an online petition asking that Gov. Jared Polis commute the sentence.

King said last week that she would “welcome” a reconsideration of Aguilera-Mederos’ sentence, despite her office prosecuting the charges that ensured that 110-year sentence.

Aguilera-Mederos’ sentence stretched to more than a century because, under Colorado law, first-degree assault and attempted first-degree assault are so-called “crimes of violence” in which prison sentences must run consecutively, and not concurrently, when they spring from the same incident.