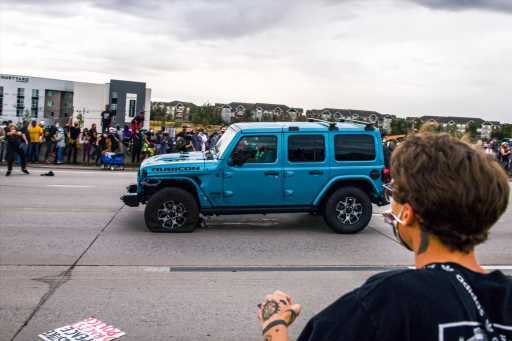 The 24-year-old protester accused of shooting two people while firing at a Jeep that was driven toward a crowd of demonstrators marching on Interstate 225 in Aurora nearly two years ago is set to stand trial Friday.

Samuel Young was protesting police violence with a large crowd that was blocking I-225 on July 25, 2020, when a Jeep driver sped toward the group.

As people rushed to get out of the driver’s path, Young pulled out a gun and fired six shots at the vehicle, authorities said. He hit the back of the Jeep twice, but also shot two fellow protesters, then-18th Judicial District Attorney George Brauchler said.

One man was shot in the leg and another was grazed in the head. A woman leaped from the highway and broke her leg in the panic.

Brauchler declined to charge the driver of the Jeep, despite witnesses who said the driver appeared to intentionally speed into the crowd. He said there was not enough evidence that the driver purposely tried to endanger protesters or acted recklessly.

The incident in the summer of 2020 happened at the height of the nationwide protests against police violence that were prompted by the murder of George Floyd, when tensions were high locally and across the country, and was one of several vehicle-versus-pedestrian conflicts at demonstrations in metro Denver.

The protest that evening in Aurora was focused on the death of Elijah McClain, a 23-year-old Black man who died in 2019 after Aurora police officers used a carotid chokehold on him and paramedics injected him with ketamine, a heavy sedative.

More than a year after the march, in November 2021, two paramedics and three Aurora police officers were indicted on charges of manslaughter and criminally negligent homicide in McClain’s death; their cases are pending.

Young’s case deepened some protesters’ distrust of police, while others in the crowd felt he was reckless when he opened fire.