Three animal rights activists have been arrested after disrupting a Sea Lion show at Antwerp zoo in Belgium.

One of the protesters was forced to jump into the pool after an angry audience member approached her as they held up placards saying ‘stop shows with animals.’

The footage, which was caught on an audience members phone, shows a trainer interacting with the animals during the Sea Lion performance at the zoo.

Members of the audience can then be heard booing as the protesters emerged carrying signs around the pools perimeter, forcing the show to come to a halt in front of a packed audience.

The clip then shows a male audience member approach a female protester and appears to try to attack her but  she manages to avoid him by jumping into the pool.

The audience can be heard applauding the man’s actions as the woman is seen, still clutching her sign above her head, in the pool as he returns to his seat. 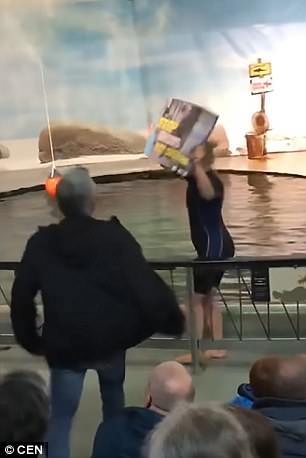 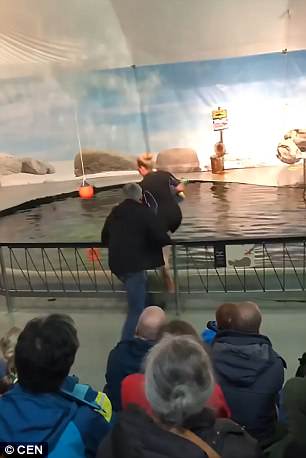 The animal rights activists disrupt the show by carrying placards around the pool perimeter before an audience member, shown here, appears to try to attack a female protester

The shows announcer can be heard saying several times: ‘You do not know what you are talking about. Just leave.’

All three protesters, believed to have come from the Netherlands, were later arrested by police for disturbing public order at the zoo. 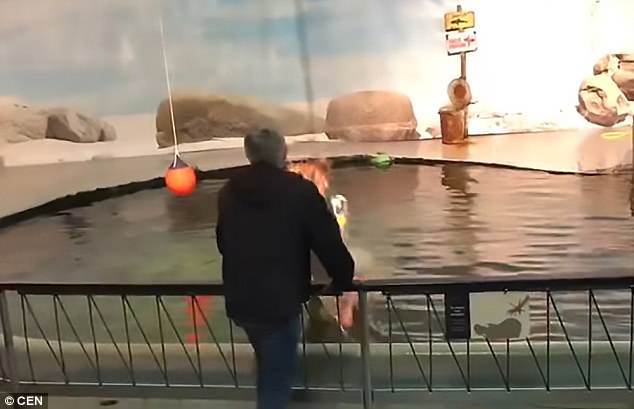 The woman, here partially obscured by the man, continues to hold up her placard despite being submerged in water after she is forced to jump into the pool

She said: ‘The shows are temporarily cancelled to give the animals and zookeepers some peace. They were of course scared by the incident.’

‘We are actually on the same side when it comes to the welfare of animals,’ she said. 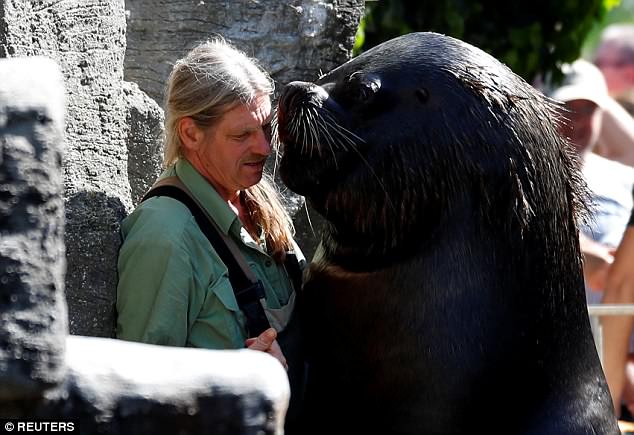 Sea lions are extremely social animals. In captivity, and when interacting with humans, they are extremely quick to learn. Here, a sea lion interacts with a zoo keeper in Vienna

Sea Lions are said to be extremely social animals. Like many marine mammals, they  are remarkably intelligent with excellent senses of sight, hearing and smell.

In captivity, and when interacting with humans, they are extremely quick to learn, and have been exhibited in shows and circuses for centuries.

They swim at speeds of up to 25 miles an hour, dive deep into the ocean and remain underwater for nearly 10 minutes, and gather in huge colonies.

Critics of keeping animals in captivity say that the intelligent animals are being denied everything that is natural and important to them.

There have been reports that keeping them in the pools causes damage to their eyes, skin and mental health.

In 2016, a whistleblower and former employee of Sea Lion splash contacted PETA to reveal horrific abuse of the sea lions, including revelations that trainers beat them with pipes and poles.