The Belgian protests came as France prepared for "Act 3" of nationwide protests against "green" fuel tax rises and the high cost of living. These are showing little sign of abating after talks with Edouard Philippe, the French prime minister, ended in fiasco on Friday night. 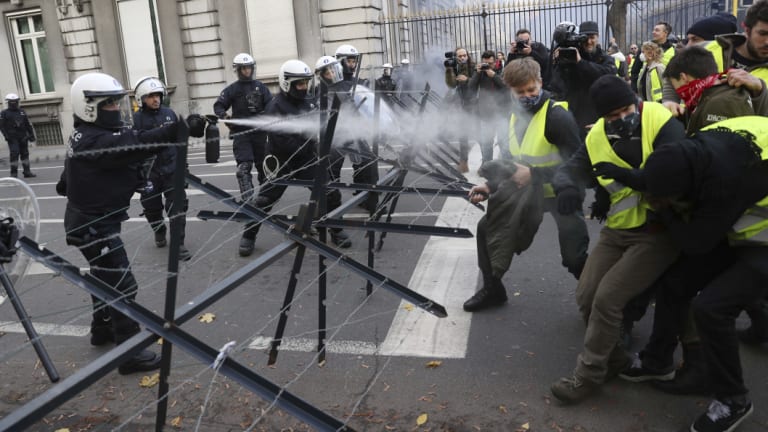 Police spray tear gas at demonstrator during a protest of the yellow jackets in Brussels, Friday, Nov. 30, 2018. The demonstrators are protesting against rising fuel prices. Credit:AP

In Brussels, around 300 people demonstrated outside the prime minister's office, some hurling rocks as they faced off with police, before continuing on towards major EU buildings. At least 74 people were arrested – some accused of possessing box-cutters, smoke bombs or tear gas canisters.

Two police vans were tipped over and torched as the stand-off continued and the protesters blocked off the tunnels that ease Brussels' notorious congestion.

Metro stations were closed as a precaution as the protest teetered on the brink of street fighting, despite the demonstrators' repeated insistence their march was peaceful. 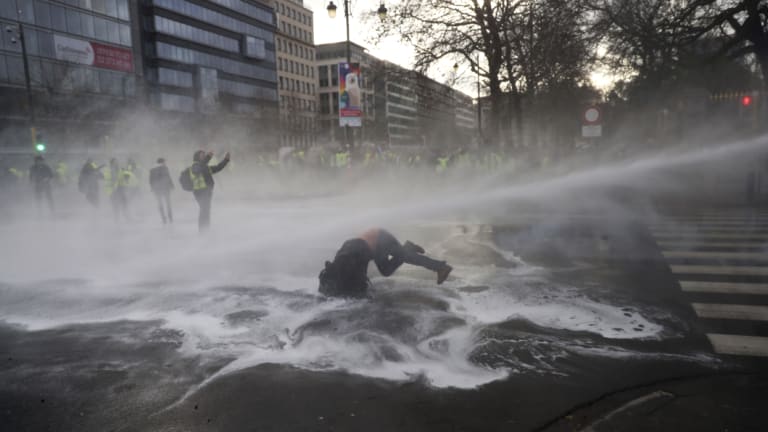 A water cannon is used on a yellow jacket protester in Brussels.Credit:AP

"Incomprehensible violence towards the police who do their best every day to protect citizens and society. Scandalous," tweeted Jan Jambon, the Belgian interior minister.

"We want this movement to spread," said Gilles, who did not want to give his full name.

"It began in France, it is here now, and we want it to continue to Germany and the Netherlands, across Europe, even to England." 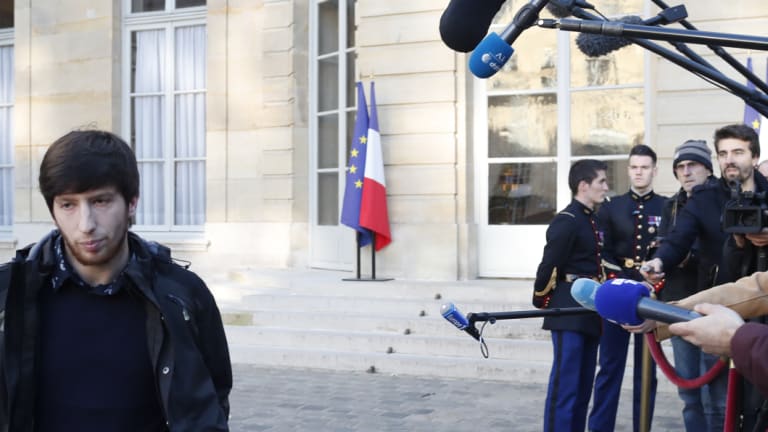 Over in Paris, builders were busy boarding up flagship banks and stores along the Champs-Elysées as "the world's most beautiful avenue" braced for its third straight Saturday of violence.

"It's as if there was a war. It's incredible," said Paris resident Olivier Le Quellec. "We are sealing off the centre of the village. It becomes a little ghetto. It's frightening."

Motorists protesting a fuel tax hike have been joined by farmers, white collar workers, retirees and others in the movement that now involves a broad range of demands related to the country's high cost of living.

Their list of demands includes tax cuts, the creation of a citizens' assembly, state-funded subsidies to help companies boost hiring, and higher pensions and a higher national minimum wage.

A spokesman for France's Union of National Police Chiefs said it was critical to be prepared for Saturday's events.

"We can't be naive. Tomorrow is a day of risks," David Le Bars said on BFMTV.

In what Emmanuel Macron, the president, called "war scenes", a peaceful protest descended into running battles and tear gas, leaving many of the avenue's windows smashed.

Police have mobilised up to 5000 officers, are banning traffic and allowing in pedestrians only after ID checks.

Christophe Castaner, the interior minister, said access would be "very tight", with bag searches and systematic requests for identity papers from anybody trying to enter. 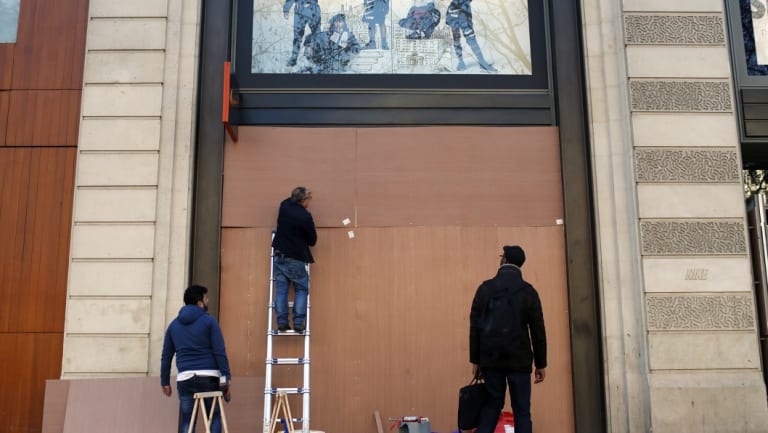 Workers reinforce store windows on the famed Champs Elysees avenue to prepare for an expected protest by the “yellow jackets”.Credit:AP

Despite the extra measure, the avenue's new Apple store, which opened earlier this month, will be shutting for the whole day.

French government attempts to negotiate with the "yellow vest" movement collapsed on Friday after just two representatives turned up for a meeting with the prime minister and one immediately walked out after being told he could not invite TV cameras in.

Jason Herbert, one of the leaders, said he cut short his meeting with Prime Minister Edouard Philippe after his request for a live transmission of the encounter was refused. Another protester remained, spending an hour with the prime minister but choosing to remain anonymous.

Philippe said later that his talks with the remaining protester were useful and his door was open if the "yellow jackets" choose representatives.

"So as not to betray anyone, I didn't want to take part in a discussion," Herbert said, reflecting the complex nature of the grassroots movement with no leaders.

The eight-member delegation set to meet the prime minister "no longer exists," he said.

"We have all received enormous pressure … threats, be they verbal or physical," Herbert said. "Our lives are still at stake." He said that 89 per cent of the threats he received came from other "yellow jackets who maybe thought we were there for the glory."

He described those proffering threats as people "terribly hopeless, terribly miserable (who) lost everything (because) everything was taken from them."

Mr Macron has refused to back down on his anti-pollution taxes. Speaking on the sidelines of the G20 summit in Argentina, he said he understood "the legitimate anger, the impatience and the suffering of some people".

But he warned that any measures announced "in the coming weeks and months" would "never be a retreat" on policy.