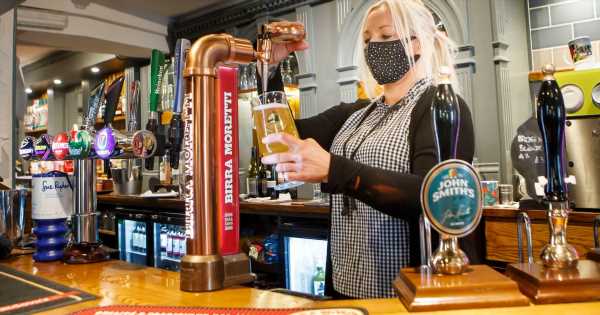 Pub bosses have criticised Boris Johnson’s suggestion they will have to decide whether to allow entry to those who have not had the Covid-19 vaccine.

The boss of the Shepherd Neame chain said on Thursday that making jabs mandatory for entry to pubs is a “fairly poorly thought out idea”, as trade bodies suggested the move would be “simply unworkable”.

However, details of a strong incentive have emerged for pubs to adopt checks of health certificates under the potential plans.

The PA news agency was told pubs may be allowed to scrap social distancing rules if they check customers’ certificates at the door – although no decisions have been made yet.

The Prime Minister said on Wednesday that it “may be up to individual publicans” whether they require customers to have a vaccination certificate.

Tory lockdown sceptic Steve Baker warned the move could create a “two-tier Britain”, while Labour frontbencher Ed Miliband said it would be wrong to leave the public health measure up to pub landlords.

“I think it’s absolutely fine to exclude people where there is a situation of bad behaviour or drunkenness, and that’s already enshrined in law,” he told BBC Radio 4’s Today programme.

“But if you’re going to exclude people for what they are, or what they have not done, that’s a wholly different issue which does touch on discrimination, civil liberties, and in this case data protection issues.”

He warned the move could also see bar staff “subject to intimidation”, adding: “This is fraught with difficulty, I think, and it is, in my view, a fairly poorly thought out idea at this stage.”

Clive Watson, the founder of City Pub Group, also told PA that it could become “absolutely chaotic and discriminatory”.

He said: “If you can’t require all hauliers coming into the country to have vaccine passports it is mad to suggest someone might need one to go to the pub.

“It’s discriminatory and a lot of people, including myself, have had a vaccine but haven’t got a way to immediately prove it.

“The paperwork would be an absolute nightmare.”

Mr Watson added that around 90% of his workforce are under-40 and would therefore “not work operationally either”.

Patrick Dardis, chief executive of 190-year-old pub owner and brewer Young’s, said the possibility of mandatory vaccines for pubs “is unworkable and the Government should stay clear of it”.

“We do not support this idea,” he added. “At this point in time the Government should focus on encouraging people to enjoy their summer holidays in the UK than go abroad.

“This will be a far greater benefit to the economy than to opening up the huge risk of bringing Covid variants back to the UK from abroad.

“It is exactly how the pandemic entered into the UK in the first place.”

Cabinet Office minister Michael Gove is reviewing the possible use of coronavirus status certificates under plans to ease England’s lockdown.

The use of certificates may not be as straightforward as vaccine or no vaccine, as recent negative test status may also be considered.