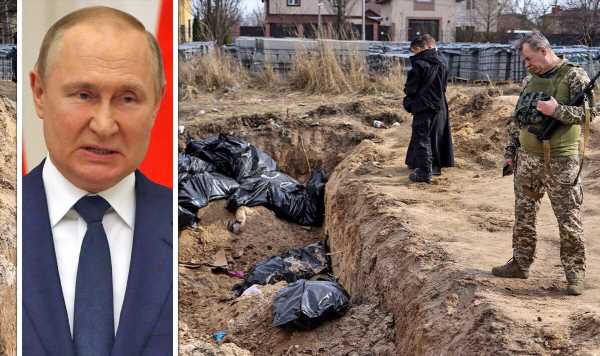 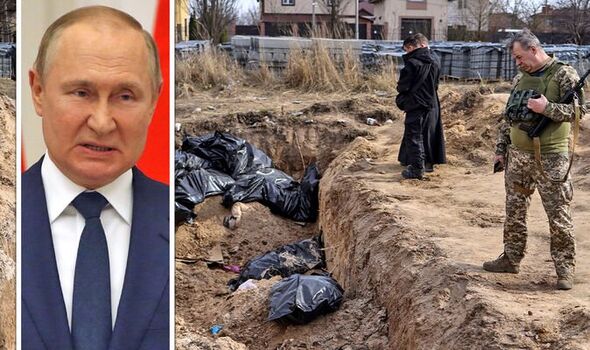 The chief prosecutor in the capital Kyiv announced that she and her team were facing an ever growing list of tens of thousands of alleged war crimes by Russian soldiers since the start of the invasion.

Prosecutor General Iryna Venediktova revealed that so fast is the growing number of incidents, she is now receiving reports of between 200 to 300 war crimes by Putin’s forces on the ground in Ukraine every single  day.

The Kremlin defiantly continued to deny any wrongdoing whatsoever by its commanders or their soldiers.

But with the discovery of mass graves, repeated shelling of civilian targets – including schools and hospitals – the evidence of atrocities now set to be prosecuted at the conclusion of the war is mounting.

In particular, Ukraine says it has uncovered multiple mass graves in Bucha and other towns near Kyiv that were briefly seized by Russian troops.

And Prosecutor General Ms Venediktova told on Thursday of the ballooning scale of the investigations.

While she admitted that many trials would have to be held ‘in absentia’, she nevertheless stressed that it was “a question of justice” to continue with the prosecutions.

And she issued a warning that Russian soldiers who killed, tortured or raped civilians “should understand that it’s only a question of time when they all will be in court”.

Ms Venediktova added that although her team was working in regions across Ukraine, it was unable to investigate all cases “properly and effectively” because of a lack of access to some people and areas.

This was an apparent reference to Ukraine’s territories occupied by Russian troops.

Ukrainian authorities, determined to hold their invaders to task, have so far revealed that more than 600 suspects have already been identified and 80 prosecutions started.

The first Russian soldier to be put on trial in Ukraine, Sgt Vadim Shishimarin, was sentenced to life in prisonfor killing a civilian in May.

Ukraine says it has uncovered multiple mass graves in Bucha, Borodyanka and other towns near the capital Kyiv that were briefly seized by Russian troops.

The International Criminal Court has described Ukraine as a “crime scene”, dispatching its largest team of detectives ever to the country to assist in multiple investigations.

But Moscow has repeatedly denied targeting civilians and dismissed all allegations of wrongdoing by its invading forces.