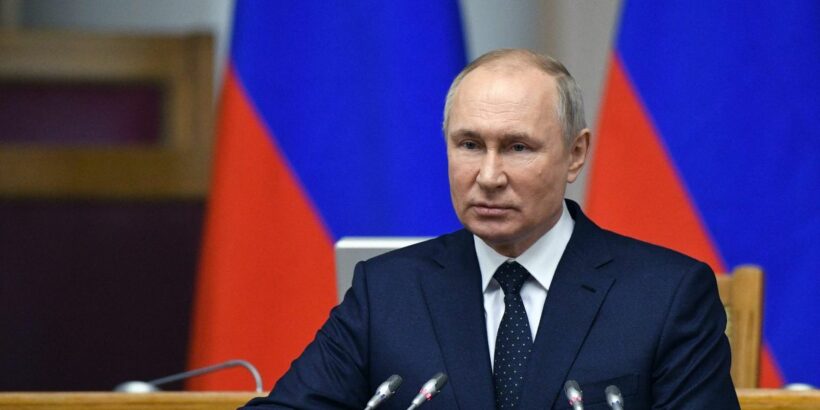 Vladimir Putin is behind the "pyramid-shaped" UFOs that were filmed swarming a US Navy ship, an ex-senator has claimed.

Harry Reid said "there is no question about it" after the Pentagon confirmed the leaked footage was genuine.

A triangle or pyramid-shaped object was filmed hovering high above the missile-carrying destroyer USS Russell in July 2019.

A Department of Defence spokeswoman also confirmed the video was being investigated by the Pentagon’s Unidentified Aerial Phenomena Task Force.

Senator Reid told Mystery Wire UFO news site: "They are coming in swarms, like bees, like insects, so many of them."

Asked over the possibility the UFOs were advanced Chinese technology, he said: "Always remember Russia, the Soviet Union, is run by a man who ran the KGB.

"They had as many as 31,000 agents at one time. So Russia is involved in this, no question about it."

The Russian president worked as a KGB foreign intelligence officer for 16 years before resigning in 1991 to enter politics.

It comes after a former US intelligence officer said UFOs have disabled US nuclear weapons facilities – sparking fears China or Russia could control the "foreign adversarial technology".

Luis Elizondo says he was the former director of the Advanced Aerospace Threat Identification Program (ATTIP), a secretive Pentagon unit that reportedly studied UFOs, between 2007 and 2012.

The expert recently claimed the US government is gearing up to reveal the "reality" of UFOs.

He told a press conference: "I think for me the most concerning thing are those incidents that involve our nuclear equities.

"There seems to be a very distinct congruency between UAP (Unidentified Aerial Phenomena), associated UAP activity and and our nuclear technology.

“Whether it be propulsion or weapon systems or whatnot. And that’s concerning to the point where we’ve actually had some of our nuclear capabilities disabled by these things.

"So, you know, again, let’s put this into context of foreign adversarial technology if Russia or China had the ability to disable our nuclear strike capability or defence capability.”

Meanwhile, the explosive footage of "pyramid-shaped" UFOs may just be the beginning, with the filmmaker behind the leaks claiming there are “nine” more videos.

Three photos of a “spherical” craft which was observed “descending into the water” by the crew of the USS Omaha in July 15, 2019, were also published on his website extraordinarybeliefs.com.

And he has since shared a fourth image of the Omaha craft too, which he says is a screenshot from the video.

Another expert has claimed a UFO report signed off by US president Donald Trump just before he was replaced by Joe Biden could reveal super-smart aliens are visiting us in peace.

Professor Daniel Drezner said so days after the US former director of national intelligence John Ratcliffe revealed the Pentagon files included declassified intelligence of aircraft "that exceed the sound barrier without a sonic boom" last month.