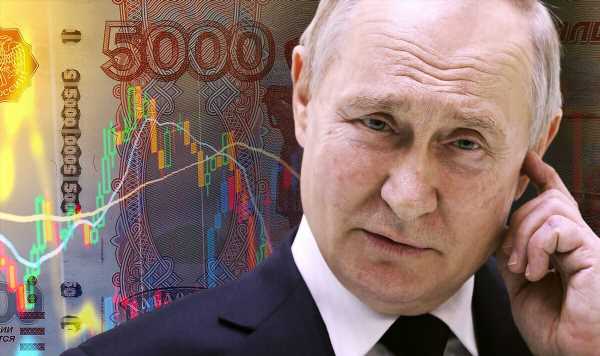 Russian President Vladimir Putin is eating through his foreign currency reserves, but is concealing the billions of pounds being spent on the war in Ukraine, Yale University experts tell Express.co.uk. Jeffrey Sonnenfeld and Steven Tian have been closely following the Russian economy since the start of the invasion in February 2022.

They say that Putin has been able to keep Russia’s economy going through the use of the country’s foreign currency reserves.

However, this has proved expensive for the Kremlin, which is now concealing its expenditure in an effort to mask the economic damage Putin’s war is causing.

Mr Tian told Express.co.uk: “It’s the billion-dollar question because as soon as we did a study showing how quickly he was depleting his reserves, Putin stopped recording how much reserves he is spending every month.

“In July, we produced a report which said Russian foreign currency reserves had depleted by $75billion (£60billion) since the start of the war.

“Ever since then, we have not seen any more numbers on what’s going on. Putin has $600billion (£483billion) in reserves sitting there and still accessible.”

Mr Sonnenfeld added: “If Putin was so proud of his economy, why would he conceal how much he has in foreign currency reserves? Why would he hide his imports and exports data if it was so positive?

“He’s concealing this information because it is getting worse.”

In December, it was also reported that Russia’s budget gap jumped to record levels, meaning the country is borrowing more than it ever has before.

This also means that Russia’s spending is more than 30 percent higher than had been forecast at the start of 2022.

Russia had aimed to keep its spending surplus at no higher than one percent.

Mr Sonnenfeld continued: “You look at the deficit, other nations around the world do run deficits, but they get somebody to fund it. Nobody is buying Russian debt.

“Putin can’t fund this debt, and that’s more troubling than the actual debt.”

Mr Tian added: “Putin’s reserves can’t last forever, and this is putting a squeeze on him in a way nothing in the last 20 years ever has.”

While Russia has tried to paper over its economic cracks, the former chief economist of the International Monetary Fund (IMF) has warned this week that the country faces huge difficulties going forward.

Harvard professor Kenneth Rogoff said Russia could end up like a “giant Iran”.

Speaking at the World Economic Forum in Davos, he said: “If Russia escalates, what are we doing? We need to be ready. They need to know that is coming.”

He added that Russia will face “incredible poverty” and that Europe needs “to concentrate on our defence capabilities” in case Putin escalates.