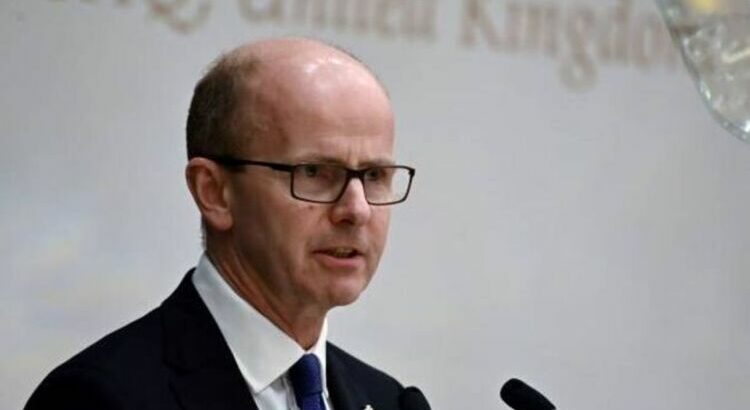 Head of GCHQ Sir Jeremy Fleming will give a speech in Australia on Thursday, where he is expected to outline Russia’s use of Wagner mercenaries and cyber attacks to try and gain the upper hand in the war in Ukraine. He will also list the mistakes that have been made by the Putin regime, such as underestimating the Western response and overestimating his own military capabilities.

Security and defence editor for Sky News Deborah Haynes broke news of the speech on Twitter.

She wrote: “BREAKING: Demoralised Russian soldiers in Ukraine have accidentally shot down their own aircraft, sabotaged their own kit and refused to carry out orders, Sir Jeremy Fleming, director of the UK spy agency @GCHQ, will reveal in a speech in Australia on Thursday.”

Sir Jeremy will say that the soldiers are “short of weapons and morale” and have been seen “refusing to carry out orders, sabotaging their own equipment, and even accidentally shooting down their own aircraft”.

It is not known exactly how many planes have been shot down, but the information is reportedly based on intelligence.

In his speech Sir Jeremy will address how it looks “increasingly” likely that Putin has “massively misjudged the situation” in Ukraine, and that Wagner is reportedly looking to “send large numbers of personnel into Ukraine to fight alongside Russians”.

Wagner is a private military company who, according to Sky News, have “suspected links to the Kremlin”.

They report that these Wagner mercenaries would probably be “cannon fodder” to “limit Russian military losses”.

He will say: “Recently, we have seen that Wagner looks to be taking it up a gear.

“They are looking at relocating forces from other conflicts and recruiting new fighters to bolster numbers.

“These soldiers are likely to be used as cannon fodder to try to limit Russian military losses.”

Two of his other main points will be China’s position on the conflict and indications that Moscow is looking to carry out cyber attacks “in the countries that oppose their actions”.

DON’T MISS:
100,000 MORE techies ‘to leave’ Russia in IT industry exodus [SPOTLIGHT]
Could Russia split up the ISS? How Putin could pull out of SPACE law [INISIGHT]
Putin humiliated as Chechen warlord leader breaks ranks [LATEST]

He will say on China: “[President Xi] has not publicly condemned the invasion, presumably calculating that it helps him oppose the US.

“And, with an eye on re-taking Taiwan, China does not want to do anything which may constrain its ability to move in the future.

“There are risks to them both (and more for China) in being too closely aligned.

“Some of their interests conflict; Russia could be squeezed out of the equation.”