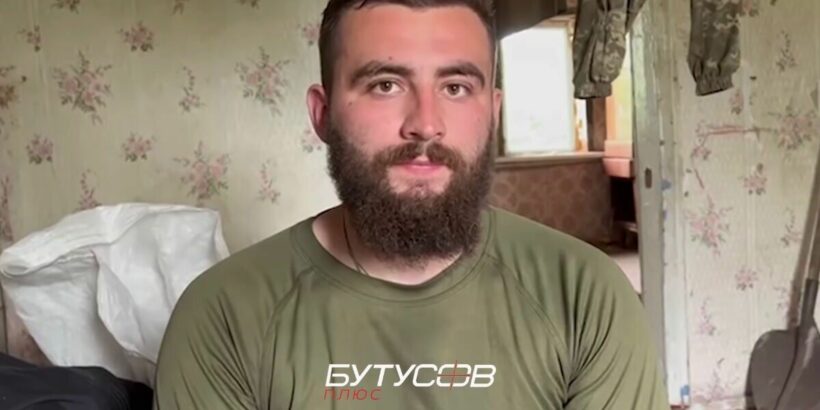 A Ukrainian soldier with the call sign Viking was captured by Putin’s soldiers while undertaking a military operation in the Chernihiv region. In a video, the 58th brigade soldier explained that he arrived in the Lukashivka region on March 6 and the area had not been properly explored prior to this.

He said that he and his fellow soldiers noticed military equipment belonging to Russian forces and 24 hours later the Ukrainians encountered a “surprise”.

He explains that from the front line appeared two civilian cars with children put on display, he claims this was done “on purpose”.

He notes that after the civilians passed by the direction of the village, enemies “started bombarding” the Ukrainian forces’ position.

On March 9, he notes how Russian forces had a “very convenient” position before launching separate convoys which he describes as outflanking Ukrainians in every direction.

He noted that one convoy remained on the hill where those acting on behalf of the Kremlin could view the whole perimeter of the village, effectively cutting them off.

He praised every soldier for showing himself “extremely bravely” noting that “everyone fought to the end” during the operation.

He explains that he approached the right flank and was able to find a position 200 metres from the enemy convoy where he describes he was “correcting artillery”.

While two Russian brothers, who were fighting on behalf of Ukraine in the same way their father had, approached the left convoy.

While in position, Viking noticed an enemy vehicle had driven up and infantry started coming out and surrounding his position.

Upon realising the seriousness of the situation, Viking ripped the antenna from his radio, turned it off and threw it away to prevent it from being seized by the Russians.

He and a fellow soldier hid their military IDs as seven tanks and one BMP armoured vehicle approached.

Following initial shots being fired the Ukrainians were then captured.

Viking said: “We regained consciousness only when we were being tortured”, before adding they suffered at the hands of the “enemy’s battalion commander himself”.

He said: “He met us with a baseball bat. I could not understand why he kept saying why are we fighting on their land against them.”

He explains that Russian forces then began to torture them and that he suffered five blows from the baseball bat while trying to extract information.

He was later kicked in the head five times while another soldier sustained stab wounds to his arm which impacted his nerve endings.

The Ukrainian prisoners of war were then loaded onto an MT-LB vehicle to be presented to the commander of the brigade “as a trophy”.

The vehicle was being driven to the locality of Ivanivka where the Russian brigade’s headquarters are located.

Before being put into the vehicles, the captured Ukrainians were tied up and a noose was placed around their necks, Viking explains as they “feared us even unarmed and tied up”.

The vehicle was initially being overseen by a tank which then pulled in front to overtake.

He noted that Russian mines were “right on the road” adding that the vehicle holding the Russian crew and the nine prisoners of war hit two mines before the tank drew up a little further before blowing up too.

He claims whatever struck the tank wasn’t as severe as the crew simply had a concussion.

He explains that he fell from the vehicle but was rescued by his fellow comrades who were able to cut him free from the noose.

He explains how Russian crews opened a hatch and called to the Ukrainians to help, but the men simply closed the hatch so they could try and make an escape.

The Russian troops burned inside the vehicle, while the nine prisoners of war managed to make their escape.

The group waited until it was dark in order to start moving, and Viking explains that luckily enemy forces hadn’t located the hidden phone he had on his person.

He was then able to contact his comrades to pinpoint his location and “that’s how we managed to get out in 12 hours.”

He and two comrades who were the least injured were able to assist the others in less fortunate conditions to return to their locality.

Following the ordeal, Viking explained the injuries sustained by the group as “shell fragment in the forehead, two knocked out spinal discs, a fractured ribcage and a damaged meniscus in the knee”.

He added: “A crack in the temporal section, three concussions, a closed head injury and frostbite of the feet” after the Russians took away their shoes.

Viking led the group to safety and has since returned to the frontlines again.

After finding out he didn’t have a hematoma in his head, Viking returned to the battlefield two days later.