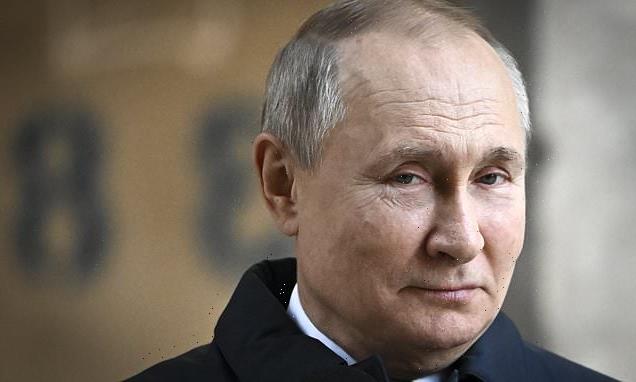 Putin investigated by International Criminal Court: Probe into Ukraine ‘situation’ going back to 2014 is announced after Zelensky accused Russia of WAR CRIMES

The International Criminal Court is set to open a probe investigating war crimes and crimes against humanity in Ukraine after invading Russian forces bombed the city of Kharkiv.

‘Today I wish to announce that I have decided to proceed with opening an investigation into the situation in Ukraine, as rapidly as possible,’ said ICC prosecutor Karim Khan on Monday.

‘I am satisfied that there is a reasonable basis to believe that both alleged war crimes and crimes against humanity have been committed in Ukraine’ since 2014, he added.

A rocket landed in front of the civilian public administration building in Kharkiv on Tuesday morning, destroying the road outside and blowing the windows out of the building itself.

Footage from inside shows the building was heavily damaged, with ceilings collapsing and rubble strewn around. 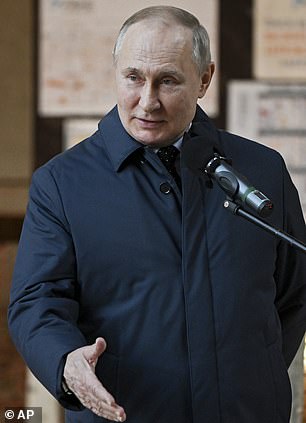 Zelensky said on Monday that Russia had ‘violation of all conventions’ in its attacks on Ukrainian people, adding there will ‘definitely be an international tribunal’ to investigate

The ICC’s comments follow Ukraine’s president Volodymyr Zelensky accusing Russia of war crimes after Vladimir Putin’s forces launched what were believed to be cluster and vacuum bomb attacks on the city of Kharkiv.

Zelensky said on Monday that Russia was in ‘violation of all conventions’ in its attacks on Ukrainian people.

‘Given the expansion of the conflict in recent days, it is my intention that this investigation will also encompass any new alleged crimes falling within the jurisdiction of my office that are committed by any party to the conflict on any part of the territory of Ukraine,’ added Kahn.

The Hague-based court began receiving queries last week ‘with respect to the crime of aggression’.

But because Ukraine is not a State Party to the Rome Statute of the ICC, meaning it has no representation within the Hague assembly, it was unable to refer itself.

‘I will continue to closely follow developments on the ground in Ukraine, and again call for restraint and strict adherence to the applicable rules of international humanitarian law,’ said Khan on Monday.

The ICC had already launched preliminary probes to investigate the violent suppression of pro-European protestors leading up to the Russian annexation of Crimea in 2014. 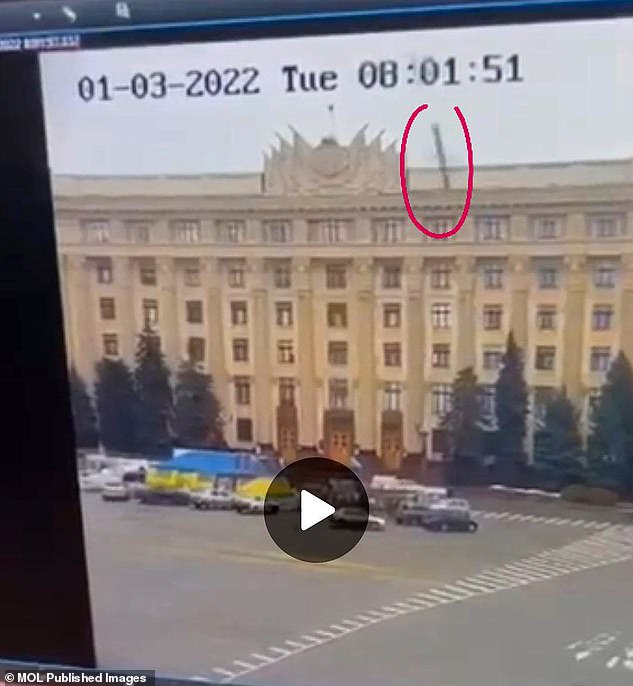 CCTV footage shown the Russian munition landing outside the civilian public administration building in the city of Kharkiv, with the missile circled in red

Russia’s invasion of Ukraine is being met with heavy resistance that has so far stalled its initial plan to seize key targets and infrastructure in precision strikes.

But the war is entering into a new phase, with the aim seemingly to surround and besiege cities such as Kharkiv, Kyiv, Mariupol, Sumy and Kherson.

The use of indiscriminate weapons on civilian targets echoes tactics Russia used against rebel forces in Syria while fighting alongside dictator Basahar al-Assad.

Satellite images revealed a column of Russian vehicles heading towards the capital Kyiv previously thought to be 4 miles long is actually stretches to 40 miles, with most of the units just 15 miles from the city.

Russia’s plan appears to be using the heavy armor to encircle and shell the city, before troops move in for street-to-street fighting.

A taste of what was to come struck Kharkiv on Monday when bombs rained down on the most Russia-friendly city in Ukraine – which sits 25 miles from the border and is home to 1.5million people – in a bid to break its will to resist.

The hail of bombs, shells and rockets which began falling at lunchtime left at least 11 dead, including three children, with homes and even a school reduced to rubble.

A military source told MailOnline that videos of the onslaught showed ‘cluster’ munitions – which are illegal under international law – had been used.

Later on Monday, Ukraine’s ambassador to the US claimed that Russia used a devastating vacuum bomb on Ukraine.

The vacuum bombs, which are also known as thermobaric weapons, can vaporize bodies and crush internal organs. They use oxygen from the surrounding air to generate a high-temperature explosion, typically producing a blast wave of a significantly longer duration than that of a conventional explosive.

Russia’s foreign ministry promised that it would hit back against the EU after the bloc imposed sanctions, ramping up tensions between Putin and the west.

A Russian spokesman also warned that ‘EU citizens and structures’ involved in sending weapons to Ukraine would be ‘responsible for any consequences’.

Amid the ongoing fighting, it was announced that Prime Minister Boris Johnson will on Tuesday fly to Poland to visit British troops manning Nato’s eastern border with Russia. 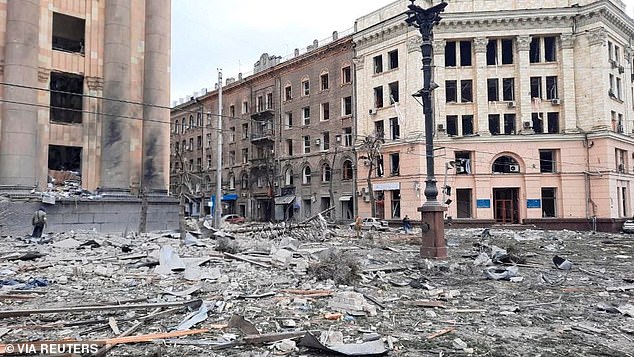 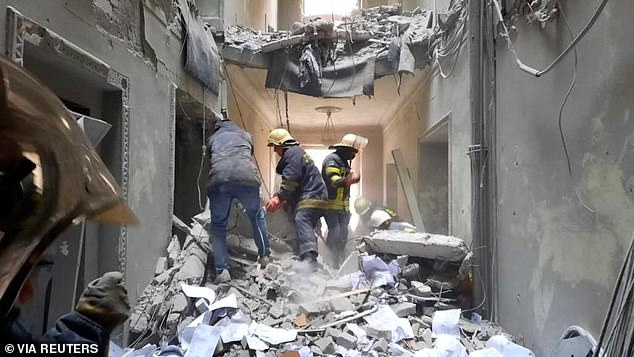 Rescuers are photographed in a building damaged by the missile strike