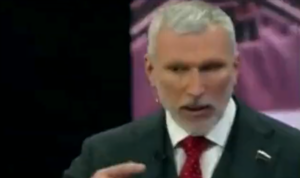 The Russian politician claimed that Germany and other NATO-aligned countries were escalating the war in Ukraine. He argued the escalation was due to NATO countries supplying Ukraine with weapons. Zhuravlyov threatened Europe with nuclear warfare, once again warning that Russia was a nuclear nation. Mocking Western leaders who have called for a ceasefire this week, Zhuravlyov discussed how Western countries think Russian forces will drop their weapons, and leave the occupied Crimean peninsula and other occupied territories in Ukraine when asked.

“Are they thinking that Russia will lose? It’s madness! It’s this moron really thinking we could lose?

“How is he imagining that? That tomorrow we’ll say sorry, we made a mistake. That we’ll get out of Crimea and everywhere else.

Zhuravlyov added: “Is that how he understands it? It can’t happen! In the end, you’ll be reduced to ashes.

“And Americans will say, oh well stuff happens, no big deal, just don’t fire at us.

“Don’t fire at us through the South Pole, that’s how it will be, but he doesn’t understand that.

“What is in this man’s brain, why can’t he understand? Meanwhile, they’re happy at Davos.

“Singing ‘na-na-na-na’ thinking everything is great in Europe.”

Volodymyr Zelensky’s negotiator Mykhailo Podolyak has rejected calls for a ceasefire between Russia and Ukraine during an interview with the news agency Reuters last week.

He claimed that the ceasefire would allow Russia to take a break from the battle, before coming back with greater strength.

Other NATO-aligned politicians have also called for a ceasefire, German Chancellor Olaf Scholz and US Defence Secretary Lloyd Austin being two of the main ones.

Mr Scholz has refused to remove harsh financial sanctions imposed on Russia for invading Ukraine, despite the threat of nuclear retaliation.

Mr Scholz has also been vocal about how he believes Russian President Putin has miscalculated his approach to the war in Ukraine.

The Chancellor said: “He didn’t think his entire Ukraine operation through.

“We won’t withdraw the sanctions unless he reaches an agreement with Ukraine, and he won’t get that with a dictated peace.”