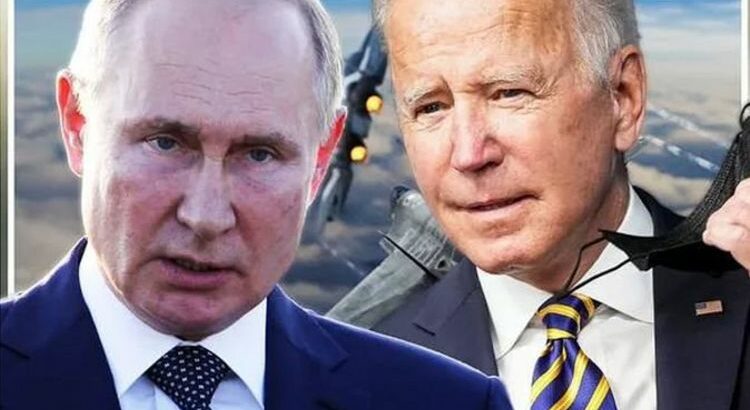 Putin will ‘push US administration to edge’ says Mike Pompeo

Vladimir Putin has sparked fears of a new conflict in Europe by having Russian troops amass on the Ukrainian border despite warnings from the international community to stand down. President Putin spoke with US President Joe Biden earlier this month, with the US leader seeking to put pressure on Moscow to avoid a new military row. But former Secretary of State Mike Pompeo warned Russia’s leader will seek to exploit the “weakness” President Biden exposed with his withdrawal from Afghanistan.

Speaking to Fox News, Mr Pompeo said: “Vladimir Putin has been on the stage for an awfully long time. He knows full well that Latvia, Estonia, they’re not going to invade Russia.

“He knows this, it’s a kind of victimisation to assert, somehow, he feels threatened from those countries for an invasion.

“He’s the one who raised the tension, the fault lies with him. But there’s fault in the Biden Administration too.

“When Putin saw what happened in Afghanistan, the terrible tragedy of 13 Americans being killed, a real weakness being shown.”

JUST IN: EU’s masterplan to be spearheaded by Merkel successor ‘what Germans and the French want’

The former Secretary of State continued: “Gave him the opportunity to finish his pipeline to have energy control over Germany.

“He saw American weakness and so what I think what you’ve seen over the past days and weeks is his building and putting pressure on the Americans.

“Looking for concessions, trying to achieve something through threats and coercion that he doesn’t want to do militarily.

“But he’s perfectly prepared to push the Biden Administration to the edge to see if he can get what he’d really like.”

Ukraine is a 'completely different country' to Russia says Koval

Interfax news agency reported more than 10,000 Russian troops have been returning to their permanent bases after month-long drills near Ukraine,

The news agency said the drills were held in several regions near Ukraine, including Crimea, which Russia annexed in 2014, as well as in the southern Russian regions of Rostov and Kuban.

Moscow’s deployment of tens of thousands of troops had fuelled fears in Kyiv and Western capitals that Moscow was planning an attack.

Russia denies any such plans, saying it needs pledges from the West – including a promise from NATO not to expand the alliance eastward towards Russian borders  – because its own security is threatened by Ukraine’s growing ties with the Western alliance.

The Kremlin also says that it can deploy its troops on its territory as it sees fit.

Estimates for the number of Russian troops recently moved closer to Ukraine vary from 60,000 to 90,000, with one US intelligence document earlier this month suggesting that number could be ramped up as high as 175,000.

The report said: “A stage of combat coordination of divisions, combat crews, squads at motorized units… has been completed.

“More than 10,000 military servicemen… will march to their permanent deployment from the territory of the combined arms’ area of drills.”