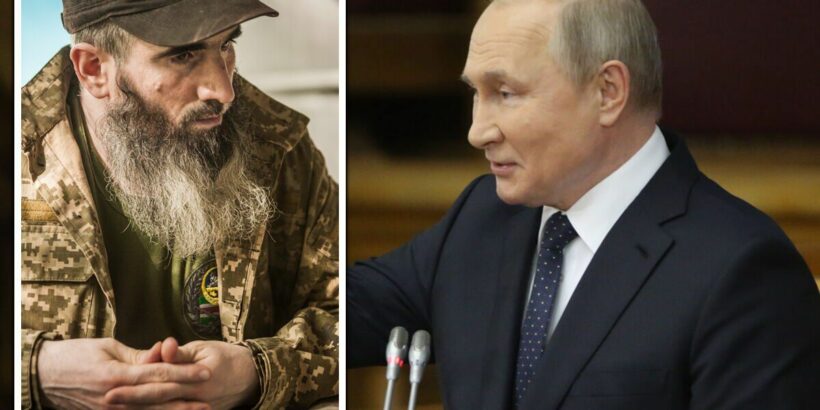 Ramzan Kadyrov, leader of Russia’s Chechnya region and a staunch ally of President Putin, claims to have sent 1,000 elite fighters to fight in Ukraine. The Chechen warriors often share videos of military drills online which has gained them a fearsome reputation. Eyewitnesses have claimed that a particularly ruthless sect of Chechen soldiers executed “heavily wounded” Russian troops in a “field hospital” that was situated northwest of Bucha.

Bucha, a residential suburb of the capital Kyiv, shocked the world in April after Ukrainian authorities found mass graves and evidence of torture after Russian troops had withdrawn.

According to residents of the town, the killer squad of Chechen fighters – known as Kadyrovtsy – had executed people as early as March 5.

Mr Kadyrov’s men have few friends in the Russian army, where resentment left over from bloody wars in Chechnya in the 1990s still runs high.

The Kadyrovtsy, who have been used as a PR tool in Putin’s war, allegedly murdered their own comrades and “operated a torture chamber” in a glass factory on Yablonska Street.

Deputy Commander of Ukraine’s Territorial Defence Forces, Artem Hurin, was one of the first to visit Borodyanka, northwest of Bucha after Ukrainian forces recaptured the town April 2.

Mr Hurin, who is also a member of the city council in the neighbouring town Irpin, said: “They would bring heavily wounded Russian soldiers to a big hospital they had there, and those who were very heavily wounded, they would just shoot them. No one other than the Kadyrovtsy did this.”

He told the Daily Beast a string of disturbing stories from residents who were tortured and raped by the Russian troops and witnessed “executed civilians” in the street.

One woman recalled how she endured four days of torture by one Kadyrovtsy soldier and one Belarusian soldier before they brutally shot her husband in the head.

Meanwhile, Bucha Mayor Anatoliy Fedoruk, claimed Chechen troops tied white bands around prisoners’ arms who were captured, which were similar to those found on the bodies of executed civilians in the city.

Mark Voyger, a senior fellow with the Transatlantic Defense and Security Program at the Center for European Analysis, told Express.co.uk that the Chechen warriors had been tasked with a particularly “sinister” role in the invasion of Ukraine.

The Kadyrovtsy are being used by Putin to control the Russian troops and keep them in line, he claims.

Mr Voyger told Express.co.uk: “What they’ve been doing – apart from the despicable atrocities like rapes and torturing and killing of civilians – it seems that they have been tasked with operating as the so-called ‘penal battalions’.

“It was a Soviet invention in the Second World War for when you have unwilling troops.”

Penal battalions are put in place to control disillusioned troops who are reluctant to advance when they are given orders by their officers.

Mr Voyger continued: “Since the Russian troops are suffering from low combat morale, especially the new recruits from among the Donbas regions, the Chechens are used as a force to ‘whip’ those new or unwilling soldiers into frontal assaults against Ukrainian forces.

“I’ve read reports where they act as penal battalions holding the line when Russian troops run from the frontline.

“Or I’ve also read about executions of Russian defectors or mutineers – troops that have been hit by mutiny have been dealt with extremely harshly by the Chechens.

“And so they have a special, very sinister role within the Russian military and that’s one of the key tasks they were ‘bred’ for.

“Putin designed the system to have a local governor of sorts in Chechnya who would breed such a force of terror for [Putin’s] disposal.”