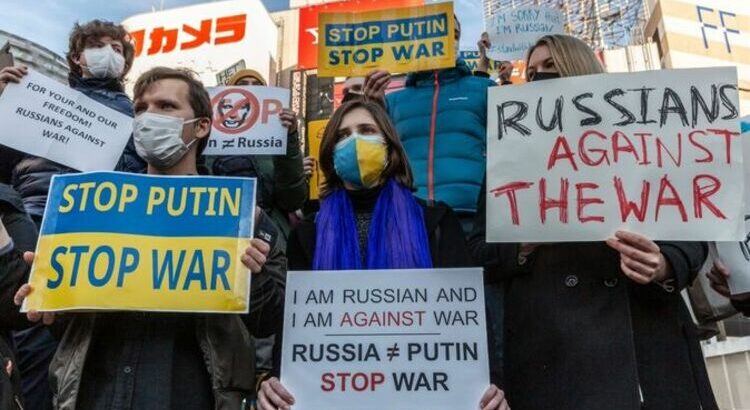 Thousands of young Russians crossed the border in recent weeks as Russian troops ramp up their attacks in Ukraine. People have escaped to Finland, Georgia, Armenia and beyond, fearful of Putin cracking down on opposition to the conflict as the country becomes isolated from the rest of the world.

The country’s economy is in free-fall as Western nations tighten unprecedented sanctions. The invasion is now in its fourth week.

Young Russians are increasingly fearful that the conflict will deprive them of their future and freedom, as the nation teeters on economic collapse and rumours grow Putin could be preparing to enforce martial law to clamp down on growing opposition to the war.

Many are thinking about leaving as Russia is ostracised from the international community amid reports that Putin may be ready to shut the country off from the global internet.

Officials in Georgia have said 20,000 to 25,000 Russians have already crossed the border while thousands more are reported to have fled to Finland, Armenia and Kazakhstan, The Telegraph reported.

Armenia estimated last week that 6,000 people from Russia and Ukraine were arriving in the country every day.

There are concerns within Russia that a crippling “brain drain” will deprive the country of growth while its economy flounders, with young workers and entrepreneurs fleeing the country in response to the invasion.

Many young people have already left the country due to fears the Kremlin could close its borders to stop an exodus.

One young Russian, Aleksandr, who did not use his real name, told The Telegraph many of his friends had already left in an attempt to save “dreams, plans and relationships that all went to s***” after the invasion.

He said: “There’s basically no way left to get a good income unless you’re into corruption, connections, or straight out crime.

“There’s rumours of Russia being disconnected off the internet. If that happens, I’m done with this country. I don’t want to live in a bigger North Korea.”

Another, 30-year-old Igor, who also did not use his real name, told the publication he wants to move to London.

There are reports the Kremlin, which has already heavily censored online activity in Russia and banned companies including Facebook from operating in the country, could be preparing to shut off from the global internet entirely.

Meanwhile, Russians are subjected to an endless stream of propaganda from Russia’s state-owned broadcasters which are not even allowed to name the crisis in Ukraine as a war.

But opposition to the brutal conflict is growing louder in the country, with widespread protests and demonstrations making headlines in international media, including the bravery of Russian TV editor Marina Ovsyannikova who interrupted a news broadcast to protest.

Many young people are fearful the Kremlin will intensify its crackdown on dissent as public opposition to the war grows louder, while Russian troops reportedly struggle on the battlefield in Ukraine where approximately 7,000 of Putin’s soldiers are estimated to have died.

World Bank data from 2020 reveals 17 percent unemployment for those ages between 15 and 24, which is far higher than the overall figure of four percent.

A high proportion of Russians were considering moving abroad before the war in Ukraine, with the country’s economy already stuck in stagnation since 2014 following the crash in the price of oil and sanctions levelled against Moscow in the wake of its annexation of Crimea.

According to a 2021 survey by the independent Levada Centre, 48 percent of people aged between 18 and 24 said they would like to move abroad permanently compared to a fifth of all Russians.

The survey found a tenth of Russians were already taking steps toward leaving the country.

Experts believe the invasion will be the final straw for thousands of young Russians, whose departure will leave the country struggling to recover from the economic and political toll of the war in the coming years.