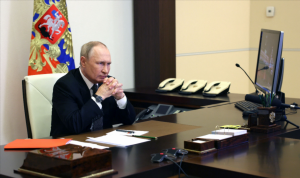 Mr Browder explained that Western governments had done well with the imposed sanctions on Putin’s savings so far but claimed that not enough had been done to sanction his income stream. The British-American financier explained that Putin was still receiving money from the purchases of oil and gas, which was allowing him to buy weapons from countries like Iran and North Korea in order to cause mass destruction in Ukraine.

“But we’re still not doing a very good job of sanctioning his income.

“He still gets all this money from the sale of oil.”

The radio host added: “And used to be oil and gas, gas and if he gets all that income, what can he do with it?

JUST IN: Victoria Beckham shuts down any chance of Spice Girls reunion: ‘Leave it there!’

Mr Browder added: “I don’t want to say we because I’m not involved in this, but people are paying him dollars for gas and oil.

“And he takes that money and then he goes and gives it to the Iranians to buy drones to kill Ukrainians and bomb their power plants so they freeze in the winter.

“And giving money to North Koreans so that he gets shells and artillery and missiles from the Koreans because he needs more equipment for all this stuff.

“And so, you know we need to make sure he doesn’t have that money.”

Many Russian oligarchs have been sanctioned in order to try and impact Putin economically and stop him from syphoning funds.

Despite calls from Western leaders for other global governments to do so.

Former heavyweight boxing champion Vitali Klitschko has become Kyivs Mayor and has been calling on the West to impose more sanctions on Russia.

Mr Klitschko said: “Yes, of course. Russia doesn’t use money from [trade] partners to invest in its economy, they invest to make their army much stronger.”

“Because Russia destroyed all international rules and made the biggest war in Europe since the Second World War.

“We need much more support, it’s simply not enough.”