Moscow: As Vladimir Putin begins his fourth term as Russia's president, his image is ubiquitous at home and effectively Russia's "brand" worldwide.

As he was sworn in, Putin promised Russians an "economic and technological breakthrough" and reappointed his long-serving Prime Minister, Dmitry Medvedev, amid the deepest standoff with the West in decades. 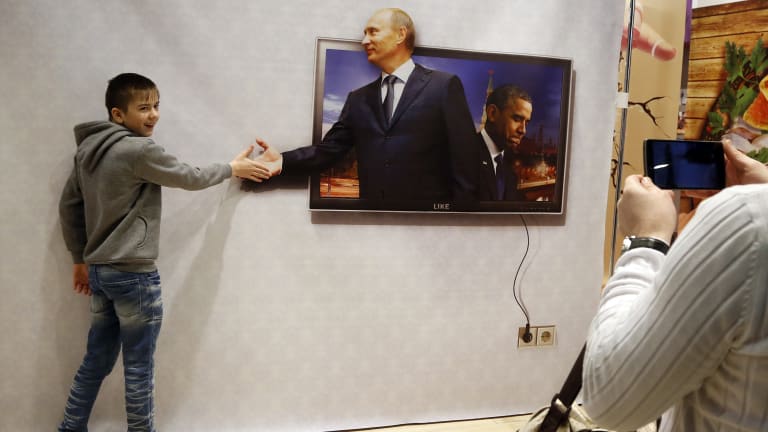 At Sheremetyevo International Airport and souvenir stands throughout Moscow, Putin's sober, stern visage gazes out from t-shirts, mugs, matryoshka nesting dolls and fridge magnets. Sometimes, the images combine respect with a touch of humour, such as the popular portrayal of him riding a bear, his shirtless torso showing impressive muscles.

"Putin has started to shift from the image of the fighter and a miracle-maker to the image of a considered man and the leader of a young team," says Yevgeny Minchenko, a Moscow-based political consultant.

"He's now a wise ruler, who doesn't go solving the issues at hand, but he sets a strategic course and appoints talented young people who are able to implement this course." 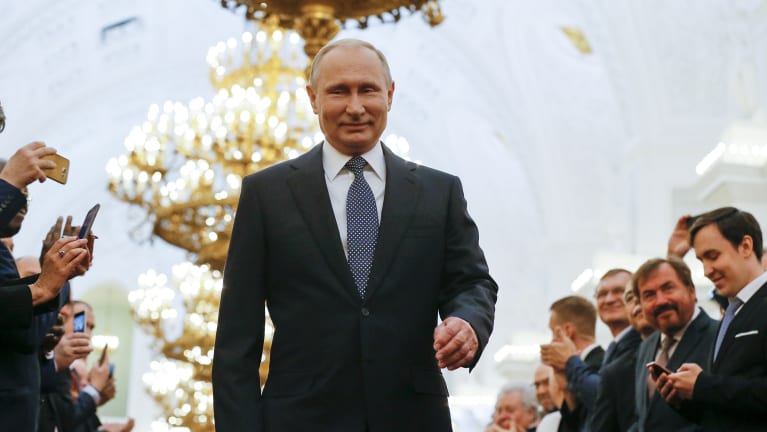 Vladimir Putin enters to take the oath during his fourth inauguration on Monday.

Although his face is widespread, the portrayal stops short of the omnipresence that characterises personality cults such as those of Kim Jong-un in North Korea or Turkmenistan's Gurbanguly Berdymukhamedov.

"He's a person of a European culture. All these Asian things are sort of unpleasant to him. Putin's nature is quite reserved. So to him, as a professional spy, the grotesque displays of loyalty are suspicious rather than pleasant," says Minchenko. 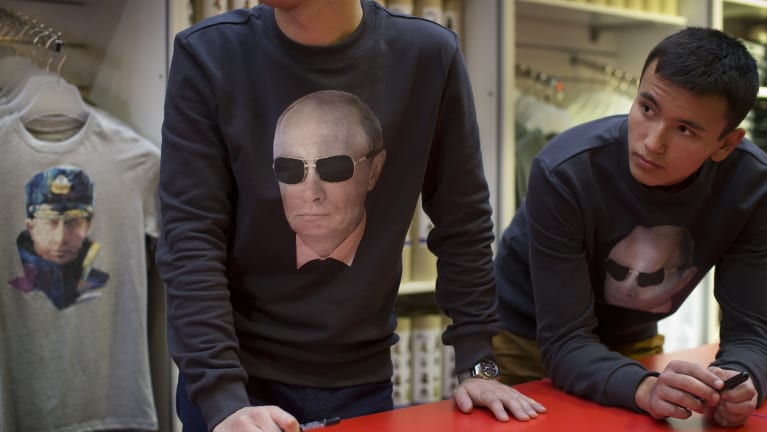 Gleb Kraynik, one of the designers behind the Syet project, said Putin is "without a doubt the country's brand".

"If before when you asked a foreigner what he thought of when he thought of Russia, he'd said: matryoshka, balalaika, caviar, vodka. Then now whatever opinion he has on our president, he'll say Putin," he said.

Despite Putin's ubiquity, his country has struggled to get its economy back into high gear even as oil prices have doubled over the past two years.

Slow growth threatens to reverse Russia's rise in the ranks of global economies under Putin and undermines the Kremlin's ability to pay for its military buildup. 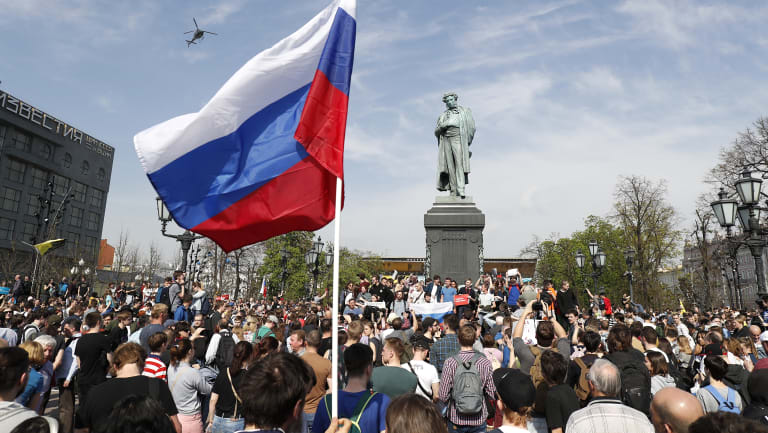 Those who argued for reducing conflicts with the West in order to focus on economic development are on the defensive after four years of steadily increasing Western sanctions have isolated Russia's biggest banks and companies from vital financing and technology.

Medvedev said he plans to promote Finance Minister Anton Siluanov, known for his adherence to strict budget discipline, to the role of first Deputy Prime Minister responsible for financial and economic policy. Medvedev laid out his plans for top cabinet appointments, many of them familiar faces, in a meeting with legislators from the ruling party.

Putin is considering appointing Alexei Kudrin, a former finance minister respected by investors for the pro-market overhauls he led in the Russian leader's first two terms, to a new Kremlin post to lead efforts to revive economic growth, according to officials familiar with the plans. Kudrin, who has called for easing tensions with the West, would be charged with helping rebuild economic links with the US and Europe.

"We must now use all available resources to resolve our most urgent domestic tasks," Putin, 65, told supporters and officials gathered for the inauguration ceremony in the Kremlin.

"Over its more than thousand-year history, Russia has repeatedly faced times of troubles and trials and has always been reborn like a phoenix," he said. Putin's new term is likely to be his last because of constitutional term limits; he's already the longest-serving Russian ruler since Josef Stalin.

Putin rode from his Kremlin office to the nearby hall for the inauguration in a black Russian-made stretch limousine for the first time rather than a Mercedes as in the past. After the swearing-in ceremony, an artillery salute fired and Putin descended to the courtyard below to mingle with hand-picked supporters. 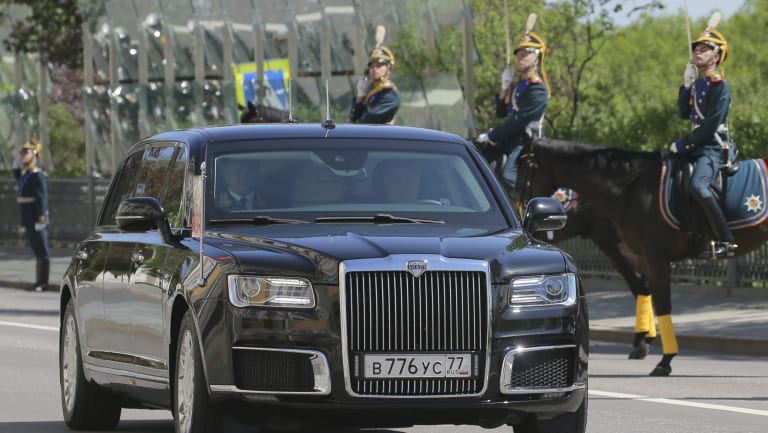 For the first time, Putin rode in a limousine made in Russia rather than a German-made Mercedes.

Public support for Putin remains strong, according to polls, but opposition simmers below the surface. More than 1600 were detained by police in 27 cities across Russia Saturday at "He's Not Our Tsar" protests against his nearly two-decade rule, according to activists.

Putin laid out his goals for the new term in a decree signed on Monday, calling for faster economic growth that would make Russia the fifth-largest economy in the world, up from twelfth now, as well as improvements to health care, education and infrastructure. The document set ambitious goals for everything from increasing birth rates, life expectancy and labor productivity to building more roads.

"The task now is to overcome the technological lag behind the West while surrounded by unfriendly forces abroad," said Evgeny Minchenko, a Moscow political consultant who works with the Kremlin. Modernisation will be "authoritarian," he said.

At present, while the Kremlin is eager to avoid further increase in geopolitical tensions, there's no readiness to take a softer line, say Kremlin and government officials.

"Moscow doesn't have any interest in further escalation with the West, which will have negative political and economic consequences for it," said Andrei Kortunov, head of the Russian International Affairs Council, a research group set up by the Kremlin.

"But it's not prepared to do anything that looks like a one-sided concession."