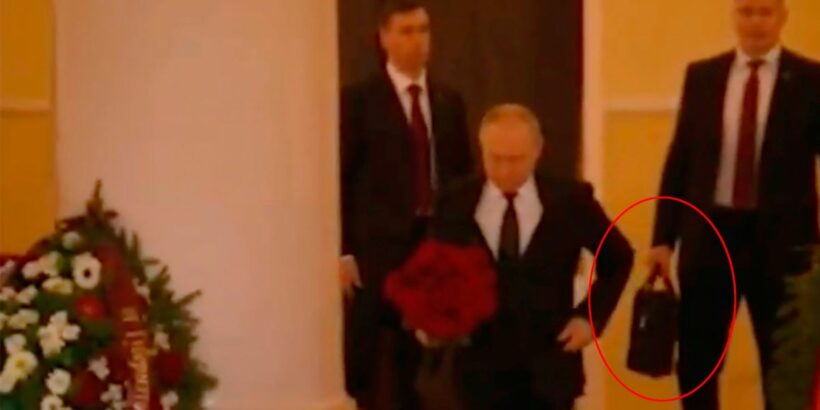 Russian president Vladimir Putin has been spotted at a funeral in Moscow alongside a military officer who was carrying what was believed to be the Russian nuclear briefcase.

The cathedral in which the funeral was being held was also cleared of attendees amid fears of an assassination attempt on the Russian President.

Mourners were removed from Christ the Saviour Cathedral in Moscow as Putin went to pay his respects to the far-right ultranationalist Vladimir Zhrinozsky, the Mirror reports.

A man wearing a dark suit was seen close by to Putin carrying a briefcase which could be the Russian equivalent to America's "Nuclear Football" – a device capable of authorising a nuclear strike.

Although such a device is designed to be within reach of the Russian president at all times, the fact that it has been shown off at a public event is a chilling reminder of Putin's thinly-veiled threats about "consequences you have never seen in your history" which he made to Western nations when Russian forces invaded Ukraine.

The ejection of mourners from the cathedral is the latest in a long line of increasingly paranoid measures that Putin has taken to protect against assassination attempts, with the measure showing a lack of trust even in his own supporters.

There were also no armed guards standing by the coffin when Putin approached to pay his respects.

Distancing could also be motivated by a fear of catching covid, which has been a concern as informed speculation mounts that Putin is suffering from thyroid cancer.

The scenes were markedly different from how former president Dmitry Medvedev paid his respects, as mourners were allowed to remain in the enormous and crowded building.

For Putin however, mourners were ordered to leave to allow him to pay his respects.

“For Vladimir Putin, the hall where people bade farewell to Zhirinovsky was completely emptied of people – even from relatives on chairs,” reported Telegram channel VCHK-OGPU.

As Putin entered the church he was seen in a black tie, followed by a man closely behind him with his entourage who were carrying the suspected nuclear briefcase.

Putin entered wearing a black tie, while a man closely behind him in his entourage carried the suspected nuclear briefcase.

Mr Putin picked up a bunch of red roses and placed them at the bottom of the coffin and then made the sign of the cross in front of the open coffin of Mr Zhirinovsky.

Vladimir Zhirinovsky was a far-right politician and head of the ultranationalist Liberal-Democratic Party, who died 15 weeks after predicting in advance the date of Putin’s invasion of Ukraine.

His speech to MPs accurately predicting the invasion was seen as annoying the Kremlin.

He fell ill soon afterwards, reportedly with coronavirus – despite boasting that he had received eight Covid jabs – and had remained in hospital since in a grave condition.

He could now be succeeded by Andrei Lugovoy, 55, who is wanted in Britain on suspicion of murdering Putin foe Alexander Litvinenko by spiking his tea with deadly radioactive polonium-210 in London in 2006.

Putin is seen as having in recent years embraced the hardline views of Zhirinovsky.